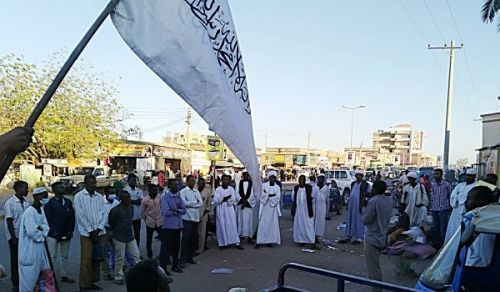 On the occasion of the painful centenary of the demolition of the Khilafah (Caliphate) on 28 Rajab 1342 AH; the Muslims’ State that by its destruction, the rulings of the Lord of the worlds in governance, politics, economics and so on were absent, the Muslim countries were torn apart, the Kafir colonial West dominated them, our glory was lost, our dignity was violated, our honor was desecrated, our wealth was plundered, our blood was shed and our lives were lost so we became like orphans at the tables of scoundrels. And as a reminder to the Ummah of its miserable condition, and to revive the people’s endeavor to work in order to bring it back as rightly-guided upon the method of the Prophethood. And with the guidance of the Ameer of Hizb ut Tahrir, Eminent Scholar Ata Bin Khalil Abu al-Rashtah, may Allah protect him and take care of him and send victory at his hands, Hizb ut Tahrir / Wilayah Sudan commemorates this occasion during the month of Rajab 1442 AH, where the events of the first week were as follows:

1- The Ummah’s Affairs Forum, entitled: “The Demolition of the Khilafah (Caliphate) and the Subsequent Tribulations that befell the Ummah,” was held on Saturday, 1st of Rajab Muharram 1442 AH, and the forum was broadcast on the Omdurman satellite channel, where two papers were presented; The first is entitled: “How the Khilafah was Destroyed and what did the Ummah Lose?” presented by Ustadh Al-Nazir Mukhtar – Member of Hizb ut Tahrir, and the second paper entitled: “Capitalism Scorches the World, and the Caliphate Revives it” was presented by Ustadh Nasser Ridha – Head of the Central Communication Committee – Hizb ut Tahrir Wilayah of Sudan.

a- North Kordofan State, city of Al-Abyad – Tuesday, 4th Rajab 1442 AH corresponding to 16/02/2021 CE with the title: “How the Khilafah was destroyed and what did Muslims lose by demolishing it?”

d- Omdurman North – Tuesday, 4th Rajab 1442 AH corresponding to 16/02/2021 CE with the title: “On the centenary of the demolition of the Khilafah, what happened to the Muslims and the world and the misery that has befallen them.”

3- As of Saturday, 1st of Rajab 1442 AH, the Shabab of Hizb ut Tahrir / Wilayah Sudan entered into a diligent work of distributing small-sized but large in meaning posters that remind the Ummah of the Khilafah, and what the Ummah had suffered as a result of its demolition. The posters were widely distributed to the owners of different cars, and in the shops, as well as large banners were placed in the markets, transportation stops and bridge entrances in the three cities of the capital (Khartoum – Bahri – Omdurman) and other cities in Sudan.

And with the permission of Allah, this movement, which includes discussing with the people in the markets, roads, public places, and so on, will continue until the end of the Holy month of Rajab, or Allah permits the establishment of Second Khilafah Rashidah (Rightly Guided Caliphate) on the Method of Prophethood, and that is not difficult for Allah.