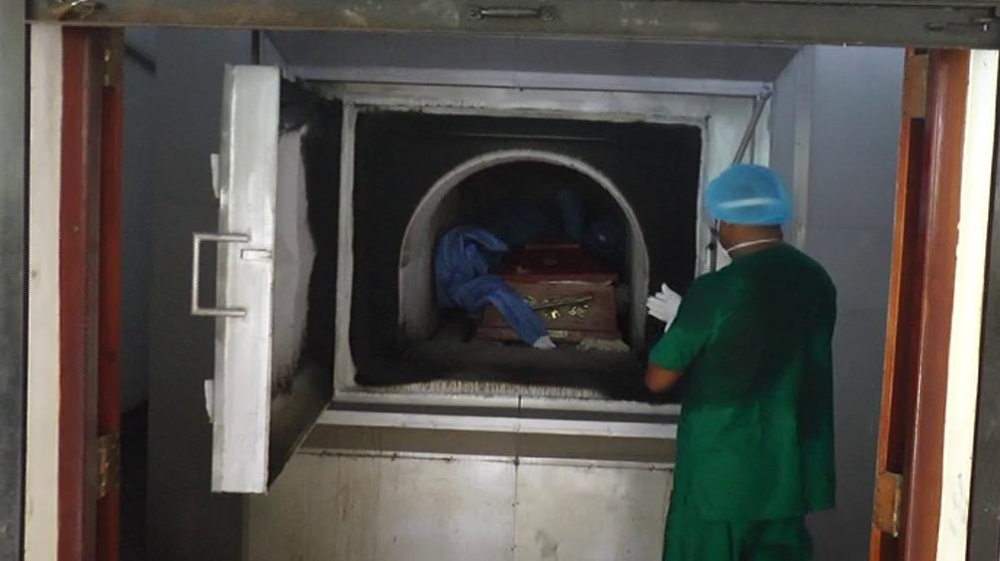 On Tuesday 1st December, Sri Lanka’s Supreme Court rejected civil society petitions and judicial cases brought by Muslim and Christian families in the country, challenging the government’s policy mandating cremation for all Covid-19 related deaths or any dead body suspected to be infected with the virus, irrespective of religious beliefs.

The communal-minded Buddhist nationalistic Sri Lankan government ignored guidelines from international renown medical and scientific experts as well as the World Health Organisation who stated that Covid victims could be buried safely without any danger to public health. Instead, it sought to exploit the pandemic to further its anti-Muslim, anti-Islam agenda by issuing regulations in April stating that “all COVID-19 victims will be cremated within 24 hours of the death”, knowing full well that this action violates the fundamental beliefs of Muslims as Islam views this as a desecration of the deceased body. Since the issuing of the policy, more than 50 Muslims have been cremated.

In fact, reports have emerged that several of the Muslims whose bodies were cremated by authorities had not been tested for Covid or had even tested negative. One Muslim man who found that his mother had been wrongfully cremated said: “The day my mother died at hospital, they took her body away and then handed me a pot of her ashes. But the next day they told me that my mother’s test was negative and it was a mistake cremating her. Every night I wake up and think of mother’s fate. We are poor and we do not have the means to demand justice or fight the authorities.” (cited in the UK Guardian). Sri Lankan authorities are even asking Muslims to pay the 48,000 (£192) fee demanded by the state to cover the cost of cremation. Since many Muslim families are refusing to do so for fear that they will be complicit in the desecration of their loved ones. Muslim Covid-19 victims have begun to pile up in hospital morgues. Muslims are therefore being forced to effectively abandon their dead.

Muslims in Sri Lanka are not only living in fear of being infected by Coronavirus, but also in fear of the virus of anti-Muslim hatred being spread in the society by a communal nationalistic regime, supported by their extremist Buddhist backers. Muslim families, while grieving their dead, have also to suffer the additional anguish of being denied the right of performing the last religious rites of their loved ones of burying them in peace. Many Muslims are even in fear of seeking hospital treatment for other serious conditions, terrified by the thought that if they were to die while in hospital as the authorities would take away their bodies for cremation even without testing for the virus.

This baseless cremation policy has been implemented out of nothing but spite against the Muslims by this regime. One Sri Lankan writer put it aptly in the following words: “The government is going out of its way to hurt the most core sentiments of the Muslim community”. However, this is not surprising. Hostility towards the Muslim population in Sri Lanka has been brewing for years, stoked primary by Buddhist anti-Muslim nationalistic groups, such as Bodu Bala Sena (BBS) and firebrand Buddhist monks who draw inspiration from their counterparts in Myanmar. They are allowed to operate freely and are propagating the absurd inflammatory narrative that Sinhala Buddhists in this Buddhist-majority country are under threat from overpopulating Muslims (comprising less than 10% of the population). In recent years, such venomous anti-Muslim and anti-Islam rhetoric has become mainstream, expressed openly by politicians, journalists and on social media. The Muslim community has been battling systemic Islamophobia for years, and has lived under a cloud of suspicion and abuse, especially following the 2019 Easter bombings, facing violence and vilification. Muslim women wearing hijab have been harassed and told to remove their headscarf when entering various shops or buildings, or when accompanying their daughters to school entry interviews; a ban on niqab was implemented; there was a campaign against the ‘Halal’ labelling of food; Muslims have faced arbitrary arrests and discriminatory police searches of their houses for Islamic material; outright lies have been spread about Muslims and the Deen; and there have been many mob attacks on mosques and Muslim homes and businesses. Indeed, the current nationalistic ruling party, led by the Rajapaksa brothers, who have close ties with the BBS, were elected with a landslide victory, on a wave of anti-Muslim hard-line Buddhist sentiments. Many Muslims in the country now fear that they may face the same fate as their Rohingya Muslim brothers and sisters in Myanmar.

This heart-breaking reality facing Muslims in Sri Lanka is a stark reminder just how dangerous and unpredictable secular and indeed any man-made system of governance is, where the religious and other rights of people, especially minorities, can change like the wind according to the prejudices and hatred of those who rule, and where those who are oppressed are left effectively powerless under the system to overturn injustices against them. It should therefore also be a strong reminder to Muslims that they should never place their hope and trust in any democratic man-made system of legislation to secure their interests and rights. The Prophet ﷺ said, «لا يلدغ المؤمن من جحر واحد مرتين» “The Muslim is not bitten from the same hole twice.” Furthermore, it should be as clear as night and day that there is no democratic or any other government, ruler, state or international body today – in the Muslim or non-Muslim world – who has the sincere political will to come to the aid of the Muslims of Sri Lanka, or indeed the oppressed Muslims anywhere in the globe today.

So we call the Muslims of Sri Lanka to turn their attention and their efforts to the true solution to their plight, which is the urgent re-establishment of the System of Allah (swt): the Khilafah (Caliphate) based on the method of the Prophethood, which is the only state which will stand as the true guard over their wellbeing and Deen, using all political, economic and even military tools in its arsenal to protect their rights as it did for Muslims in the past, for the Prophet ﷺ said: «الإِمَامُ رَاعٍ وَهُوَ مَسْئُولٌ عَنْ رَعِيَّتِهِ» “The Imam (Khalifah) is a guardian, and responsible (and will be questioned) for his subjects.” Indeed, without this state, Muslims cannot even die with dignity.