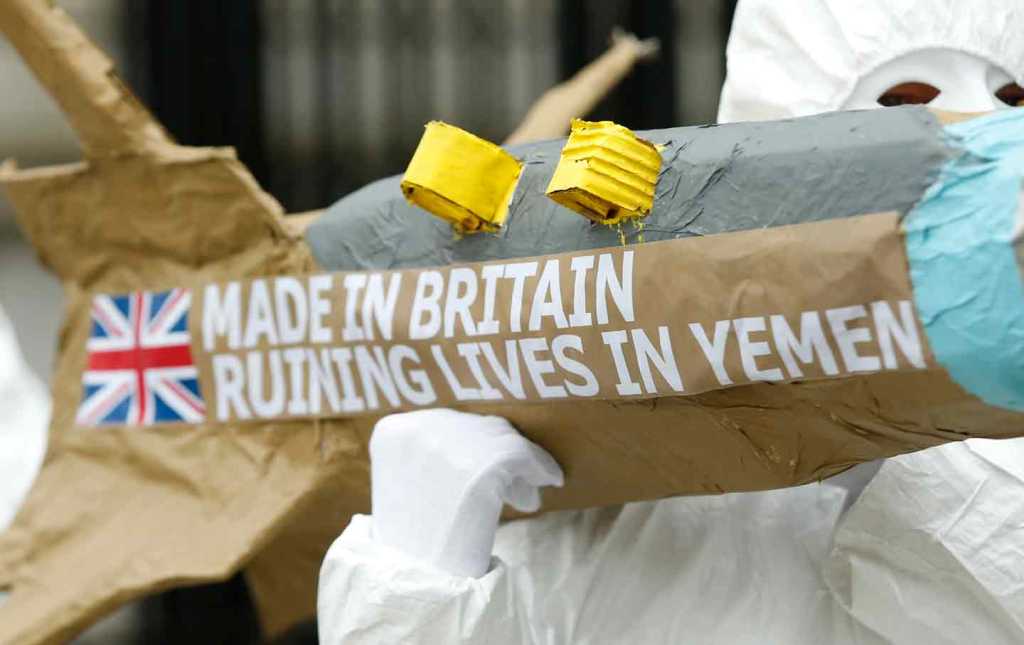 The independent charitable organization Oxfam IBIS released a report 9th of December 2020 exposing that the major pension funds in Denmark are investing hundreds of millions of dollars in American arms companies and defense contractors that are well-known for arming and supplying the Saudi and Emirati armies in the Yemeni war.

A few months ago, on July 7, the United Kingdom announced that it intends to resume approving weapons sales by British companies to Saudi Arabia. US companies, such as Raytheon delivers missiles to Saudi Arabia, Airbus supply the Saudi army while Lockheed Martin supports the UAE with guided rockets and missiles, just to mention some of the American companies involved.

The Western states are openly supporting, supplying and helping the Saudi and Emirati armies in their massacres in Yemen. This is happening even though the UN passed the Arms Trade Treaty in December 2014, which prohibited export of arms that end up “being used for human-rights abuses”.

Bombing of civilians, men, women and children in Yemen, would be categorized as a “human-rights abuse” by many people, which once again shows the lie of the so-called international law, which is only used when it serves the interests of the imperial major powers.

The catastrophic situation in Yemen is beyond description and the whole world is witnessing how the oppressed people of Yemen are suffering from starvation, diseases, expulsion and killings. All sponsored by the same hypocritical countries, which claim to be champions of “human rights”. They are clearly showing the world they have no regard for human life when the victims are Muslims.

It was narrated that ‘Abdullah bin ‘Amr said: “I saw the Messenger of Allah ﷺ circumambulating the Ka’bah and saying: «ما أطْيَبَكِ وأطْيَبَ ريحَكِ، ما أعْظَمَكِ وأعْظَمَ حُرْمَتَكِ، والذي نفسُ محمّدٍ بِيَدِهِ، لحرمةُ المؤمنِ أعظمُ عند اللهِ حرمةً منكِ: مالِهِ ودَمِهِ» “How good you are and how good your fragrance; how great you are and how great your sanctity. By the One in Whose Hand is the soul of Muhammad, the sanctity of the believer is greater before Allah than your sanctity, his blood and his wealth.” (Narrated by Ibn Majah)

It is truly saddening to witness the helpless situation of the Muslims in Yemen. They are killed by weapons made in the West, but their killers are the Arab armies and so-called Muslim rulers. Instead of using our wealth and military capacity to free Jerusalem and the occupied Muslim lands, they are being used against are brothers, sisters, sons and daughters. It is indeed a heinous crime, and the corrupt rulers must be removed now to rescue are brothers and sisters and Yemen from all this oppression and these atrocities.