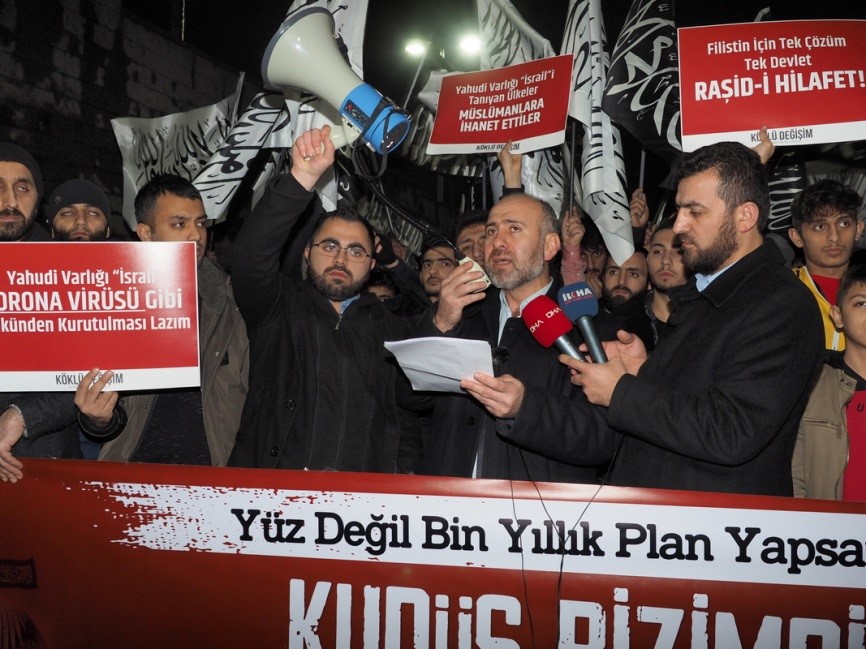 On Tuesday evening, January 28, 2020, the arrogant US President Trump and Prime Minister of the usurper Jewish entity Netanyahu appeared in front of the screens in the White House and announced the peace plan, which they called “the deal of the century.” They declared with arrogance and recklessness the conspiracy that they have woven against Palestine, and how they would cleanse the Muslims from the blessed land under the allegations of the peace plan.

We in Hizb ut Tahrir / Wilayah Turkey moved on the same night as soon as we heard the announcement and we made a press statement calling for a collective action in 15 cities. At the beginning of Wednesday, on January 29th, we held a rally in front of the American Consulate in Istanbul, and then organized a march in which large crowds of Muslims participated after the Friday prayers of January 31st in Ankara, Bursa, Gaziantep, Hattay, Qahraman Marash, Mersin, Izmir, Tetouan, Van Yalova, and concluded it with a press statement. Finally, we delivered a press release on Sunday 02 February in the cities of Antalya, Aydın and Chanli Urfa.

In the press release about the “Deal of the Century” plot, the following messages were included: “When considering the content of this dirty and deadly plan, we find the monotheistic Jerusalem as the capital of a Jewish entity, and the Palestinians were given 4 years to achieve the conditions necessary for establishing a state, and the usurping Jewish entity can annex and expand settlements in the West Bank.  Also, nearly 6 million Palestinian refugees are deprived of the right to return to their homes. As well as, three-quarters of the blessed land will be handed over to the Jews, and the alleged Palestinian state, which has no value in the remaining quarter, will be created.”

We told the rulers of the Muslims: “Aren’t the attacks that take place in Palestine are in fact attacks against your Muslim brothers, their honour and their wealth, and your sanctities and your religion? Wouldn’t the cries of the women, the tears of the children, the mothers’ wailing and the blood of the martyrs be enough for your movement?! How long do you wait and your armies abound in soldiers who love martyrdom as the Kuffar love life. Your barracks are full of weapons depots awaiting use, and your fortunes that have no limit?! Do these arrogant and arrogant stances of America and the Jewish entity not disturb you, and these reckless statements that do not value anything, and plans that are filled with tribulations?”

We also said, “The true original solution to the issue of Palestine lies in removing the elements that created it, and the fundamental solution to it lies in uprooting the Jewish entity from the blessed Al-Aqsa Mosque, and that all the plans for other solutions are futile and cannot be accepted.”

We thank all our Muslim brothers who have participated with us, and we ask Allah (swt) to accept from them, and Jerusalem will be liberated from the Jews as it was liberated from the Crusaders, and tomorrow to its viewer is nearby, this will definitely happen, Allah willing, and our Lord the Almighty says: وَلَتَعْلَمُنَّ نَبَأَهُ بَعْدَ حِينٍ “And you shall certainly know the truth of it after a while” [Saad: 88].