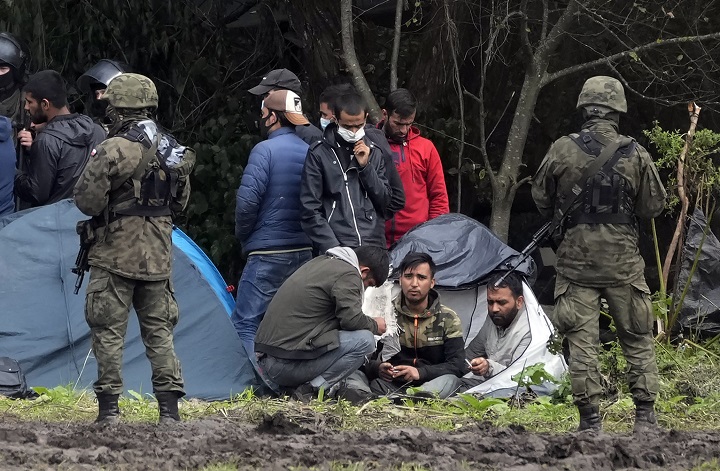 “…if they gain dominance over you, they do not observe concerning you any pact of kinship or covenant of protection…”.[TMQ Surah At-Taubah: Verse 8]

The Russian invasion of Ukraine that erupted on the 24th of February this year has resulted in a massive refugee crisis that has seen Europe open wide their national borders, welcoming more than three million Ukrainian’s in less than 2 weeks! This extraordinary response from Europe has revealed their potential to manage this massive refugee crisis due to a strong Eurocentric, racist political will demonstrated by European leaders and the Western media.

The European Commission President Ursula von der Leyen proclaimed this point when she said, “Everyone who has to flee Putin’s bombs will be welcomed with open arms.”

Consequently, Ukrainians since 2017 are immediately granted temporary protection, enabling men, women and children, together with their pet animals, permission to enter the EU bloc without a visa or a pet passport and they can choose which country they decide to go to without having to go through the asylum system.

Mattias Tesfaye, the Danish minister for foreign affairs and integration, has also echoed Denmark’s Eurocentric preference to protect Ukrainians when he said, “When there is war in Europe and a European neighbour are exposed to what we see in Ukraine, there is not the slightest doubt in my mind: We must help as best we can … by welcoming Ukrainians on Danish soil.” The Danish Government, furthermore, is facilitating this welcoming to Ukrainians with legislation that will suspend asylum rules for them. Rasmus Stoklund, the foreign affairs spokesperson for Denmark’s ruling Social Democratic Party, told CNN. “They won’t be part of the asylum system,” Instead, the proposed law will make it easier for Ukrainians to receive residency permits “so they can quickly start in school, on an education or in a job,” according to a statement by the Danish immigration and integration ministry.

The former Liberal Party Immigration Minister, Inger Stojberg, whose party pushed through the so-called jewellery bill, also expressed her frank racist Euro-Christian views when she wrote on Facebook (9/3/22). “We might as well be honest about the fact that we would rather help Ukrainian refugees than Somalians and Palestinians “No one dares to say it like it is: It’s because the Ukrainians are more like us and because they are primarily Christians.”

Then there is the Bulgarian Prime Minister, Kiril Petkov, who said: “These people are intelligent; they are educated people…. This is not the refugee wave we have been used to, people we were not sure about their identity, people with unclear pasts, who could have been even terrorists.” Finally, and unequivocally the leader of the Spanish Far Right party Vox, Santiago Abascal, said while receiving a round of applause addressing Spain’s Parliament, “These are real refugees: women, children, and elderly should be welcomed in Europe. Now everyone should understand the difference between these refugees and the invasion of Muslim youth of military age who have crossed our borders trying to destabilize and colonize Europe.”

Western media outlets have also expressed loudly and clearly their racist and barbaric attitudes of one law for Europeans and another for Muslims and Africans.

While on air, CBS News senior foreign correspondent, Charlie D’Agata, stated that Ukraine “isn’t a place, with all due respect, like Iraq or Afghanistan, that has seen conflict raging for decades. This is a relatively civilized, relatively European – I have to choose those words carefully, too – city, one where you wouldn’t expect that, or hope that it’s going to happen”.

Then there is the BBC who interviewed a former deputy prosecutor general of Ukraine, who told the network: “It’s very emotional for me because I see European people with blue eyes and blond hair … being killed every day.” Rather than question or challenge the comment, the BBC host flatly replied, “I understand and respect the emotion.”

On France’s BFM TV, journalist Phillipe Corbé stated this about Ukraine: “We’re not talking here about Syrians fleeing the bombing of the Syrian regime backed by Putin. We’re talking about Europeans leaving in cars that look like ours to save their lives.” Lastly, an ITV journalist reporting from Poland said: “Now the unthinkable has happened to them. And this is not a developing, third world nation. This is Europe!”

Journalist and author Peter Oborne said, “We in the Western reporting fraternity need to examine ourselves, and ask what are our values? Do we actually have a single set of moral standards which we adhere to in all times and places? Because if we aren’t and we have one set of values for people inside Europe and one set of values for non-Europeans, non-white people we’re racists, we’re barbarians too.”

Therefore, the historical preference by Europe to protect European refugees during World War II, which was the backdrop for the 1951 Geneva Convention, couched in international, “universal” language, pledging for “everyone” to have the right to seek and enjoy in other countries asylum from persecution; the reality is that seeking asylum in Europe, America, Canada, Australia or New Zealand is preferentially given to white, European Christians.

“He who harms a person under covenant, or charged him more than he can, I will argue against him on the Day of Judgement.”

There are many examples from the history of the Khilafah that can demonstrate how the Islamic State provided sanctuary for refugees and protected them:

The generosity of the Uthmani Khilafah at the time of the Great Famine of Ireland in 1845 has become well documented [7]. In helping others the Khaleefah, Abdul Majid I, outlined the Islamic response with his words; “I am compelled by my religion to observe the laws of hospitality.” Muslims already have a long-established concept of selfless charity without any material gain (sadaqah). What is needed for our present time is for this mentality to be elevated and applied on a political, state level so that the millions of refugees in the world today can be cared for and allowed to settle in lands for their protection. In doing so, the Ummah is not only doing its duty to the rest of mankind but also showing the world the justice of Islam.