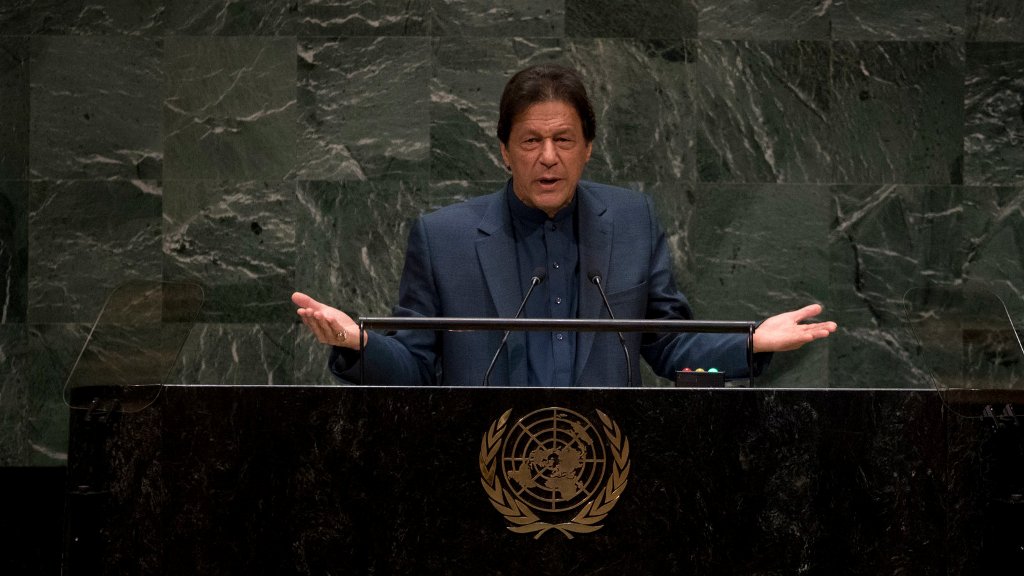 Dependence on the International Structures for Liberation of Kashmir, Despite Acknowledging their Failure, Establishes the Bajwa-Imran Regime’s Surrender of Occupied Kashmir

Pakistan’s Foreign Minister, Shah Mehmood Qureshi, elucidated the government’s four-pronged strategy over dealing with India on Monday, 17 August 2020, emphasizing that in a changing world, there would have to be a greater reliance on national strength, rather than looking towards international structures. He said, “This world is more uncertain, less predictable, and for these reasons, perhaps more dysfunctional.”

Now the bias of international structures is so evident that the regime is compelled to accept that there is a, “new world, brave or grave, this is upon us and with we have to contend,” in the words of its foreign minister. Thus, Pakistan’s rulers have finally, publicly conceded that the just resolution of Kashmir is not possible through dependence on the US, the UN, the international community and international law. It is not new news for the sincere and aware among the masses, influential and armed forces, who have all rejected dependence on international organizations and international law. The international structures have never delivered and will never deliver because they are dominated by major world powers that are enemies of Islam and Muslims, in general, and in the case of the US, specifically, their interests are aligned with those of India.

Despite stating the obvious, the government is toeing the policy of “restraint” against Indian aggression, banking on the UN and the international community to force India to allow a plebiscite in Kashmir. There is no fundamental change in the government’s policy towards Indian aggression. It is still not taking the necessary practical steps to secure the liberation of Occupied Kashmir. The announcement of the new four-prong strategy to confront India is nothing new. It is no more than the continuation of the old policy, but presented with a new cover. The four-prong strategy entails; confronting and exposing New Delhi’s intentions, deterring it through military preparedness, not being distracted by India’s actions and continuing with regional integration projects through participation in the CPEC, the Shanghai Cooperation Organisation (SCO), and the Economic Cooperation Organisation (ECO).

Successive governments in Pakistan have been using these four bent, blunt prongs for the last seventy-three years. Their failed strategy has only benefitted India, granting it time and space to strengthen its grip over Occupied Kashmir. Moreover, Pakistan has reduced its military vision to responding to Indian attacks on Azad (Liberated) Kashmir, instead of enhancing and expanding its vision to liberate Occupied Kashmir militarily. Similarly participating in regional integration projects benefits China greatly, extending the regional influence of a power that is evidently hostile to Islam, from its brutal treatment of Uighurs. Indeed, Muslims are losing all around through the current strategy.

The current strategy wastes the opportunity that has presented itself. India at this time is weak militarily, having to maintain two hostile fronts; Pakistan and China. India has a weak air force and air defense system, compared to Pakistan Air Force and Pakistan’s missile capabilities. In order to overcome these shortcomings, India is buying the Dassault Rafale multi-role fighter aircraft and the S-400 air defense system, whilst the current strategy is giving India the necessary space and time to do so. Before India arms itself to the teeth, the need of the hour is an offensive posture, mobilizing Pakistan’s armed forces across the Line of Control. However, the Bajwa-Imran regime will never take an offensive initiative, because of its blind loyalty to the US, who demands Pakistani restraint, so India can rise against China and the efforts for Islamic revival. Only the coming Khilafah (Caliphate) on the Method of Prophethood will adopt the necessary offensive posture, as the Khaleefah Rashid is bound to follow the command of Allah (swt) in His Speech, وَاقۡتُلُوۡهُمۡ حَيۡثُ ثَقِفۡتُمُوۡهُمۡ وَاَخۡرِجُوۡهُمۡ مِّنۡ حَيۡثُ اَخۡرَجُوۡكُمۡ “Kill them whenever you confront them and drive them out from where they drove you out.” [Surah al-Baqarah 2:191]