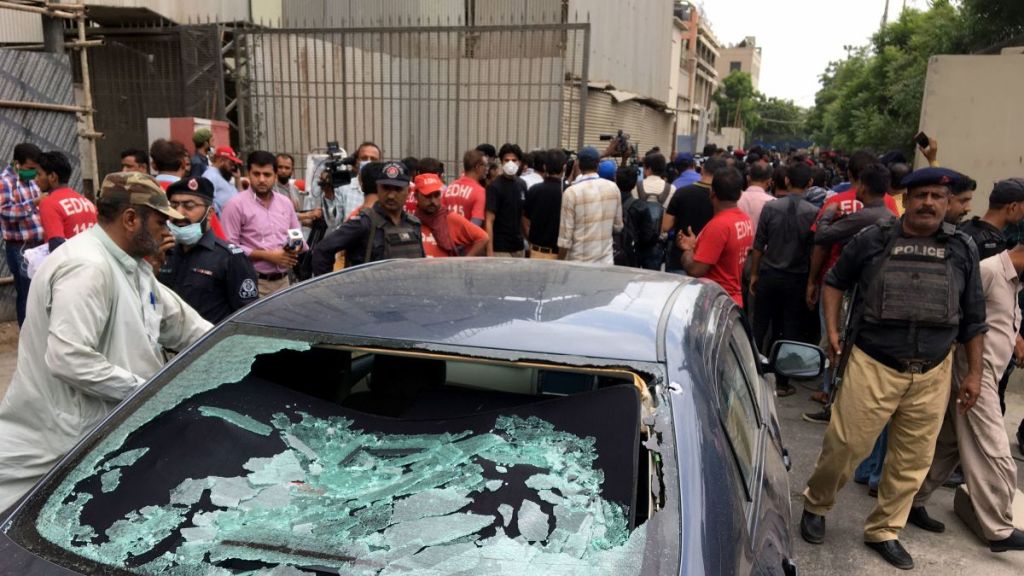 Whilst condemning the 29 June 2020 attack on Pakistan’s Stock Exchange, Pakistan’s Foreign Minister, Shah Mehmood Qureshi, accused India, whilst adding, “We will foil all Indian strategies [and] further expose it in front of the world.” However, the Bajwa-Imran regime’s strategy of exposing India has failed because the United Nation’s Security Council (UNSC) is blind to the brutal occupations of its favorites, the Hindu State and Jewish entity. Submitting to US demands to restrain Pakistan’s willing and able armed forces, the regime thus facilitates the rise of the Hindu State as the regional hegemon, whilst hiding behind appeals to the UN in order to deceive the Muslims of Pakistan and Occupied Kashmir over its criminal inaction.

The defeatist mindset of the Bajwa-Imran regime is evident from its constant appeals to the UNSC for help in resolving Pakistan’s national security issues. The five permanent members of the UNSC, if anything, can teach the Hindu State and Jewish entity lessons in crimes against Muslims and Islam. The United States has occupied Muslim Lands itself, whilst strengthening the occupations of the Hindu State and the Jewish entity at every opportunity, not least by restraining the Muslim armies through its agents that currently rule the Muslim World. Russia violated Afghanistan and Chechnya, before spilling the blood of Muslims in Syria in rivers, to secure the tyrant, Bashar al-Assad. China is undertaking a cultural genocide against millions of Uighur Muslims, whilst competing with the Hindu State over the spoils of the Muslim Lands of Occupied Kashmir. Britain has not abandoned its centuries of colonialist malice against the Muslims, actively participating in the destructive crusader projects wherever they arise, despite its diminished influence. France raped and slaughtered Muslims in its former colonies in Africa and now impoverishes them through economic colonialism, whilst leading a vicious campaign on Islam as a way of life as a proud standard bearer of liberal secularism.

The Bajwa-Imran regime’s strategy is to submit our national security to the authority of the colonialist Kuffar, who rival the Hindu State in active enmity against Islam and Muslims. Moreover, whilst commanding hundreds of thousands of Muslim troops that can easily defeat the cowardly and divided armed forces of the Hindu State in Occupied Kashmir, the Bajwa-Imran regime spreads fear of war itself to restrain them. Thus, the Bajwa-Imran regime presents inaction as a virtue, tying us down to suffer repeated strikes by the Hindu State, when we have the means to strike the snake dead. The criminal inaction of the Bajwa-Imran regime has made clear that the Khilafah alone will effectively prevent harm upon us at the hands of our enemies. RasulAllah ﷺ said, «إِنَّمَا الْإِمَامُ جُنَّةٌ يُقَاتَلُ مِنْ وَرَائِهِ وَيُتَّقَى بِهِ» “Indeed, the Khaleefah is a shield, from behind whom you fight and by whom you are protected.” [Muslim]. The Khilafah alone will deal with the active enemies of the Ummah on a war stance, tearing up alliances and normalization agreements with them. The Khilafah alone will undertake the practical work to unify the current Muslim states under its authority, to become the world’s largest state. So, let us all demand that the officers in our armed forces grant their Nussrah (Material Support) for the re-establishment of the Khilafah (Caliphate) on the Method of Prophethood, so that our enemies are finally forced into retreat. Thus, let those desiring martyrdom and victory grant their Nussrah now to Hizb ut Tahrir, under its Ameer, Sheikh Ata Bin Khalil Abu Al-Rashtah.