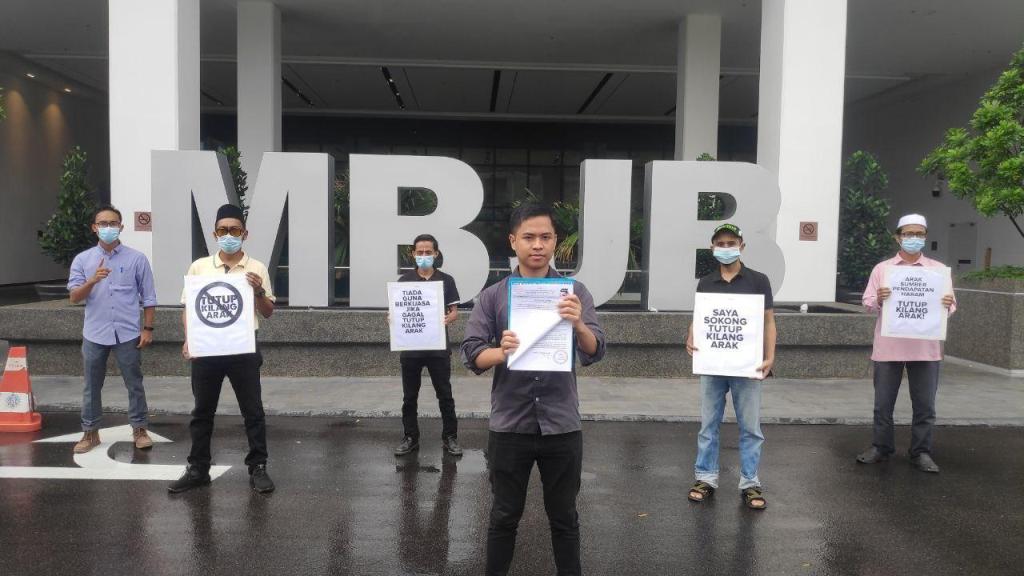 Why is the government taking so long in closing down breweries and stopping its sales license?

After conducting the “Close The Breweries” campaign for about two weeks, Hizb ut Tahrir / Malaysia (HTM) handed over an open memorandum to several Local Authorities (PBT) across Malaysia on the 18th of June 2020, urging that all breweries be closed, all liquor licenses be revoked and new licenses be withdrawn from all premises that sell liquor. In the memorandum, HTM also reminded the local authorities that alcohol is strictly forbidden in Islam and reminded them of the ten groups of people cursed by Rasulullah ﷺ in relation to alcohol.

In recent months, while the Movement Control Order (MCO) is still in force, Malaysia have been shocked by several serious and fatal accidents caused by drunk drivers. This has generated much reaction from the people. The mainstream and social media are filled with responses from various parties on this issue. Some want heavy penalties to be imposed on the offenders, some want the sale of liquor to be blocked and others want breweries in Malaysia to be closed. On the other hand, some say that the breweries and sale of alcohol cannot be abolished as its consumption is the right of non-Muslims and the government cannot deny it. Regardless of the views expressed, it is clear that the adverse effects of alcohol are the cause of this issue.

In Islam, alcohol is a forbidden substance and Allah (swt) has described the evils of alcohol to Muslims in His Words: يَا أَيُّهَا الَّذِينَ آمَنُواْ إِنَّمَا الْخَمْرُ وَالْمَيْسِرُ وَالأَنصَابُ وَالأَزْلاَمُ رِجْسٌ مِّنْ عَمَلِ الشَّيْطَانِ فَاجْتَنِبُوهُ لَعَلَّكُمْ تُفْلِحُونَ * إِنَّمَا يُرِيدُ الشَّيْطَانُ أَن يُوقِعَ بَيْنَكُمُ الْعَدَاوَةَ وَالْبَغْضَاء فِي الْخَمْرِ وَالْمَيْسِرِ وَيَصُدَّكُمْ عَن ذِكْرِ اللّهِ وَعَنِ الصَّلاَةِ فَهَلْ أَنتُم مُّنتَهُونَ “O you who believe! Intoxicants (all kinds of alcoholic drinks), gambling, Al-Ansab, and Al-Azlam (arrows for seeking luck or decision) are an abomination of Shaitan’s (Satan) handiwork. So avoid (strictly all) that (abomination) in order that you may be successful. Shaitan (Satan) wants only to excite enmity and hatred between you with intoxicants (alcoholic drinks) and gambling, and hinder you from the remembrance of Allah and from As-Salat (the prayer). So, will you not then abstain?” [Al-Ma’idah 90-91]

Without addressing the issue of alcohol in a broader context and maintaining focus solely on the consumption of alcoholic beverages, the damage arising from alcohol is as clear as daylight. Apart from the adverse effects of alcohol on human health, it also plays a major role in causing various kinds of damage to society. In the United States, more than 40% of criminals who are locked up in prison are related to crimes caused by alcohol. Alcohol is also the leading cause of sexual assault, domestic violence and various murder cases. In Malaysia, fatal accidents caused by drunk drivers increased tremendously this year, where the Malaysian Royal Police statistics reported that there have been 21 cases of accidents involving drunk drivers during the first five months of the year with eight deaths – a significant increase compared to 23 cases throughout the year in 2019. Looking back at the verses 90-91 of Surah al-Maidah above, after describing to the believers the evils of alcohol used by Satan to harm humankind, Allah (swt) raises a very important question – do you not want to stop drinking alcohol? Unfortunately, today, many Muslims refuse to free themselves from alcohol. Although not drinking alcohol, many are still willing to see alcohol sold everywhere. Although not consuming alcohol, many still consider it to be one of the sources of economic benefit and is the ‘right’ of the unbelievers, hence Muslims must not stop alcohol brewing and sales. This attitude is diametrically opposed to that of the Muslims during the time of Rasulullah ﷺ and his Companions (ra). When the news that alcohol is forbidden reached them they immediately removed the remaining alcohol in their hands and smashed the remaining containers without hesitation. The Companions of the Messenger of Allah (may peace be upon him) understand that Allah’s command must be followed without doubt and hesitation and they fully understood the Words of Allah (swt): وَأَطِيعُواْ اللّهَ وَأَطِيعُواْ الرَّسُولَ وَاحْذَرُواْ فَإِن تَوَلَّيْتُمْ فَاعْلَمُواْ أَنَّمَا عَلَى رَسُولِنَا الْبَلاَغُ الْمُبِينُ “And obey Allah and the Messenger, and beware (of even coming near to drinking or gambling or Al-Ansab, or Al-Azlam, etc.) and fear Allah. Then if you turn away, you should know that it is Our Messenger’s duty to convey (the Message) in the clearest way.” [Al-Ma’idah: 92].

Unfortunately today, there are still Muslims who adhere to the laws inherited from the West that allow the liquor industry and license to continue. It is most definitely an irony, even worse, a violation of the laws of Allah (swt) when human beings, especially the sweet talking government who accepts the fact that alcohol is haram and talks about its dangers but have no serious and strong intention to prevent this mother of all evil from destroying the society – by implementing the Islamic Shariah completely.

“Do not consume alcohol as it is the key to all that is evil.” (Ibn Majah)