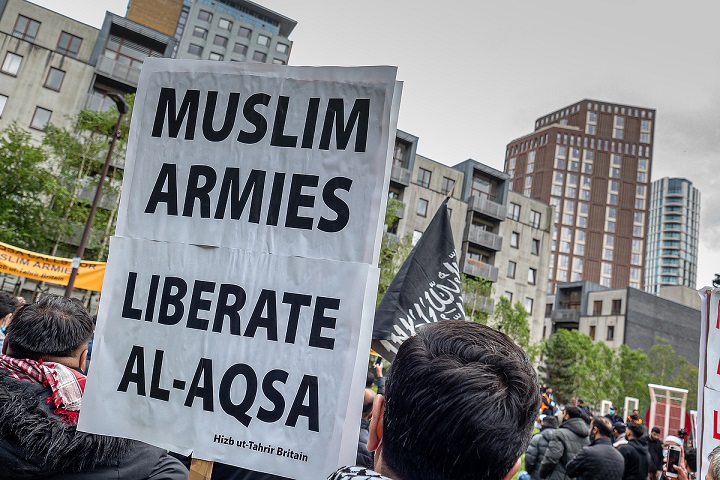 Hizb ut Tahrir in Britain demonstrated against the continued division and impotent reactions of the Muslim rulers. Hundreds in London and Birmingham came out in support of the dawah to re-establish the Khilafah (Caliphate) on the way of Prophethood, and to utilise the Muslim armed forces for the benefit of the Ummah, instead of the colonialists.

The crowds chanted Islamic reminders and condemnation of the passivity and betrayal of the rulers in Muslim lands. “Muslim rulers, they shake hands, with Zionists who steal our lands!” and “Muslim armies where are you? Al-Aqsa is calling you!” could be heard echoing down the busy streets of the country’s two largest cities.

Speakers at the demonstrations reminded the Muslims that al-Aqsa holds an eminent position in our Deen of Islam because of our Aqeedah and our history. It tests our Iman in the Qur’an and Sunnah, in our concepts of brotherhood, and in our reliance (tawakkul) upon Allah. The lives and wellbeing of the oppressed Muslims in Palestine have a sanctity afforded to them by the Shariah of Allah. The cries of the oppressed in al-Aqsa were repeated, calling upon the Muslim armies of the surrounding countries to heed their call and come to rescue them from the brutal occupying forces.

The speeches questioned the rulers and the leaders of the armed forces who do not respond to the oppression in Palestine, but only respond to aid the plans of the colonialists against Islam and the Islamic ummah. The attendees were encouraged to publicly question them about their loyalty to their national agendas and neglect of the agenda of Islam. Those who betray Allah and His Messenger should be warned of an impending doom, if they do not repent and support Islam instead of kufr (disbelief).

The Muslims were encouraged to exert their efforts for the project of Islam and the true Islamic solution for Palestine, while ignoring the distractions of those who go back to the colonialist governments, expecting anything other than humiliation and further entrenchment of the Zionist occupation of Palestine.

The Muslim youth were especially addressed with a reminder about the young age of the many heroes of Islamic history. Islam was strengthened with the youth who did not sit idle while there was oppression and Allah’s work was to be done.

Finally, the Muslims were reminded to have Tawakkul on Allah, and to encourage Tawakkul among the Muslims, such that we do not forget who our Mawla (Helper) is, while the enemies of the Muslims have no Mawla for their evil schemes.

“Before you We sent other Messengers to their people, and they too brought them the Clear Signs. We took revenge on those who did evil; and it is Our duty to help the believers.” [Ar-Rum: 47]