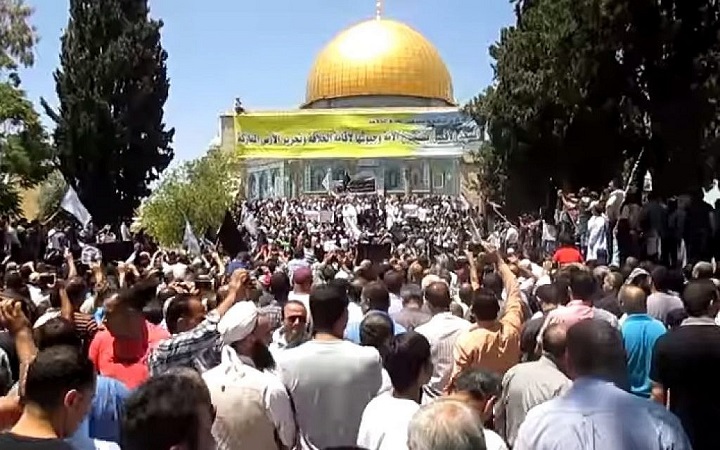 1. Liberation of Masjid al-Aqsa and the Blessed Lands of Palestine is an Islamic issue, not a Palestinian issue.

We are a single Ummah; and weakness is through our division on nationalist grounds. Allah (swt) said,

“And hold firmly to the rope of Allah and do not be divided. Remember Allah’s favor upon you when you were enemies, then He united your hearts, so you by His grace became brothers.” [Surah Aali Imran 3:103]. Al-Aqsa Masjid is not for the unarmed Muslims of Palestine to defend alone, but for the entire Islamic Ummah to liberate through the millions of willing and capable troops that it has been blessed with.

So do not raise the nationalist flag of Palestine in your protests, but raise the black banner and white flag of the Messenger of Allah (saw), the flag of the coming Khilafah, which is soon inshaaAllah.

2. Reject interference of the colonialist West and its tool, the UN.

The West supports occupation of Islamic Lands and prevents their liberation, whether in the case of Palestine, Kashmir or Afghanistan. Islam forbids our referring to any authority that judges by other than Islam, for it is a Taghut which must be rejected. Allah (swt) ordered,

“Have you not seen those who claim to have believed in what was revealed to you, [O Muḥammad], and what was revealed before you? They wish to refer legislation to ṭāghūt, while they were commanded to reject it; and Satan wishes to lead them far astray.” [Surah an-Nisaa 4:60]

So do not call upon the colonialists to arbitrate over Palestine, but demand the re-establishment of the Khilafah (Caliphate) on the Method of Prophethood as a guardian over our affairs.

3. Demand Mobilization of the Pakistan Army to liberate Masjid al Aqsa and all of Palestine

“Expel them out of the places from which they have driven you out. For persecution is far worse than killing.” [Surah al Baqarah 2:191]. Indeed persecution (fitnah) can only end under Islam and the Khilafah was a peaceful sanctuary for Muslims, Christians and Jews for centuries.