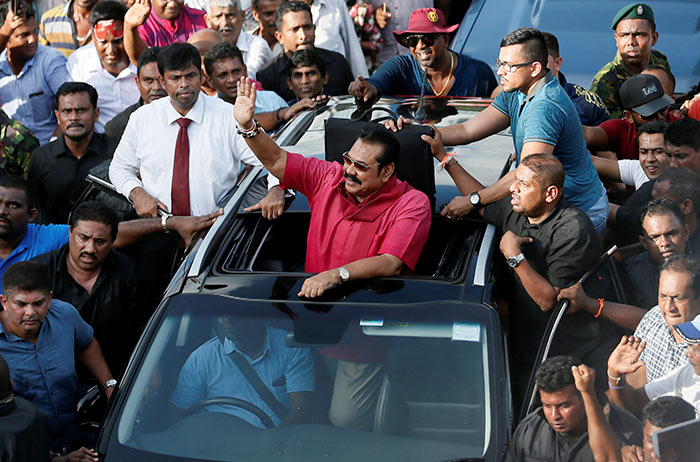 On Wednesday the 5th September, tens of thousands of opposition demonstrators in Sri Lanka, led by the country’s former president, Mahinda Rajapaksa, congregated in the capital to demand that the current government step down, accusing it of corruption, selling off national assets to foreign nations and causing economic hardship on the people, including through imposing increased taxes. President Sirisena’s government gained victory over Rajapaksa’s Sri Lanka Freedom Party in the country’s 2015 elections and was viewed at the time as an opportunity for a fresh start in the country and the path to provide good governance and economic growth. However, protestors claim that it failed to fulfill its promises. Rajapaksa’s fall from power was due in part to accusations of corruption against his family and party members including money laundering and misappropriation of state properties as well as various human rights abuses and inciting communal division. His government also managed to rake up a huge foreign debt during their nine years in power, due to taking foreign loans amounting to over 14 billion U.S. dollars. Despite all this, he managed to win a landslide victory in local elections earlier this year.

The political landscape of Sri Lanka, involving the to-and-froing of power between its political parties and leaders, while the economic and social woes of the people and poor state of public services remains unchanged or worsens, echoes the reality in democratic states across the world. It is a reflection of the ‘revolving door’ ‘see-saw’ politics of the democratic system where one party or ruler is voted into power upon grandiose pledges of bettering the lives of their people, only to be voted out or toppled a few years later due to dismally failing to deliver on promises or due to corruption charges. It is a repeated cycle that offers nothing but shattered hopes and dreams for the people. This is because, regardless of which political party gains the rule under the democratic system, no alternative sound model of how to solve the country’s political, economic and social problems is provided. Rather there is simply a re-hash and recycling of flawed capitalist or socialist economic and social laws and policies that have failed states the world over – east and west. This includes generating mass poverty and unemployment, gross inequality in wealth and social injustice. Under this failed man-made system, simply electing new (or rather re-cycled) leaders is like re-arranging the deck chairs on the Titanic while the ship is sinking. A political system that offers nothing but political De Ja Vue of broken promises, failure to deliver and a trial and error method of governing the affairs of people can never create a better future for any nation. Indeed, democracy is a simply a game where the people’s hopes are played upon by those vying for wealth and power, their aspirations exploited, and division fueled between communities and sectors of the society in order to win elections, while the suffering and financial hardship of ordinary citizens continues.

As a Muslim Ummah, when we witness the political shenanigans of democratic states across the world due to laws and systems made from the weak, flawed, biased, self-driven and limited minds of human beings, we should surely realize that this is a system that will never solve the mountain of political, economic and social problems that afflict our Muslim lands today – regardless of what hue of political party gains power. Indeed, Allah (swt) says, وَلَوِ اتَّبَعَ الْحَقُّ أَهْوَاءهُمْ لَفَسَدَتِ السَّمَاوَاتُ وَالْأَرْضُ وَمَن فِيهِنَّ بَلْ أَتَيْنَاهُم بِذِكْرِهِمْ فَهُمْ عَن ذِكْرِهِم مُّعْرِضُونَ “If the Truth had been in accord with their desires, truly the heavens and the earth, and all beings therein would have been in confusion and corruption! Nay, We have sent them their admonition, but they turn away from their admonition.” [23:71]

Rather, it is only returning to the System of the All-Knowing, the All-Aware, the All-Wise, Allah (swt) – the Khilafah (Caliphate) based upon the method of the Prophethood – that will deliver the brighter future that we desire for all corners of the Muslim world. This is a system that has a proven legacy of establishing a state where economic prosperity was generated which not only enriched the few, but where all benefited from the resources of its land, and where wealth was distributed fairly ensuring that the basic needs of all were met and empowering the masses to improve in their economic standard of living. Indeed, under the rule of Khalifah Umar bin Abdul Aziz, in the 8th CE, there was so much wealth in the Central Treasury, that even after his official in Iraq had used state funds to pay the people their dues, pay off their debts, give funds to those who needed it for marriage, there was still huge excess wealth remaining. So the Caliph told his official to look for everyone who owed the kharaj (the land tax) and lend him whatever was needed to help him cultivate his land. Indeed, he went further – ordering for state funds to be used to buy seeds and scatter it on mountain tops for the birds, so that even the birds would not go hungry in Muslim lands!

All this was due to the sound political and economic principles, laws and policies of Islamic rule emanating from the unlimited, flawless, perfect Knowledge of Allah (swt) – such as the prohibition of interest, the hoarding and monopolization of wealth, and the privatization of public resources; the implementation of a low taxation system; and obliging the correct payment, collection and distribution of Zakat. Indeed, He (swt) alone has the ability to define the best model to govern humanity to ensure justice, create prosperity and remove financial hardship.