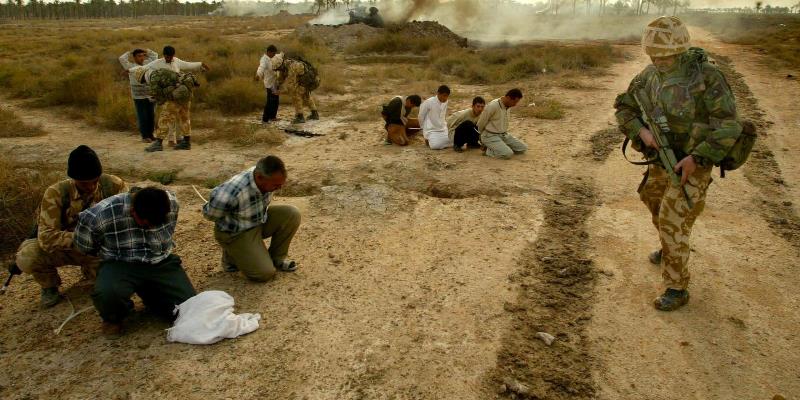 George W. Bush claimed that Saddam Hussein’s regime possessed weapons of mass destruction, posing a threat to world peace. This was his pretext to destroy Iraq and occupy it in 2003 in the “Operation Iraqi Freedom”. Despite numerous reports from international inspection teams, and the UN Security Council refusal to give a green light to attack Iraq, however, America, in its frenzied quest to control the world by the wild-west-cowboy policy to colonize the people and nations, did not pay attention to “niceties of International law”, nor to the global popular opposition that erupted against her plan to attack Iraq. When the US forces failed”, after the occupation, to find the alleged “weapons of mass destruction”, George Bush claimed that “the world is safer in the absence of Saddam Hussein”, and that America will make Iraq a model oasis of democracy and prosperity. This is the nature of every occupying aggressor. He gives false rosy promises of prosperity and the well-being of the occupied people, while his weapons are dripping blood, and its devastating warplanes rain its lethal missiles and bombs on people’s heads, while its companies plunder their wealth.

To cover up these crimes, America, through its representative, Paul Bremer, imposed a distorted constitution, which it claimed it would establish a democratic Iraq. To execute her agenda, America used a handful of Iraq’s power-hungry mobsters-politicians who compete among themselves to prove their allegiance to the American occupier, who in turn, gives them some crumbs from the “power cake” to compete for it with their gangs and henchmen. The oppressed people, meanwhile, have to be consumed by the fire of internal strife, and suffer the hellish conditions of living in the absence of the minimum elements for decent living standards, in a country that has been blessed by enormous economic resources and wealth, whether in oil, agriculture or water. Despite all this, after the false promise of consecutive governments have vanished, people were put off and refused to participate in the parliamentary elections last May (documented reports that the participation rate did not exceed 19% of the electorate), the cities and countryside exploded in anger to demand a decent life and to get rid of the corrupt political class.

Fifteen years after the American “democratic wedding” (which the Iranian regime took part in imposing), the so-called “Democracy Paradise” did not succeed in fooling the people. They discovered the corruption of the political class that entered Baghdad through American tanks, and discovered that the “democratic game” is nothing but mirage. At a time when people lack water, electricity and job opportunities, political blocs are grappling with the gains of power and have failed, four months after elections, to meet and to elect a president of the parliament, thus disrupting the political process to form the next Mafia-government.

Our people in the land of Iraq:

You have experienced the corruption of the rotten regime imposed by America, with Iran’s participation, and you saw clearly the hell of the so-called democracy, and the deception of the political class against you. We invite you to be ruled by the law of your Lord, and to cut off America’s influence and all its arms in Iraq, and liberate Iraq from its abomination and the abomination of its agents. Your dignity and glory is only by living in obedience to your Lord, who honored you with this great Deen and made you the best Ummah brought to humankind.

“Then is it the judgement of [the time of] ignorance they desire? But who is better than Allah in judgement for a people who are certain [in faith].” [Al-Ma’ida: 50]