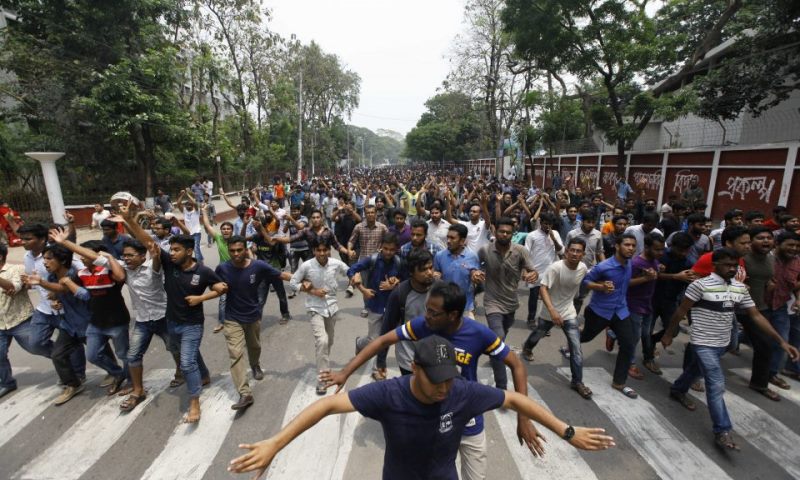 Lies, Deception and Persecution are the Real Policy of the Rulers under the Democratic System

Bangladesh is seeing mounting discontent across the country in the face of the nefarious acts of state-sponsored brutality to suppress the popular quota reform movement being organized by the job seekers and students of different universities and colleges. Last April, after seeing the surge in popularity of this movement amid severe police violence in the form of using tear gas, water cannons and baton charges on the protesters, the Awami League (AL) government played the appeasement game by falsely promising to accept their demands. But since then, the disgusting ‘Chanakya Niti’ (policy of deception) of the ruling party became apparent as it was doing nothing to implement the earlier promise, but rather came up with the wicked idea to help suppress the movement by using its student wing – the Chatra League. Thus, when the second wave of the protests started from June 30, 2018, Chatra League began acting with brutal force to dismantle all kinds of quota reform protests across the country. On the one hand, Chatra League, in front of police inaction, have been attacking and beating the protestors across the country so that they cannot gather in any place to initiate any movements; on the other hand, the police have been abducting and arresting all the key organizers of the movement – a phenomenal exhibition of secular totalitarianism and hegemony in the democratic system.

It is easily understandable why the AL government is so adamant against the quota reformation and taking a stance against the people before the looming election. They very well know that being a political party that is detached from people, they need to invest heavily in their muscle power, i.e. their political cadres, to hold onto power, and the existing quota system is indeed a great source of ‘dirty money’ for them, and a way to put their cadres in government positions. As of now, the AL government has issued around 250,000 documents certifying the bearers as freedom fighters where many of the certificates have been processed by the AL leaders through bribery and forgeries (“Making Merit”, The Economist, April 21, 2018). Then again, special public posts are being bought through the same party leaders by means of underhand dealings. Hence, the frustration of our youths is legitimate since a large 56% of BCS posts are being filled by political favouritism and patronage. This government came to power with the promise of giving a job to every family. Instead of doing something effective to stop the rapid increase in the number of educated unemployed, let alone creating 2 million new jobs every year as promised, this tyrannical regime has resorted to violence as they do not care about the aspirations of the Ummah.

O People: These types of lies, deception and persecution are the real policy of the rulers under the democratic system. The deception and persecution of the Hasina government regarding the quota is just an example of that. You have been witnessing these deceptions in the democratic system for decades, where the ruling class gets into power with false promises to the people and achieved sovereignty. Using this sovereign power, they serve the vested interest of the Imperialists, a few capitalist elites and themselves, and deprive the greater population from their rights. When the people come to the streets with demand for their rights, these rulers persecute the people with bullets and baton. In the very birthplaces of democracy, i.e. USA, Britain and European countries, mass protest amongst people and their persecution by the rulers are routine events. To sustain this democratic system, the rulers in the democratic world coin new slogans, such as: in USA `Make America Great Again’, in Britain `BREXIT’, in Bangladesh `Din bodoler pala (Time for Change)’, `Desh Bachao (Save the country)’, `Vision 2020’, `Vision 2030’, etc and appear with new faces. This democratic system has given birth to rulers, one after another, who are liars, deceivers and tyrants, but, we are beguiled by them again again! RasulAllah ﷺ says: «لَا يُلْدَغُ الْمُؤْمِنُ مِنْ جُحْرٍ وَاحِدٍ مَرَّتَيْنِ» “A believer should not be stung twice from the same hole.” [Al-Bukhari and Muslim].

It is this corrupted democratic system which has given birth to the discriminatory quota system. Because in this ruling system, by using the quota system the rulers sets up in the administration a crony group with vested interests, who are used to serve their corrupted political agenda and secure their power. These rulers, who are steeped in corruption and continuously usurp the rights of the people, use this crony group to suppress the rising anger and protests among the people. Like this discriminatory quota system, there are hundreds of other issues which are making your lives miserable. These rulers desire that your demands remain limited to these issues, such as: the anti-VAT movement, the demand for MPO inclusion by teachers, etc. and that you are never able to identify this man-made democratic system as the real problem. These issues are merely symptoms of the main problem, whereas the root of all your sufferings is this democratic system. So, keeping the democratic system in place, and exhausting all your efforts and energy on the numerous issues, including the quota system, will not solve anything. Rather put your all effort to remove this corrupted and repressive democratic system, and join the movement to re-establish the Khilafah (Caliphate), the only system of truth and justice revealed from Allah (swt).

O Muslims: The Khilafah will liberate the nation from the miserable situation they are under this repressive democratic system, and will look after the people’s affairs correctly and implement justice. RasulAllah ﷺ said: «الْإِمَامُ رَاعٍ وَمَسْئُولٌ عَنْ رَعِيَّتِهِ» “Imam (Khalifah) is guardian and he is responsible for his people.” In the Khilafah, the Khalifah (Caliph) takes the responsibility of the Ummah as an obligation (Fard) on his shoulder. So, he seeks Allah’s (swt) pleasure by taking care of people and at the same time he fears HIS (swt) punishment due to the negligence. In the Khilafah state, the Khalifah does not have the sovereignty of law-making and neither is he above the law. The basis of all laws is the Shariah. Additionally, the Khalifah will be accountable for his duties to the people, the media, the political parties, the representatives of the Ummah (Majlish Al-Ummah) and the Judicial Court regarding ruling (Mahqamat Al-Madhalim). The Khilafah will ensure that all of its citizens can fulfil their basic needs, such as, food, clothing, shelter, medical service and security, and help them achieve a prosperous life. Non-Muslims will have security and enjoy all citizen rights. The Khilafah will bring an end to the spiralling corruption and looting of people’s wealth, and ensure the proper distribution of wealth, and thus put an end to the economic discrimination amongst people.

To achieve the economic prosperity of the country, the imminent Khilafah will recover the public property such as, oil, gas and coal from the clutches of private and foreign ownership and use those for the benefit of the people. She will build an economy based on heavy and war industry, and as a result huge employment will be generated for the greater population as well as for the highly educated youths. The imminent second Khilafah Rashidah (Rightly-Guided Caliphate) will challenge the authority of the Kafir Imperialists and their regional allies, and for that she will require a large and powerful military force, and a pool of talented, efficient and capable civil admin officers. The Khilafah will train the small entrepreneur for free and provide capital for them without any interest; as a result a huge population will be self-sufficient. The Khilafah will not prepare you just for jobs, but rather she will prepare you to be capable to take the responsibility to achieve the leading nation status for this noble Ummah. Allah (swt) says: كُنْتُمْ خَيْرَ أُمَّةٍ أُخْرِجَتْ لِلنَّاسِ تَأْمُرُونَ بِالْمَعْرُوفِ وَتَنْهَوْنَ عَنِ الْمُنْكَرِ وَتُؤْمِنُونَ بِاللَّهِ “You are the best nation produced [as an example] for mankind. You enjoin what is right and forbid what is wrong and believe in Allah” [Aal-i-imraan: 110]

O Muslims: By coming out to the streets on various demands for your rights and by protesting, you have proved that you are not afraid of the anger of the tyrants. So, we, the Shabab of Hizb ut Tahrir, urge you not to confine yourself to protesting for the issues-based demands only, but rather come forward to join the movement to liberate yourselves and your people from the clutches of the democratic system. Do not confine yourselves by expressing your anger and frustration against the regime only in social media. To liberate the country from the AL-BNP regimes, join in the intellectual and political struggle to establish the Khilafah Rashidah under the leadership of Hizb ut Tahrir, and prepare yourselves as statesmen. We want to give you the glad tiding that, insh’Allah, the second Khilafah Rashidah is going to be established very soon, Insh’Allah.