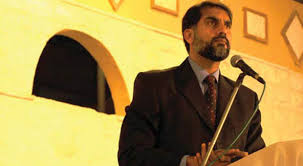 11 May 2019 marks seven years since Engineer Naveed Butt, the Official Spokesman of Hizb ut Tahrir in the Wilayah of Pakistan, was abducted by security officials, in front of his children and neighbors. In seven long years, Naveed has not been allowed to contact his family in anyway whatsoever, even once, whether by phone or in person. Certainly, abduction is persecution of the highest order, punishing the family along with the believer.

Certainly, it is a grave sin to ruthlessly persecute the believer who calls to Allah (swt) and His Messenger ﷺ. In a Hadeeth Qudsi, RasulAllah ﷺ said, «إِنَّ اللَّهَ قَالَ مَنْ عَادَى لِي وَلِيًّا فَقَدْ آذَنْتُهُ بِالْحَرْبِ» “Allah said, whoever harms my Wali I will declare a war against him” [Bukhari]. Yet, whilst claiming loyalty to the Madinah State, the current regime keeps Naveed in abduction until today, even though he worked tirelessly for the resumption of Islam as a way of life. Yet, whilst claiming that it is “independent” of the United States, the current regime keeps Naveed in abduction now, even though he bravely exposed the American plans against Muslims when he was free.

Yet, whilst claiming that it is mindful of the “national interest,” the current regime insists on keeping Naveed in abduction, even though this is only in the interest of the crusader United States and its terrorist intelligence and private military that operate freely in Pakistan to this day. Indeed, in the era of America’s global war on Muslims and Islam, there is mercy and clemency for the attacking enemy pilot of the Hindu State, Abhinandan, but cruelty and abduction is for the advocate of Khilafah, Naveed Butt. Indeed, it is a despised and oppressive regime that extends restraint and normalization to those who occupy Muslim Land, whilst deploying force and oppression against those sincerely working to establish the dominance of Islam.

RasulAllah ﷺ said, «إنَّ النَّاسَ إَذا رَأوُا الظَّالِمَ فَلمْ يَأْخُذُوا عَلى يَدَيْهِ أوْشَكَ أن يَعُمَّهُمُ اللَّهُ بعِقَاب» “If the people witness an oppressor and they do not take him by his hands (to prevent him) then they are close to Allah covering them all with punishment.” [Abu Dawud, Tirmidhi, ibn Majah]. The ongoing abduction of Naveed is a flagrant oppression amidst us, for which we will be held to account for by Allah (swt), so we cannot adopt silence. It is a duty for us to speak out against this crime, at every forum available to us, demanding Naveed’s immediate release. So, let all Muslims, especially those of power and influence, seek the mercy of Allah (swt) through a sincere and concerted effort to grant the honorable Naveed much deserved relief, after seven hard years. RasulAllah ﷺ said, «مَنْ نَفَّسَ عَنْ مُؤْمِنٍ كُرْبَةً مِنْ كُرَبِ اَلدُّنْيَا، نَفَّسَ اَللَّهُ عَنْهُ كُرْبَةً مِنْ كُرَبِ يَوْمِ اَلْقِيَامَةِ» “If anyone relieves a Muslim believer from one of the hardships of this worldly life, Allah will relieve him of one of the hardships of the Day of Resurrection” [Muslim].