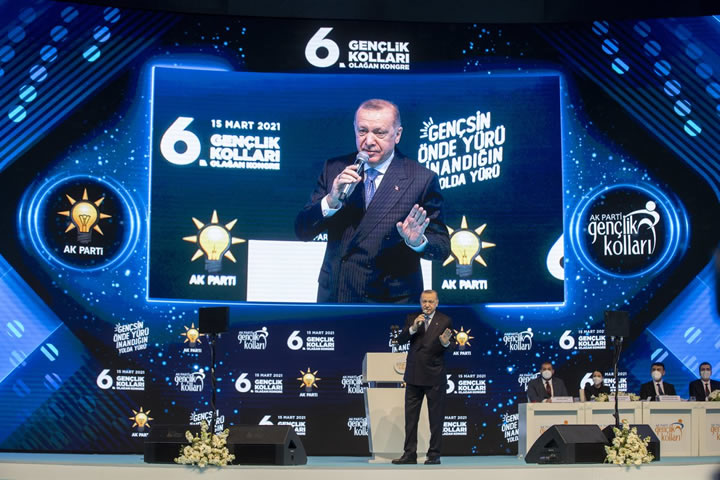 President Recep Tayyip Erdogan, who during AK Party’s 6th Ordinary Congress of Youth Branches uttered the fact that there are people who try to market their own marginal ideology, their deviant view and their way of life against nature under the mask of modernity, said that “There is no society in history that loses its religion, language, culture and values and can continue its existence. It is possible to resume these examples at length. The important thing is that you choose who to look up to in life.”. Erdogan emphasized that Prophet Muhammad is the greatest and most perfect role model. (Milliyet15.03.2021)

“How despicable it is in the sight of Allah that you say what you do not do.” [As-Saf 3]

Prophet Muhammad’s (saw) exemplariness is beyond dispute. However, it has to be known that this exemplariness exceeds the world of thought of Ruwaybidah by far, who try to become the apostles of democracy and work day and night to make it dominant in every sphere of life. What they want from the youth is an exemplariness regarding morals and worship.

President Erdogan’s inconsistencies in his speech, the fact that he mixes the truth with falsehood, mocks with people’s mind by reversing the realities, targets the path of evil to the youth and presents his inconsistencies as success, have become his usual behaviors.

How does secularism, democracy suit the nature that you are trying to implement these deviant thoughts in every sphere of life? While these thoughts are based on hostility to our religion, our values, why on earth are they blessed?

It is strange that Erdogan, who tells the youth about Prophet Muhammad’s (saw) exemplariness, Fatih Sultan Muhammad’s sacrifice, Selim I’s courage and Abdul Hamid II’s tenacity and exemplifies the struggles of these select personalities and these leaders who conquered continents for a single rule of the Sharia and didn’t fail to pay any price for protecting the honor and dignity of Muslims, and “Mustafa Kemal” who removed the staff which ensures the unity of Muslims, the rules of the Sharia, expects that such a youth will become the generation of Asim.

Even presenting the persons, who removed Islam from its application in life and implemented the thoughts of Western disbelievers against nature in the ruling, economic, education, judicial and social system, as exemplary figures to the youth, is an indication of the extent to which decay has reached. Isn’t this mentality that split the Ummah into pieces and made them turn on each other for a century. That which has depraved the family, generation and society and made immortality public with democracy under the name of freedoms instead of Allah Subhanahu Wa Ta’ala’s immaculate rules. Those who carry out an interest policy with the disbelievers in terms of Muslims’ bloods, lives and properties. What future are you talking about, Mr. Erdogan, when it is the secular democratic thoughts that you consecrate, but which trample on all our values!

Are you aware of how you waste the Islamic feelings of the people with your indecisive politics? For years, you called the Jewish entity as terrorist and said “normalization will not happen as long as I am in this position”. Despite the slaughter of ten of your citizens, you talked about the need for this entity in the time elapsed and about normalization without hesitation, and continued your relations. Just a few days ago, you mentioned normalization with Egypt, where Sisi, whom you called a coup plotter, is president. After all, interests are above all values for you…

What culture and value of this people will be safely carried into the future with the Istanbul Convention that has depraved the family, generation and society, laws based on the declaration of women, rights granted to deviant LGBT people? How are we going to carry our religion, our culture, our values into the future when democracy is the source of all these harams and crimes? How do we continue our existence away from the values that make us who we are?

Mr. Erdogan! Now that you are talking to the youth about patterning themselves on Prophet Muhammad (saw), then, if you are sincere, this exemplariness should appear in you first. You are both performing the apostleship of democracy and, without involving the Sharia in life brought by the Messenger, arresting sincere Muslims who struggle to make this Sharia dominant again. With these practices, you are carrying democracy into the future, not the values of the Muslim people.

This Ummah, of course, will guarantee its religion, values and culture, destroy the secular democratic orders, defeat the anti-Muslim infidels you have befriended, sustain the exemplariness of the Messenger in every sphere of life, fully implement the Sharia of Allah Subhanahu Wa Ta’ala, build peace and trust and establish the Khilafah (Caliphate) State. And this is very near In sha Allah.