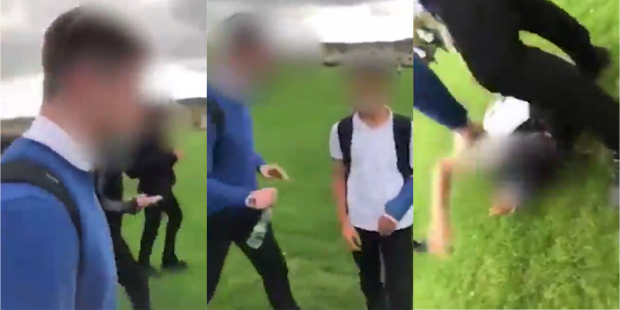 Last month a Syrian refugee boy was attacked in his school playground and his sister as well. The two incidents were filmed and spread across social media, showing the bully threatening to drown his victim. Now, a month on, the mainstream media are reporting the incident and police are only now reportedly charging the 16-year-old instigator.

Without the social media attention one has to question whether the mainstream media would have reported the incident, whether the school would have taken any serious action, or whether the police would have become involved at all?

Countless Muslims in Britain, young and old, can tell of the hatred that they have experienced firsthand. The parents of Muslim schoolchildren can tell them about the time when they were subjected to constant racial abuse and discrimination, primarily for their skin colour. In recent times, however, the racial element has given way to a hatred of Muslims and the Islam that they live by.

This kind of hate is the inevitable product of a secular society where the lowest common denominator is left to be the only bond between the people. The British government, their quangos and their mindless cheerleading media stooges have promoted suspicion about Muslims and Islam on a daily basis. The chief inspector for schools has been at the forefront of promoting intolerance for Muslims and Islamic values.

This new media attention on Muslim bullying, while it has been absent for countless daily victims, coincides with renewed calls upon the government to officially define the term Islamophobia, so that it can be dealt with effectively.

The Muslim community in Britain should be wary of government initiatives to steer the debate on Islamophobia, lest it be used as a tool to further secularise the Muslim community here. The underlying narrative is that Muslims are not secular enough, hence the attacks against them. The reality is that the increase in anti-Muslim and anti-Islamic rhetoric by politicians and the media has ideological underpinnings and is politically motivated.

Relying upon a secular state to define and prevent Islamophobia may bring some short-term gains, but will ultimately serve the secularisation agenda. The focus will be about preventing the attacks themselves, rather than debating the thoughts carried out by the attackers. It is treating the symptoms while ignoring the cause, even diverting attention away from the cause.

The secularists today are hopelessly incapable of defending their secular thought when faced with Islam, so they have promoted an anti-Muslim atmosphere to avoid any debate about their secularism. If Muslims focus on Islamophobia whenever attacks occur, whether crude insults or more sinister violence, it shuts down the debate about what is behind the attacks, making it easier for all to avoid discussion about secularism and Islam. It should not be avoiding debate about the justice of Islam and the corruption of secularism that produced Islamophobia. It should not be an objective for Muslims holding onto the Deen of the final Messenger (saw) to mankind.

Invoking Islamophobia diverts attention away from the real issues, while focusing on a few of the symptoms. Aqeedah and secular values are not robustly debated, as instead we are debating whether it is fair for a loudmouth or a bigot to be so abusive or not, especially as they claim to be living in an allegedly tolerant secular society.

Instead of focusing on Islamophobia, the unjust securitisation of Muslims by the government and media establishment should be called what it is, so that it is effectively exposed and debated.

Lies about Islam and Muslims should be exposed as lies, so that the hypocritical motivations of the liars are also exposed. The fallacious accusations and attitude towards Islamic beliefs and values should be exposed as a lack of reasoned thought, so that they become the object of thinking and can be corrected. This is the approach of the Qur’an which called the crimes of Quraysh out by name along with their criminal mentality.

The secular system itself should stand in the dock for the atrocious abuse and terrorising that Muslims face today, for it is incapable of bringing harmony to a society, as it cannot tolerate different beliefs and values. Far from Muslims being expected to further secularise their lives, we should further promote the Islamic dawah which aims to debate the secular beliefs and do not be afraid of genuine intellectual challenge.