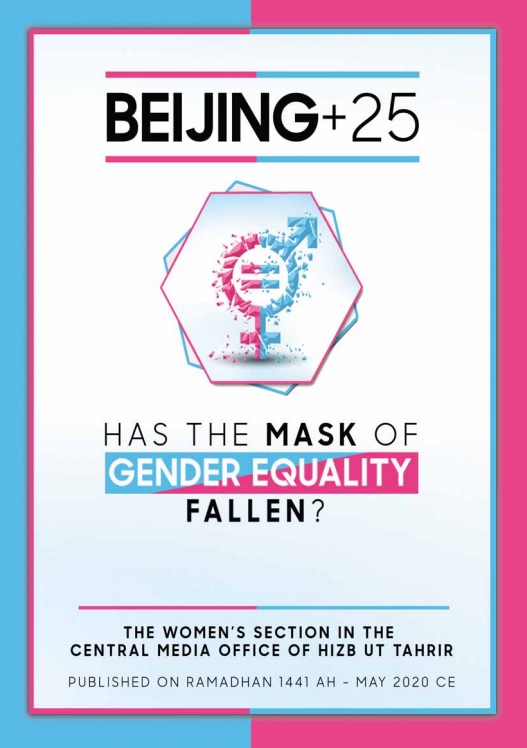 Download: Beijing+25: Has the Mask of Gender Equality Fallen?

On the 30th May 2020, the Women’s Section in the Central Media Office of Hizb ut Tahrir published a significant booklet entitled, “Beijing+25: Has the Mask of Gender Equality Fallen?” It is the outcome of a global campaign and international online conference organized in March and April this year to examine the narratives promoted by the United Nation’s (UN) 1995 Beijing Declaration and Platform for Action (BPfA), that the Western concept of ‘Gender Equality’ is the means to raise the status, advance the rights, and improve the quality of life of women internationally. The declaration enjoys its 25th anniversary this year and was hailed by the UN and governments worldwide as the most visionary agenda for the empowerment of women and girls internationally and the “most comprehensive global policy framework and blueprint for action” to realize ‘Gender Equality’ and the human rights of women and girls everywhere. The BPfA was adopted by 189 countries, including the majority of governments in the Muslim world, who agreed to implement its provisions and commitments within their states and promote its agenda and ideals amongst their nations. It also formed the basis of many subsequent international conventions and national acts and laws regarding women’s rights.

However, 25 years on from the BPfA, its promise of bringing empowerment and improvement to the lives of women through gender equality has not materialized for the masses of ordinary women world-wide, including in the Muslim lands. In fact, within many countries, the political, economic, social, educational, health care and environmental problems facing women and girls has worsened. This booklet therefore seeks to challenge the dominant narratives related to ‘Gender Equality’ and its claims of advancing women’s rights and wellbeing, and the progress of nations. It examines the reasons for the failure of gender equality policies and laws in improving the lives of women, as well as explaining the true ideological and systemic root causes of the multitude of problems facing women today. It also exposes the true agenda of the BPfA and other international women’s agreements with regards to the propagation of feminism and gender equality to the Muslim lands and to Muslim communities across the world. And importantly, the booklet aims to illustrate how Islam and its political system, the Khilafah (Caliphate) based upon the method of the Prophethood, provides a fresh approach and alternative time-tested sound and compelling vision to truly improve the lives of women and solve the many problems they face. It presents Islam’s unique comprehensive blueprint of detailed principles, laws and systems which raise the status of women within a society, secure their rights, protect them from harm, elevate their standard of living and achieve true progress within a state. The booklet is a compilation of articles by female members of the Central Media Office of Hizb ut Tahrir from different parts of the world and has been published in four languages: Arabic, English, Turkish and Indonesian.