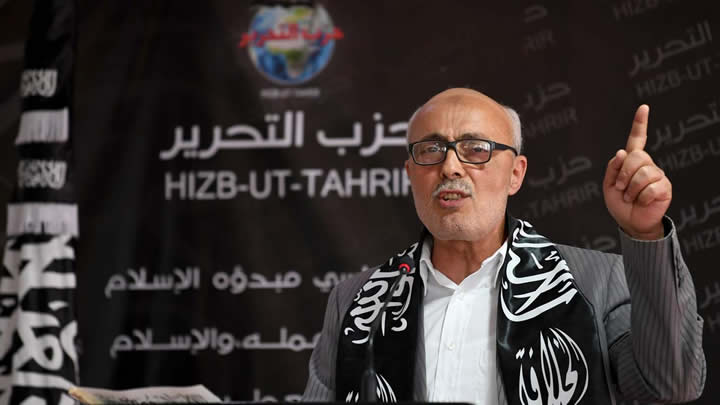 Three weeks ago on 01 Rajab 1442 13 corresponding to February 2021, Hizb ut Tahrir launched a global campaign entitled: “Upon the centenary of the destruction of the Khilafah… Establish it O Muslims” through which the entire Islamic Ummah, especially the people of strength and resilience, were aroused to establish the second Khilafah Rashidah (Rightly Guided Caliphate) upon the method of the Prophethood, during which the party carried out various events and great activities, in which the workers of Hizb ut Tahrir participated from the far East, Indonesia and Malaysia, to the far West, where the Atlantic Ocean and the Maghreb countries, and it left a great impact on the hearts of the Muslims.

Tunisia had a share in this campaign, as the workers of Hizb ut Tahrir mobilized in all the states of Tunisia by distributing and hanging flyers daily in the streets, markets and stations, and banners that include the campaign’s slogan were hung in strategic places in cities and dependencies. The workers of Hizb ut Tahrir held periodic protests, filled with powerful statements, to arouse everyone who has nobility, honor and a sense of helping others to work with the party to establish the Khilafah Rashidah, the source of the glory of Muslims and the pleasure of their Lord. The party also launched direct political seminars highlighting the importance of the Khilafah  in the lives of Muslims and the obligation upon the Ummah to play its role and duty in restoring Islam into power, and the social media sites witnessed overwhelming activities that affected everyone.

This campaign had a good effect on the people, which angered the politicians in Tunisia, so they mobilized their security apparatus to intimidate and harass the party’s workers, to the extent of beating, as witnessed in Sfax, and the municipal police removed banners from the public places despite the party following all the administrative procedures prior to hanging them; all in order to dissuade the party and its workers from continuing the campaign so that their voice does not reach the people.

On the first day of the campaign, the Media Office of Hizb ut Tahrir / Wilayah of Tunisia sent a statement to the media asking them to cover the party’s campaign so that they would have a share in establishing the Khilafah, and following that the statements about the arrests, security harassment and attacks against the party’s workers from the security forces throughout the campaign, but the media did not react to this call and ignored serious global efforts to save all humanity from the oppression of capitalism and man-made systems that caused misery to people and brought them into ruin!

In spite of this obfuscation, which is in harmony with all the regimes in the Islamic countries that are hostile to the project of the Khilafah, the campaign “Establish it, O Muslims!“ has achieved unrivalled success, and it has been heard from far and wide, and it will undoubtedly be a prelude to a great important matter that changes the course of history, when the da’wah joins with the supportive army and the Khilafah Rashidah upon the method of Prophethood is established to begin dealing with the major files, on top of which is the removal of the Sykes-Picot borders, the liberation of Palestine, and the utilisation of Muslim energies to bring about a colossal industrial revolution and a comprehensive renaissance that shines with the light of Islam, Allah (swt) says: