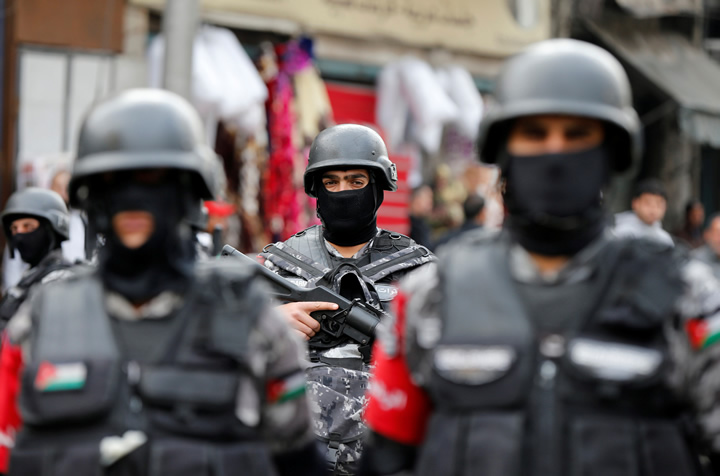 During the past few days, the regime’s security services in Jordan arrested a group of Hizb ut Tahrir workers in the cities of Irbid and Amman, namely Ustaath Hamza Muhammad Majali Bani Issa, Ustath Wael Abdel Karim Hafez Qubeia, and Ustath Muhammad al-Nadi and his two sons, for their participation in the global campaign in which Hizb ut Tahrir organized events in all the countries in which it operates under the slogan: “Upon the Centenary of the Destruction of the Khilafah… Establish it O Muslims.”

As for the details of the arrest, the Jordanian regime’s repressive apparatus on Monday, 1/3/2021, arrested Ustath Hamza Bani Issa from his workplace, and after interrogation with him, he was referred to the Public Prosecutor on the charge of distributing leaflets of Hizb ut Tahrir, then the director of Irbid governorate police referred him to the governor of Irbid who ordered his administrative detention last Wednesday and put him in prison. As for Mr. Wael Qubeia, the repressive forces exercised their habit of lying and fraud in order to arrest him, as they contacted him on the pretext of a problem related to his personal car, and after he went to the police station, he was arrested and a security force took him to search his house and took some books and then left the house. Since yesterday, nothing is known about them.

The continuation of the regime in Jordan and its repressive apparatus of preventive security and intelligence in the persecution of Hizb ut Tahrir and the suppression of its workers through arrest, torture, imprisonment, prosecutions, and narrowing their livelihoods since the establishment of the party definitely indicate the continuation of this regime and its security apparatus in their war against Islam, continuing the way of those who preceded them in their participation in the crime of the destruction of the Khilafah  and their cooperation with the Ummah’s enemies from the colonial disbelievers to continue the crime by working to prevent its return, and to abuse everyone who seeks to return it, not to mention its loyalty to the Ummah’s enemies and their instrument being the entity of the Jews, and how it is keen on their security, their protection, and the consecration of their state. Are those who share the system’s crime not ashamed, from Allah Almighty and his Messenger (saw) nor from the Muslims while they are suppressing the da’wah carriers to implement Islam that has been absent from life a century ago?!

We say to this regime and its followers: The arrest of the workers of Hizb ut Tahrir will not deter them from carrying out the duty and honour that Allah (swt) has honoured them with carrying, and they are steadfast by the grace and power of Allah like the anchored mountains, following the path of the Messenger of Allah (saw) in establishing the Khilafah Rashidah through the intellectual struggle and political struggle. No matter how barbaric and oppressive the regime reaches, and those who disagree with them will not harm them because it is an obligation from Allah Almighty and His obedience is a duty, and it is sufficient for this shameful regime to claim freedom of expression, while the word of truth uttered by a member of Hizb ut Tahrir shakes its corners and leads him to the State Security Court to be adjudicated punishments that Allah has sent no authority!

We in Hizb ut Tahrir are fully confident and believing in Allah‘s near victory upon the Ummah and the fulfillment of His promise to empower his religion, his state, and those working to establish it. Allah (swt) says:

“Those who oppose Allah and His Messenger (Muhammad) they will be among the lowest (most humiliated). Allah has decreed: “Verily, it is I and My Messengers who shall be the victorious.” Verily, Allah is All-Powerful, All-Mighty. [Surah Al-Mujadilah 20-21]