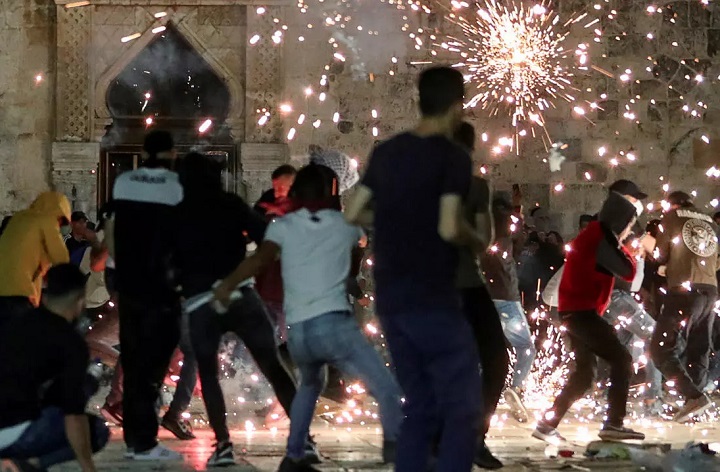 Comment:
More than 170 Palestinians have been injured after Israeli police stormed the Al-Aqsa Masjid and dispersed worshippers elsewhere in occupied East Jerusalem, as weeks-long tensions between Israel and the Palestinians over Jerusalem soared again as of May 10. Earlier in the day, tens of thousands of Palestinian worshippers packed into the masjid on the final Friday of Ramadan and many stayed on to protest in support of Palestinians facing eviction from their homes on ‘Israeli’-occupied land claimed by Jewish settlers. Despite bullets, stun grenades, sound grenades and arrests, over 90,000 Muslim worshippers have gathered on the evening for the 27th night of Ramadan at the Al-Aqsa Masjid. This makes us understand that, what a great and courageous Ummah are we, truly the best nation brought forth for humankind. We Muslims should understand and work for the real Islamic Solution for this issue, instead of us being circulated in the vicious cycle by relying of UN, relying on Muslim rulers etc. We relied on these fake Western Institutions and Muslims rulers for the past decades, but nothing changed. We Muslims need to wake up and understand what the real solution is.

The violation against Al Aqsa is a violation against Islam, a violation against 2 billion Muslims worldwide, against our first qibla, and against the site of Mi’raaj (ascension) of our noble blessed Rasool (saw). Just as this issue is an Islamic issue, its solution must also be an Islamic one. No more waiting on the puppet rulers in the Muslim world to move, they are the Zionist entity’s first line of defense and have been busy strengthening ties and paving the path for such violations to openly occur! No more calling for international colonialist intervention and no more calling for the colonialist UN Council reconvening. No more acceptance of a two state solution. No more echoing empty condemnations from politicians. No more lobbying Western politicians – the heirs of those who gifted the Zionist their cancerous entity to begin with! For have we not seen how much such efforts leads to nothing but more violations, more Zionist demolition and land acquisition and yet more subjugation and humiliation upon this very blessed and noble Ummah?! The Prophet (saw) said,

“The believer is not stung from the same hole twice.” [Sahih al Bukhari]

It is incumbent upon every Muslim to call for the removal of the treacherous and incompetent rulers from our lands.

Call for the armies to mobilize to liberate Palestine and all Muslim lands. Call for the Islamic Khilafah Rashidah (rightly guided Caliphate) as our means of governance. The Islamic solution is clear, the capable amongst our Muslim armies must mobilize and liberate Al-Aqsa from its colonial shackles! It is incumbent upon the descendants of Salahuddin al Ayyubi (rh), present armies of Muslim world to uproot the treacherous regimes which have protected the Zionist entity for decades and liberate Al-Aqsa under the banner of Islamic Khilafah once again.

Oh Armed Forces of the Muslim lands!! Make this Ramadhan, a month of victory as it was in the past by giving Nusrah to Hizb ut Tahrir for the re-establish the Islamic Khilafah, which will not only liberate Palestine, also all the other occupied lands and implement Islam and propagate it to the rest of the worlds.