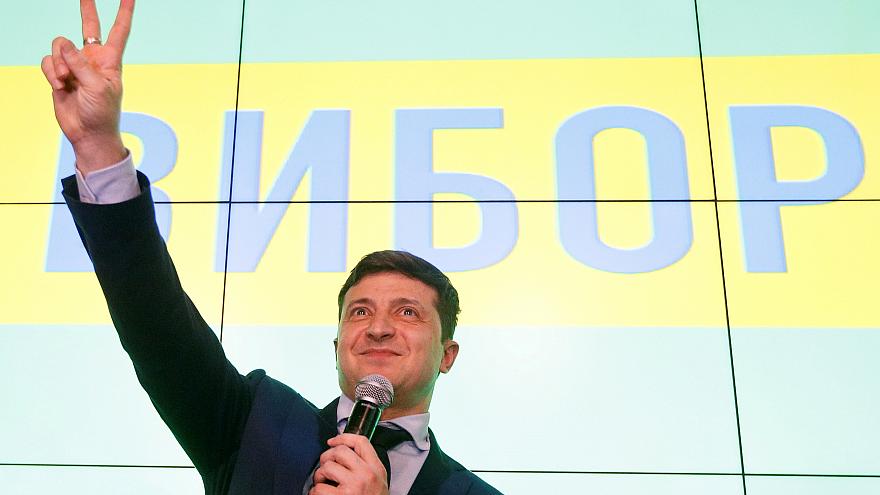 At April 27th 2019 elected president of Ukraine V. Zelenskiy made a statement about Russian initiative to issue Russian passports to Ukrainian citizens. His statement consisted from the following:

“…Ukraine is different from Russia, and particularly in the fact that we Ukrainians have freedom of speech and free media and internet. So we perfectly know what does Russian passport mean. It is right to be arrested for peaceful protest. It is right to have no free and competitive elections. It is right to forget about any natural rights and freedom…You should not speak with Ukraine and Ukrainians using threats and economical pressure. As for us, we are ready to discuss about new conditions of coexistence between Russia and Ukraine. It should be acknowledged that real normalization will be reached after full deoccupation of Donbass and Crimea. Ukraine will not surrender!…”

During the presidential race, actual President P. Poroshenko and his supporters built their strategy on an idea that his defeat will mean defeat in European course of Ukraine and its surrender in front of Russia. Poroshenko’s all main competitors, either Timoshenko or Zelenskiy, were blamed in assertion of Russian interests.

Though, according to results of second round which was held at April 21th, Zelenskiy succeeded shattering victory over Poroshenko with 73.22% votes against 24.45%.

Telling about obvious reasons of the very impressive victory of Zelenskiy, we should mention the followings:

When we examine deep reasons of sudden victory of Zelenskiy, we should mention that the current presidential race was under power of trends that are spread in many European countries and even the USA for last years.

Trump’s victory in US, Brexit in Great Britain, rise of populist parties in Germany, Bulgaria, Poland, Czech Republic, Hungary, Italy, Slovenia and other European countries, obviously show that West is ill with populism.

According to a research initiated by The Guardian over 25% European people support populist parties.

The main criterion to identify populism is the support of set of ideas about separation of society to two competing parts: pure people and corrupt elite.

Exactly this is the core idea of “People’s Servant” serial and Zelenskiy’s electioneering.

Such trends in Western countries indicate about ideological decline in these societies, when people do not support concrete ideas, programmes or reforms and as a result traditional parties, but support new faces, which supply simple but frequently unachievable ideas about “struggle with eternal inequality and corrupted elites”

The impact of populism on current presidential elections in Ukraine was more fatal since the lack of ideological political parties and effective continuity of power mechanisms. In that sense Ukraine confirmed its devotion to European values and trends.

It is worse to mention that modern media and social networks play important role in spreading populist sentiments. Media-platforms for decades served to ruling elites and traditional parties to control societies for their own interests, including, for instance, spreading of islamophobia and so-called Islamic threat, that justified economical and military intervention in Islamic world. But now these platforms became main populist’s weapon against ruling elites. Therefore, sorcery turn against the sorcerer.

When discussing about course of Ukraine under Zelenskiy’s presidency it is worse to mention that Russia will face the same disappointment as in the moment when Trump was elected. Russia expected warming in relations with US, but these expectations were broken in first months when Trump came to power.

Charging Zelenskiy with being Russia’s proxy was main idea of Poroshenko’s electioneering. This was aided by Zelenskiy’s silence about future relations between Russia and Ukraine.

As for Russia, it was taught with open support of Trump during his electioneering and since was very careful in valuation of Zelenskiy. Though some support was seen on pro-government TV channels and in words of fugitive Ukrainian politics such as former Ukrainian prime-minister N. Azarov.

But changes in Zelenskiy’s rhetoric’s after first round and statements made by him after second round show that his policy in that issue will not differ much from Poroshenko’s.

Exactly therefore Putin’s herald in Ukrainian crisis V. Medvedchuk stated after the second round that Zelenskiy does not agree with Russia’s conditions in settlement at East of Ukraine.

And at last at April 27th elected President Zelenskiy made a statement about Russian initiative to supply Ukrainian citizens with Russian passport.

Someone may say that Zelemskiy tries to lull the vigilance of the Ukrainian people. But in fact it was not so important who will win the elections; any winner has no alternative in continuing the policy of previous president. Since everyone including Zelenskiy and forces behind him know what was the result of friendship between Yanukovich and Russia. Today society and political forces will not tolerate any turn to Russia.

It should be known that if Zelenskiy will negotiate and compromise with Russia it will not be the result of his will or will of forces behind him, but it will be the will of West, particularly US. In that sense Ukraine, it’s people and resources are hostages of struggle between US and America.

This is the most probable scenario about situation in Ukraine after the new president was elected, and the coming months will confirm this or disclaim it.

In the end, returning to the populism problem, it should be said that today we witness an ideological weakening of Europe and even the US. This creates favourable conditions for the Islamic Ummah that desires to return to the world arena as an influential and even leading state.