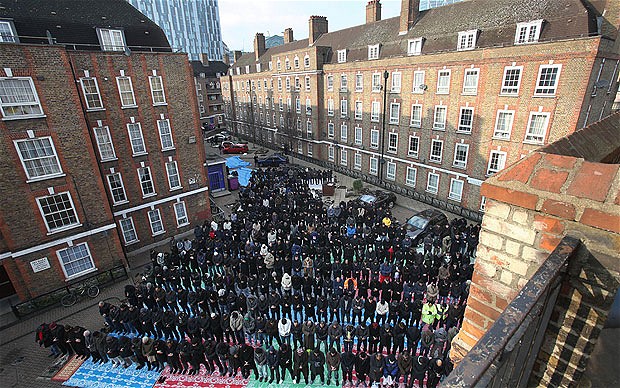 When a person believes that his civilisation has reached the peak of what humanity can ever achieve, he is not looking for an alternative. No matter how awful life is, he will either fall into deep depression at his miserable existence, or make up excuses for his dire situation, imagining that things will get better somehow on their own. This is the reality of life for most ordinary people in the West.

Youth murder is now at an all-time high on British streets, so the media and politicians are currently discussing the crises and how to deal with it. Only the fatalities get reported, while there are hundreds of attempted murders for every tragic death. For a great many children, knife and gun crime are just normal facts of life, as they all know a victim.

A spotlight has been shone onto the gangster youth culture and the desperate fear for their lives that young people live in. Carrying a knife for protection at age eleven becomes a dangerous habit by their late teens. Criminal gangs do use extreme violence to grow or defend their territory, which begs the question: why are they so many gangs? However, there are also groups of children creating gangs among themselves for protection against the other gangs, which then itself leads to gang rivalry, gang culture, and more violence. Even childish disputes on social media or perceived disrespect can lead to friends and friends of friends getting embroiled in revenge killings and attacks.

The politicians are currently bickering over police numbers and budgets, as though the whole solution lies in the police gang imposing its will on the other gangs. This is tribalism at its worst.

What no one is willing to discuss is the ideological culture that is the fertile soil for all violent, criminal and gangster culture. The government particularly want to avoid that discussion, due to their complete entrenchment in the global gangsterism that is capitalism’s colonial hegemony over the world. The affluent middle classes do not like to think of their own values as being responsible for the murderous culture of dictators overseas, nor that of the gangsters in deprived areas of their own cities. Having believed the lie that their own secular ideology is the best that humankind can have, there is no willingness to examine its role in this deplorable state of affairs. No one can see a viable alternative, so it is assumed that none can exist. The best anyone can hope for is that the violence remains isolated to a few poor neighborhoods, and won’t cross over to directly affect the wealthier ones. This naive hope was shattered years ago with victims of youth violence now in every area and school, yet some still bury their heads in the sand.

With such desperation the lowest of human thinking rises to the surface. All forms of racist, nationalist, xenophobic, or anti-Muslim blaming comes to the fore, gaining in popularity even among those who thought themselves as humanitarian and endowed with a higher thinking. This in turn leads to new tribalistic gangs emerging to target the minority group who is alleged to be responsible for the violence. Instead of taking collective responsibility for the individualistic, selfish, and divisive values which are the true underlying cause of the continued increase in criminality and gang culture, blaming others is often an easier pill to swallow.

A Muslim convert friend of mine was recently attacked in a busy shopping mall. His eyes met with a stranger, so he thought of the Sunnah of the Prophet ﷺ that a smile is charity, so he smiled at him. The man attacked my friend and threatened to stab him there in front of his children, for giving him a “funny look.” When the police came they detained my friend because he had black skin (unknown to them he is a senior manager in a government department), despite the many witnesses who confirmed that the other man was the aggressor.

The government in Britain wanted to appease the xenophobic atmosphere of blaming foreigners, so they started targeting migrant students, in order to fool the people that they were reducing immigration overall. The irony is that this group of migrants nearly all return home after completing their studies. I spoke to a number of Muslim students who expressed their disappointment at the low quality of life in Britain, after having heard such fantasies before their arrival about the wonderful life in the West. They could not wait to return home, as Britain was not a place they could ever consider for raising their family.

This situation is not new to the West. For decades the British people looked at American violent crime levels in horror, knowing that in a decade or so such violence would come to them too, just as it has come to the rest of Europe. Running to the suburbs and then to the countryside is no solution, as after a while it follows them there too.

Fourteen hundred years ago, the Arabian Peninsula knew the human cost of such a tribalistic culture. Yathrib had lost many of its leaders and sons to pointless wars and rivalries, sparked by so small as a dispute over a camel. When the Prophet ﷺ came to them he showed them a new ideology and a new culture to replace their base tribalistic and selfish culture. He established a State that brought people together as brothers, rather than leaving them divided to go war over the most trivial of matters.

When I have travelled in the Muslim countries and told people about the reality of life in the West people are usually shocked, as this is not the same image that the media likes to portray. The next response is “Yahya, you have a lot of work to do to show the people there about Islam, to being them out of their miserable darkness.” I don’t disagree that we have a lot of dawah work to do, but then I have to say that the responsibility is not all on me. Muslims in Britain do regularly talk to the people, but the common response is: “Where is Islam then?!!” They cannot see Islam in practice, so they cannot imagine it as an alternative. They have had a lifetime of being told that their secular Capitalism and liberal values are the best humanity can achieve. They will quickly point at Saudi Arabia, Egypt, Pakistan, Iraq, or Syria, and ask “is that the alternative that you are inviting me to?” Here I have to remind the Muslims outside of the West that you also have a heavy burden of dawah and a most important role to play.

Without a true Islamic State in the world, the Khilafah (Caliphate) on the way of Prophethood, no one in the West is listening. No one can see the shining example of justice and humanity, to guide humankind out of the darkness into light. No one bear witness to the true guidance of Islam, implemented as a state and a system, which elevates the lives of the people, removing the rotten fruits of false ideologies.

Truly, for the past 97 years, since the British agent Mustafa Kemal abolished the Ottoman Khilafah on 28th Rajab 1342 Hijri, the world has not taken Islam seriously, as there has been no practical example for them to turn to. Today, as nearly a century has passed without Islam, it is time for the Muslims over the whole world to recognise that no dawah effort can bear fruit without the full implementation of Islam for the people to look at. We cannot guide mankind out of darkness into light without a beacon to show them the way. The outlook for humanity will continue to be narrowed until we are able to return Islam to ruling, so that we may be witnesses over mankind again.

“And thus we have made you a just community that you will be witnesses over the people and the Messenger will be a witness over you.”