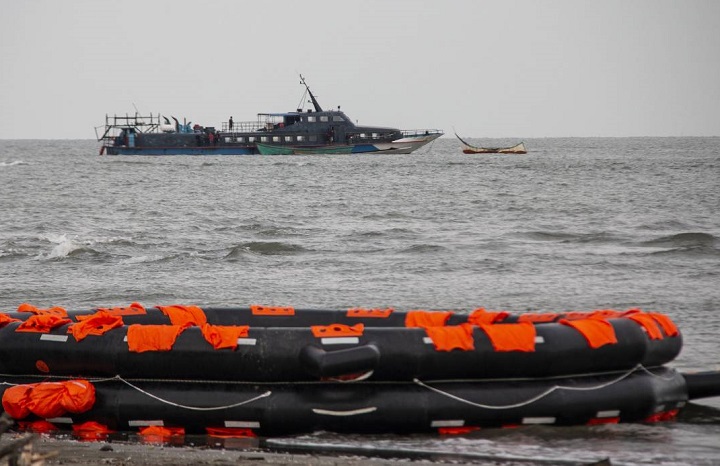 On the 4th of June, a boat containing 81 Rohingya refugees, including 49 women and 11 children washed up on the shores of Idaman Island, off the coast of the Aceh Province of Indonesia, after drifting for more than 100 days at sea. Nine died aboard the boat during its hazardous journey. These desperate Rohingya Muslims had left the overcrowded, squalid and disease-ridden refugee camps in Bangladesh in search of a better life in a neighbouring country.However, they were refused entry into India, Malaysia, and re-entry into Bangladesh. After arriving on the Indonesian island, it is also reported that local police urged the refugees to return to their boat and leave Indonesian waters, but they refused. They now await the decision from the Indonesian authorities to decide their fate as to whether they can remain or will be driven back to sea. Even if given permission to enter the country, they will not be permitted to work or to settle permanently according to the inhumane nationalistic policies and laws implemented by the Indonesian regime.

Comment:
Meanwhile, on the 1st June, Rohingya Muslims on the desolate Bhasar Char Island to which they had been shifted from the Cox’s Bazar refugee camp by the Bangladesh regime, were beaten by Bangladesh police as they tried to protest against their appalling living conditions to UN officials visiting the settlement. The UN Refugee Agency said in a statement that it had received reports of injuries during the event, including of women and children. Bhasar Char is a cyclone and flood prone silt island in the Bay of Bengal where its Rohingya refugee residents live under prison-like conditions with access to only basic food staples which does not include vegetables, meat or fish, and with no access to work or facilities such as proper schools and heath care provision. Bangladesh authorities have already moved 18,000 Rohingya to the island from its mainland refugee camps, out of a planned 100,000, with promises that they would be able to work, farm and fish in their new location which transpired to be an utter lie. The scale of its atrocious conditions can be appreciated by the fact that residents of the island have described the cramped and squalid state of the Cox Bazar refugee camp in mainland Bangladesh, home to around 1 million Rohingya refugees, as being a thousand times better than Bhasan Char. Many refugees have been arrested and beaten for trying to leave the island, including women and children, and there have also been reports of torture and abuse at the hands of Bangladesh forces on the island. According to Human Rights Watch, children have been punished for just moving out of their designated areas. In April this year for example, it was reported that a Bangladesh sailor beat 4 Rohingya children with a plastic pipe for leaving their quarters to play with refugee children in another area.

The suffering, misery, and desperation of the Rohingya Muslims is relentless. Not only have they been designated as stateless having been refused citizenship in Myanmar, a land that they and their families have been living for generations, but there is no land today where they can enjoy a decent protected life; no land which is willing to offer them dignified sanctuary; no land where they can call home. These are Muslims who have already suffered the most horrific unspeakable crimes as victims of a genocide – what the UN termed as a “textbook example of ethnic cleansing”. Yet, instead of welcoming them as their Muslim brothers and sisters and offering them a safe place to live and prosper as Allah (swt) commands, these conscienceless Muslim regimes, intoxicated by their inhumane un-Islamic and Western nationalistic ideals and system, view them as a burden to their economy and chase these desperate Rohingya Muslims from their shores, place them in death-trap camps, or deny them basic rights, despite the fact that the Prophet (saw) said clearly:

«الْمُسْلِمُ أَخُو الْمُسْلِمِ لَا يَظْلِمُهُ وَلَا يَخْذُلُهُ» “A Muslim is the brother of a Muslim: he does not oppress him, nor does he abandon him”.

Today, in the absence of the System of Allah (swt) – the Khilafah (Caliphate) based upon the method of the Prophethood, the guardian and shield of the Believers, the Rohingya Muslims as well as other Muslims fleeing genocides and persecution, as in Syria and East Turkestan, face the prospect of living permanent miserable lives under the banner of ‘refugee status’, rejected by the lands in which they seek sanctuary, and with no real home where they can feel cared for and safe and secure. In contrast, the Khilafah is a state which shuns and rejects nationalism, for the Prophet (saw) said:

“Whoever calls to Assabiyah (tribalism and Nationalism), fights for Assabiyah or dies following the way of Assabiyah is not one of us.” Instead, it will provide equal citizenship rights to those who wish to live under its rule – regardless of religious belief, race or ethnicity, as Islam obliges – welcoming those who seek asylum within its lands, punishing those who mistreat them, and unifying and creating harmony between the different peoples within its society through its Islamic domestic policy which is the epitome of humanity. This is why it is unsurprising that British writer H. G. Wells wrote regarding the Khilafah: “They established great traditions of just tolerance. They inspire people with a spirit of generosity and tolerance, and are humanitarian and practical. They created a humane community in which it was rare to see cruelty and social injustice, unlike any community that came before it.” Having understood all this, isn’t the establishment of this state the urgent need of our time?