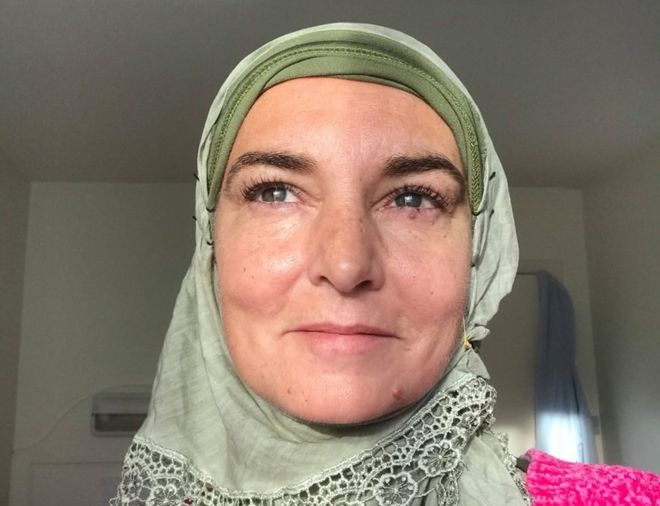 Irish singer Sinead O’Connor has announced her conversion to Islam, changing her name to Shuhada’ Davitt. “This is to announce that I am proud to have become a Muslim,” she wrote on Twitter on October 19. “This is the natural conclusion of any intelligent theologian’s journey. All scripture study leads to Islam. Which makes all other scriptures redundant.” The singer added: “I will be given (another) new name. It will be Shuhada’.” She spells her new name, which means “martyrs” in Arabic, with an apostrophe at the end.The 51-year-old has tweeted that she is “very, very happy,” and apologized for mispronouncing some Arabic words during her recitation of the Azan. Although her embrace of Islam attracted criticism and anti-Islamic remarks, it was broadly welcomed by fellow Muslims online. “Salaam (a greeting that means “peace”) and keep up the good work,” said Immy Khan. “You have 1.7 billion brothers and sisters now.” On Thursday Davitt tweeted: “Thank you so much to all my Muslim brothers and sisters who have been so kind as to welcome me to Ummah (the Muslim community) today on this page. You can’t begin to imagine how much your tenderness means to me.” The singer formally known as O’Connor made headlines in 1992 when she ripped up a picture of Pope John Paul II during an appearance on a US television show. Later she said in an interview with TIME that she was prompted to do so by the Catholic Church’s record of child abuse. She was then ordained a priest by a bishop of the fringe Catholic Latin Tridentine Church in Lourdes, France, in 1999, in which she was renamed Mother Bernadette Mary, according to the Irish Independent. The Catholic Church dismissed the ordination of the singer at the time as “bizarre and absurd.” In 2011, she again criticized the Catholic Church over the child sex abuse scandal, in an article for the Sunday Independent.  She dubbed the Vatican “a nest of devils,” calling for the creation of an “alternative church’,” and lamenting that “Christ is being murdered by liars” in the Vatican. Pope Francis spoke during his visit to Ireland earlier this year of his shame over the “appalling crimes” of historic child abuse in the Catholic Church and said outrage was justified. [Source: CNN]

“Say: ‘O you mankind! Now truth (i.e. the Quran and the Prophet Muhammad), has come to you from your Lord. So whosoever receives guidance, he does so for the good of his own self; and whosoever goes astray, he does so to his own loss; and I am not (set) over you as a Wakeel (disposer of affairs to oblige you for guidance).’”

Speaking to The Independent in his first interview with foreign media since he came to power two months ago, Mr Khan seeks to explain why he is making the visit. “What happened in Turkey is just shocking, what can I say? It’s shocked all of us,” he says. “But that aside, the reason I have to take this opportunity is because we are a country of 210 million people and we have the worst debt crisis in our history.” “We are desperate for money,” Mr Khan adds. “Unless we get loans from friendly countries of IMF, we actually won’t have foreign exchange to either service our debts or to pay for our imports, so unless we get loans, or investment from abroad, we’ll have real, real problems.”  At the Davos in the Desert conference Pakistan’s government says Saudi Arabia has agreed to give Islamabad $3 billion in foreign currency support for a year, as well as a $3 billion loan in deferred oil import payments, to help ease Pakistan’s economic crisis. The $6 billion rescue package exceeds forecasts by analysts and is expected to reduce the size of any bailout from the International Monetary Fund (IMF) that Pakistan is currently negotiating. The Saudi offer came as Pakistani Prime Minister Imran Khan attended an investment conference in Saudi Arabia that has been boycotted by other leaders over the killing of a dissident Saudi journalist at the country’s consulate in Istanbul. Pakistan’s Foreign Ministry on October 23 said Khan’s current visit was successful. “It was agreed Saudi Arabia will place a deposit of $3 billion for a period of one year as balance of payment support,” the ministry said in a statement. “It was also agreed that a one-year deferred payment facility for import of oil, up to $3 billion, will be provided by Saudi Arabia,” the ministry said. “This arrangement will be in place for three years, which will be reviewed thereafter.” [Source: Independent

Khan’s government is only a few months old and in that time Khan has done several u-turns. Sometimes Khan is keen to engage with the IMF and other time he takes his begging bowl to Saudi Arabia and China. It is obvious Khan has no economic plans and is struggling to put together a coherent economic policy.

Muslims in India have criticized the Supreme Court’s refusal on Thursday to revisit its 1994 ruling that said mosques are not essential to Islam.  Dr. Mohammad Manzoor Alam, chairman of the New Delhi-based Institute of Objective Studies, said the court had ignored abundant Islamic literature on the necessity of mosques in Islam. “Hindu religious extremists may use this verdict as a ruse to trouble us in the future,” he told Arab News.  New Delhi-based academic Dr. Anwar Sadat said mosques are “where we understand religion and its interpretation. It’s a place where we form associations. The court hasn’t done justice to us.” Thursday’s ruling paves the way for determining ownership of the disputed Babri mosque site in Ayodhya, a town in the eastern Indian state of Uttar Pradesh. Ayodhya’s mostly Hindu population believe that their supreme deity Ram was born at the site. They wish to build a huge temple there, but the Muslim community opposes this.  The court has set Oct. 29 as the start date for the hearing on ownership of the site. “The court has refused to examine whether essentiality of any practice of any religion can be decided without examining the religious texts of that religion,” said Dr. Faizan Mustafa, a constitutional expert and vice chancellor of the NALSAR University of Law in the city of Hyderabad. Sadat said: “By declaring mosques as not integral to Islam, the court has given a broad hint as to which way the verdict in the title suit will go.” He added: “Leaders of the Bharatiya Janata Party (BJP) and other Hindu organizations are celebrating the ruling.” After Thursday’s verdict, Uma Bharati, a BJP leader and a minister in the current government, said: “It is an important day for me.”Bharati, allegedly one of the leaders of a mob that demolished the Babri mosque in 1992, added: “Ayodhya is an important religious place for Hindus because it is the birthplace of Lord Ram.” He said: “For Muslims, it is not a religious place. For them it is Makkah, just like Vatican City is for Christians.” [Source: Arab News]

Hindu zealots will not rest until they have destroyed Islam. Only the Khilafah state can ensure the protection of masjids, churches and other religious sites. Allah (swt) says:

“There shall be no compulsion in [acceptance of] the religion. The right course has become clear from the wrong. So whoever disbelieves in Taghut and believes in Allah has grasped the most trustworthy handhold with no break in it. And Allah is Hearing and Knowing.”