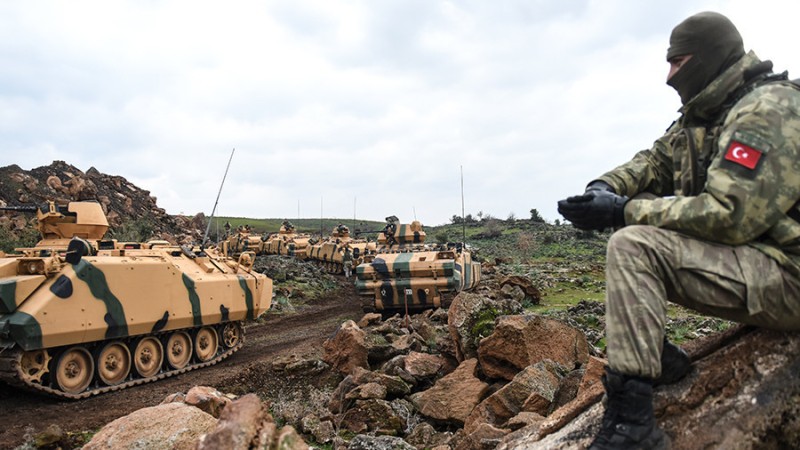 Turkish Government continues to refer Dispute with Muslims to non-Muslims

An agreement with the United States for the removal of a Kurdish militia from the northern Syrian town of Manbij needs to completed by the end of the year, Turkey said on Friday, voicing frustration with what it says is a deal beset by delays.

Turkey and the United States, both NATO allies, have seen their relationship strained by differences over Syria policy. Washington has backed the YPG Kurdish militia in the fight against Islamic State. Turkey says the YPG is a terrorist group and an extension of the outlawed Kurdistan Workers Party (PKK).

In May they reached a deal over Manbij, after months of disagreement, under which Kurdish fighters are to completely withdraw from the town – something Turkey says has yet to happen.

The Turkish leaders continue to refer their dispute with the Kurds to America for resolution, even though the Kurds are Muslims just like the Turks. It is the Turk-Kurd conflict that enabled America to drag Turkey into fighting the revolution in Syria, as America threatened Turkey with a Kurdish takeover of the entire of northern Syria. Consequently, Turkish forces entered Syria and Turkey betrayed the Syrian revolution for America’s sake.

The present agent-rulers of Muslims always prefer the decision of the foreign imperialist disbeliever to the decision of Islam. The Muslim Ummah will not solve its crises and conflicts until it wrests power from such rulers and takes charge of its own affairs in accordance with its noble Deen.

According to the Middle East Eye:

An Iranian Revolutionary Guard Corps (IRGC) commander has said that US military bases in Afghanistan, the United Arab Emirates and Qatar, as well as US aircraft carriers in the Gulf, are within range of Iranian missiles, a sign of rising tensions between Tehran and Washington.

“They are within our reach and we can hit them if they make a move,” Amirali Hajizadeh, head of the IRGC’s airspace division, was quoted as saying by Tasnim news agency.

“Our land-to-sea missiles have a range of 700 km … and the US aircraft carriers are our targets,” he said.

US President Donald Trump has reimposed sanctions on various Iranian industries and institutions since his administration pulled out of a multinational agreement in May that saw Tehran drastically scale back its nuclear programme in exchange for lifting sanctions.

The Iranian leadership is always left making empty threats against the United States which it often calls the ‘great Shaytan’ without ever carrying out any of these threats. In fact, the Iranian government has been fully complicit in the most serious American interventions in the Muslim world, including the US invasions of Afghanistan and Iraq and the US covert war against the Syrian revolution.

Only the proper implementation of Islam will prevent rulers from such complicity with the enemies of Muslims. The ‘Islamic Republic of Iran’ claims to have implemented Islam but as its very name makes clear, Iran follows the democratic republican model rather than the Islamic shar’a.

Britain Conducting Ideological War against Islam at Home and Abroad

A secretive British government counter-terrorism propaganda unit is working on campaigns aimed at changing the behaviour and attitudes of young people in the Middle East and North Africa considered to be at risk of becoming violent extremists, Middle East Eye can reveal.

The campaigns, which have so far run in Tunisia, Morocco and Lebanon, use rap music, graffiti, filmmaking, social media and sports to bolster their credibility and “deliver messages about alternative pathways to vulnerable youth”.

But the British government’s Research, Communications and Information Unit (RICU), which is based within the Home Office’s Office for Security and Counter-Terrorism (OSCT), also plays a key – but less visible – role in the campaign.

Its participation is mentioned in a British Council-commissioned assessment report of the programme, seen online by MEE but subsequently removed from the British Council’s website.

RICU has faced scrutiny in the UK over its role in creating ostensibly “grassroots” Muslim civil society organisations and Muslim-targeted counter-extremism campaigns promoting a “reconciled British Muslim identity”. In some cases, organisations and individuals used in campaigns were not aware that RICU was behind them.

In complete contradiction to the West’s alleged preference for tolerance and ‘freedom of religion’, Western civilisation is in fact built on a specific ideology that bitterly defends itself against all alternates. Muslims must realise that the Western disbeliever will not rest until he crushes Islam completely. Western Capitalism does carry within it the ideas of freedom and democracy. But these only have the appearance of tolerance; in fact they prescribe a very particular type of secular materialistic lifestyle that rejects all others. Undoubtedly, even from their point of view, Islam is incompatible with it.

With Allah’s permission, the world will soon see the re-emergence of the Islamic Khilafah (Caliphate) State on the method of the Prophet (saw) that will rebuild Islamic civilisation on the one true Deen that provides genuine tolerance to those of other faiths, restoring peace and justice to the entire world.

Trump calls out American Supreme Court for Lack of Independence

According to the Chicago Tribune:

President Donald Trump and Chief Justice John Roberts clashed Wednesday in an extraordinary public dispute over the independence of America’s judiciary, with Roberts bluntly rebuking the president for denouncing a judge who rejected his migrant asylum policy as an “Obama judge.”

The West claims that their system, built on ‘separation of powers’ ensures that checks and balances exist within the system to ensure fairness and justice for all. But the US President has just exposed the lie of this theory by pointing to the fact that judges often decide cases, particularly those of grave political significance, in accordance with the political agenda of the President that appointed them.

The system of ‘representative democracy’ prevalent in the West is in fact designed to serve vested interest, the Capitalist elite class, and not the ordinary man in America. Real democracy has only ever been made to work at the level of a city state, and even then only a minority of its population were given citizenship and participatory rights.

Judicial independence has nothing to with making the institution of judiciary separate from the other branches of government, as practised in the West. Real judicial independence is only possible when the judges rule according to a basis that is other than the decree of the ruler. This is why Islam is capable of real justice because judges are required primarily to refer to the Qur’an and Sunnah, which are independent of the decree of the ruler or the vested interests of any elite.