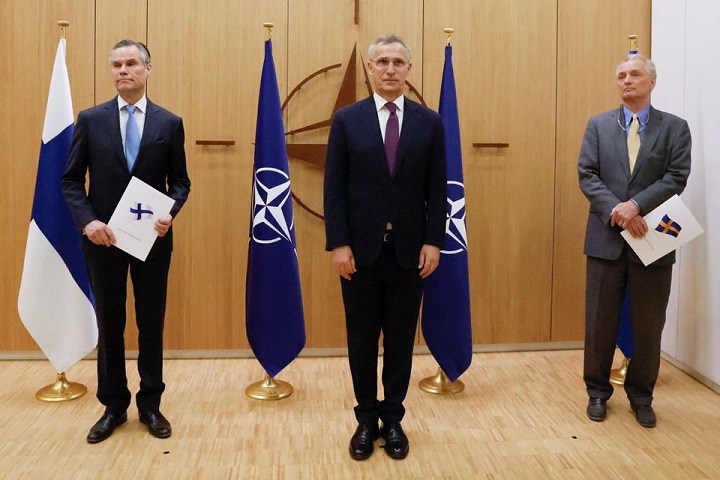 Sweden and Finland have confirmed they will apply for Nato membership in a historic shift that comes as a result of Russia’s invasion of Ukraine. In Sweden, the governing Social Democrats said they backed joining the Western security alliance, paving the way for the country to apply. The announcement came soon after Finland formally announced it too would apply to join the grouping. Russia sees Nato as a security threat and has warned of “consequences”. Sweden stayed neutral in World War II and for more than two centuries has avoided joining military alliances. Finland shares a 1,300-km (810-mile) border with Russia. Until now, it has stayed out of Nato to avoid antagonising its eastern neighbour. In a statement, Sweden’s Social Democrats said they would “work toward” membership, something supported by the public and most opposition parties. A formal application is likely within days.  But the Social Democrats added that they were opposed to stationing nuclear weapons or hosting Nato bases. At a subsequent press conference, Prime Minister Magdalena Andersson said her party believed joining the alliance was “best for Sweden’s and the Swedish people’s security”. Finland’s President Sauli Niinisto earlier confirmed his country would apply, calling it a “historic day”. He spoke to Russia’s President Vladmir Putin about the decision, saying he wanted to “say it straight”. “I, or Finland, are not known to sneak around and quietly disappear behind a corner,” he said. Russia’s president had previously told Finland it would be a “mistake” to join Nato, which was founded in 1949 to counter the threat from the Soviet Union. President Putin mentioned Ukraine’s intention to join the alliance as one of the reasons for the invasion.

Putin’s war in Ukraine to restore Russia’s security has backfired and strengthened NATO. It is difficult to see what actions Putin can take to weaken NATO. Instead, Putin is facing a strengthen alliance under the auspice of the US, which seeks to weaken Russia further.

US to Work with Pakistan on Border Security, Counterterrorism

Responding to a question about restoring US security assistance to Pakistan, the department’s spokesperson Ned Price said at a news briefing that Washington wanted to continue its cooperation with Islamabad in some areas. “We value our bilateral relationship. We want to continue to work together in areas where we do have mutual interests with our Pakistani partners,” he said. “That includes counterterrorism. That includes border security as well. ”Commenting on the observation that the situation in Afghanistan had increased terrorist attacks in Pakistan as well, Mr Price mentioned last month’s attack at Karachi University that killed three Chinese and a Pakistani. [Source: Dawn]

India’s pledge to feed the world still holds more than a grain of truth. After global wheat supplies were disrupted by the war in Ukraine, Prime Minister Narendra Modi said India was ready to step up its trade. But a heatwave is singeing fields and threatening to drive domestic production of wheat down to levels last seen in 2017. Even so, the country’s rice exports matter more in global food security. An export ban on wheat announced on Saturday eases pressure on India’s average retail wheat flour prices that are at a 12-year high and protects consumers. That will come at the expense of farmers, whose incomes have already been squeezed hard in recent years, and who will now need to sell their crop for lower prices to the government. It raises the political heat on food security worldwide. Before the ban, India had been the only major supplier in global markets, due to worsening water scarcity in Brazil, the United States and Europe. Economists at Citi calculate India might still have some spare wheat to send overseas. If so, its neighbours including Bangladesh and Sri Lanka, which is in the midst of an economic and political crisis, are likely to be first in line. [Source: Reuters]

India can barely feed its own people, and the Ukraine war has made Modi’s government the sole player to insulate the world from global food riots. It is very unlikely that India will be able to plug the shortfall, and the world will soon witness food riots on an unprecedented scale.