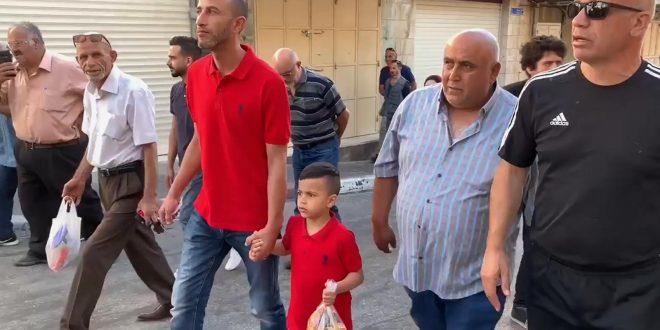 The usurping Jewish entity’s forces have called for the child Malak Sidr (8 years old, from the city of Hebron (Al-Khalil)) after raiding her family’s house in the city centre and have given her father notice to interrogate her as she was charged for disturbing the settlers. Prior to this incident, the child Qays Firas Obaid (6 years old) from Al-Aysawiyah [Isawiyah] was also summoned for interrogation, on the pretext of throwing a stone in the direction of a vehicle belonging to the occupying forces while they were storming into the town. This is within a few hours from the arrival of the child Mohammed Rabie Alayna who is 4 and a half years old at the occupier’s police station in Jerusalem after he was called in for interrogation for the same excuse.

The occupier continues its barbaric policy over the people of the Blessed Land – Palestine by all means, and summoning these children to interrogate them no matter the excuses, is just another episode of the series of this criminal policy, riding roughshod over all the humanitarian components and also over all that they claim of human and childrens rights. Instead of stopping the usurping settlers from torturing the people of the Blessed Land – Palestine, they are interrogating a female child for disturbing these criminals!!

According to statistics there are around 230 children in the Jewish entity’s prisons amongst the 5700 Palestinian captives, and the Jewish courts have rendered within the past three years judgements upon children who are mostly from Jerusalem, with most of them being accused of throwing stones. In June 2015, the Knesset legalised a law that increases the imprisonment period of the Palestinian stone-throwers to up to 20 years. Also, the council of ministers responsible for the political and security affairs (Cabinet) has allowed for the expansion of the power given to the police force to shoot stone-throwers.

The Jewish entity is considered to be the only one in the world to prosecute children in military courts despite even statutory laws which prohibit this.  For example, the international conventions of human rights particularly the Convention on the Rights of the Child (UNCRC) insists on the importance of providing protection to children and their lives and to be given the opportunity to grow and develop. These conventions have restricted depriving children their freedom. However, the occupier has made killing Palestinian children and their imprisonments its first means of sanctuary. So if such children, whose age doesn’t exceed the number of fingers in one’s hand, triggers their fear and panic and they want to suppress them and scare them so that they don’t grow to become courageous youth honored by their religion who work towards expelling them and cutting their roots, so how about if there was a massive army armed with strong belief in Allah and determination?!!

So O Muslims: These are the Jews and this is their army that the Ruwaibidaat (incompetent) rulers constantly delude you to believe are invincible… who storm into a town to arrest children!! They make a child who does not exceed 4 years old, a target of interrogation while your rulers that you are satisfied with are rushing towards normalizing the relationship with them and to contract treaties and submissive conventions that are degrading and humiliating.

Meanwhile, these are the children of Palestine who act as lions since their childhood. They just need an entity to guide them and not deviate their compass from the direction of getting rid of the occupation and restoring Palestine, and that would be the massive army led by a protective leader that will free the country and people by the will of Allah (swt) and that is not far for Allah (swt).