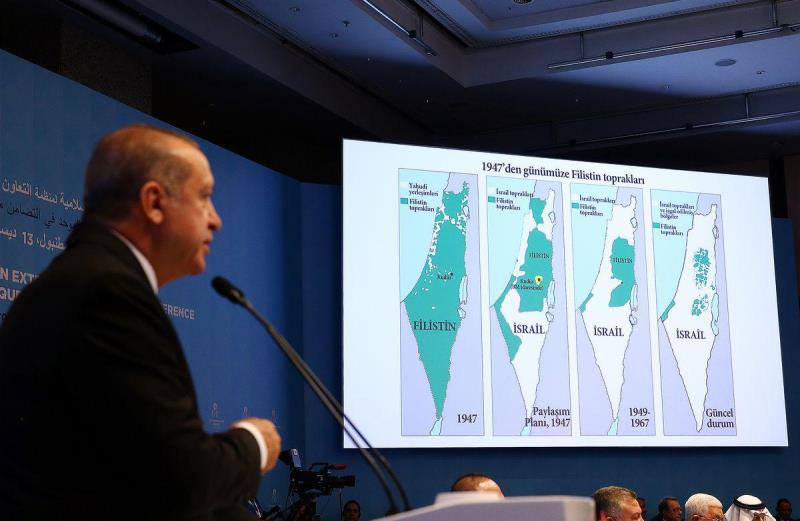 “They are the enemy, so beware of them. May Allah destroy them; how are they deluded?”

On December 13/12/2017, the leaders of fifty-five countries of the Islamic lands gathered in Istanbul to respond to Trump’s decision to declare Al-Quds (Jerusalem) as the capital of the Jewish entity, and as usual they did not disappoint the Muslims, the speakers outdid themselves in condemnation and denunciation, because they are only agents of the Kaffir colonial West and its tools in the war on Islam, and its efforts to prevent Muslims from resuming the Islamic way of life, and to ensure the security of its interests, and enable it to plunder our wealth and colonize our land.

And by reviewing their statements, we find that they all stopped at demanding the adoption of East Jerusalem as the capital of the “alleged” State of Palestine, in accordance with the resolutions of the so-called international law!

Their reference point is the international law, that were drafted by the kaffir colonial states, only for securing their colonial interests to destroy the Muslim Ummah after they destroyed the Khilafah; they have divided the Muslim countries into fifty-five deformed countries that sanctify the law of kufr and fight the Law of Allah and His Messenger!

With this act, they have expressed their loyalty to their masters, graceful employers, the colonial countries.  Although if they have committed themselves to the slogan of their organization “Islamic cooperation” they would have realized that Islam requires the unity of Muslims under one state led by one imam, not more. Imam Muslim narrated from the Messenger ﷺ his saying:

“If a pledge is given to two Khaleefahs (Caliphs), kill the latter.”

And his saying ﷺ:

“There will be strife and sedition, whosoever wants to divide the Muslim unity; strike him with the sword, whoever he may be.”

And his saying ﷺ:

“Whoever wants to break your rank and divide your group while you are united under one man (ruler), kill him.”

Imam Al-Nawawi said in “Sharh Muslim”: It is the order of fighting the one who went out against the imam or wanted to break up between the Muslims and so on, and to forbid him, if he is not deterred he should be fought, and if his evil is not removed except by his death then he should be killed.  The Hadeeth is a proof that forbids having more than one imam or two Caliphs because that leads to division and disunity, and the occurrence of sedition and the disappearance of blessings, this is transmitted by consensus. He said that the scholars agreed that it is not permissible to appoint two caliphs at the same time.”

So tell us, leaders and rulers: which law do you refer to, to the law of Allah or to the law of the enemies of Allah? Is it permissible in Allah’s law to “make peace” with the Jewish entity by giving them most of the land of Palestine?! Does Allah’s law permit the disintegration of Muslim countries into dozens of states? Or does it require their unity? You know very well that when the Ummah unites as one state, its state would be the number one state in the world in all fields, and all the countries of the world will seek to appease it. America and others would not have dared to take any decision against it; neither would there be any presence for the Jewish entity.

The issue is not Trump’s declaration that Jerusalem is the capital of the Jewish state, while the Muslim rulers gathered in Istanbul, the capital of the Ottoman Khilafah, call for the declaration of East Jerusalem as the capital of Gaza and the West Bank or what they call the Palestinian state. They recognize that the west of Jerusalem, rather all the land of Palestine, belongs to the Jewish entity! But the issue is that Palestine with its Jerusalem and all its cities and villages is a Kharaji Islamic land owned by the entire Islamic Ummah until the Day of Judgment. It must be liberated and the Jewish entity must be uprooted, only by the Muslim armies. Neither the political negotiations nor the long and short truces, not even the uprisings of the people of Palestine, however many, will liberate Palestine. Rather it will be liberated by a fully-equipped military force that adheres to Islam, has Iman, planning, training, heavy weapons, aircraft, tanks, missiles and cannons.

These rulers carry out the orders of the enemies of the Ummah, by trying to persuade it to accept the existence of the Jewish entity and have peace with them, in exchange for recognition of this monstrous entity of a fragile state for the people of Palestine in the West Bank and Gaza Strip and East Jerusalem. It is no secret to any of you, that some of them recognize the Jewish entity, its flag openly flutter in Cairo, Ankara and Amman, and in the rest of the Muslim countries in secret.

These rulers are committing crimes against you in Ash-Sham, Yemen, Libya, Egypt, Tunisia, and others. They rule you with iron and fire, and they forbid you to abide by the law of your Lord, do not believe their lies, and do not support them in their injustice, do not listen or obey them.

There is no hope in these rulers. Those who have openly showed peace with the Jewish entity are hypocrites. Those who claim to be reluctant to normalize their relationship with it are also hypocrites.  They all betrayed Allah and His Messenger and the believers, and turned your armies to protect their thrones and preserve the interests of the colonial powers and kill you, instead of directing them to fighting in the cause of Allah and the liberation of occupied Muslim lands, and the spread of Islam. There is no hope in them at all, but the hope after Allah (swt), is in you in the removal of these tyrants and prevent them from controlling you, and in your quest to achieve your unity under the shade of the rightly guided Khilafah (Caliphate) on the method of Prophethood.

And you, leaders of the Muslim armies, have you prepared an answer to give to the Lord of the Heavens and the earth when He (swt) asks you about your silence on the betrayal of these Ruwaybidha (incompetent) rulers, while you see their treachery openly, and witness their speed in obedience to the enemies of Allah and your enemies?

As for the sheikhs and scholars, we remind them that they are the heirs of the prophets and that the burden of leadership of the Ummah falls on their shoulders, to confront these oppressive rulers, and to proclaim the word of truth and to call for the full implementation of Allah’s law.  And the priority is to revive the obligation of Jihad, not only to liberate the occupied lands, but to spread Islam to the world.

O Allah, grant us your promise of Istikhlaf (the emergence of the Khilafah); empowerment and domination, and prepare for us the people of power who give us the support, and enable us to liberate Bait ul Maqdis and purify it from the abomination of the Jewish entity.