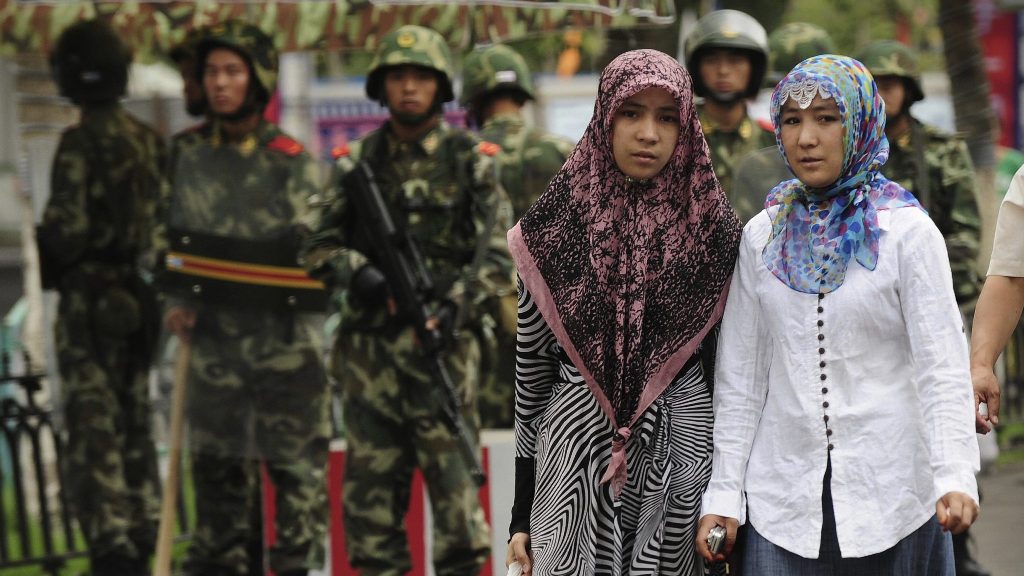 Radio Free Asia (RFA) reported recently that according to sources in China’s ruling Communist Party, Muslim Uyghur women in East Turkestan, whose husbands are detained in China’s ‘communist indoctrination’ detainment camps, are “forced to share beds” with male Chinese officials who have been assigned to monitor them in their homes.

This deeply invasive form of surveillance of Uyghur Muslims is part of the Chinese regime’s “Pair Up and Become Family” programme started in 2017, under which 1 million spies, mostly male from the Han ethnic majority, have been deployed by the government to stay in Uyghur households for around 1 week every 2 months. The regime has sickeningly called these spies ‘relatives’ of those Uyghur Muslims they co-habit. Their role is to elicit information from their ‘host’ families regarding their scale of adherence to Islamic beliefs, political views and practices and to indoctrinate them with atheist communist culture in order that they give their allegiance to the Chinese state.

One Chinese official who oversees 70 to 80 Uyghur families in Yengisar county, told RFA that these spies, “stay with their paired ‘relatives’ day and night” and that they ‘help’ the Uyghur families, “with their ideology, bringing new ideas” and “talk to them about life, during which time they develop feelings for one another.” He also stated that it was, “now considered normal for females to sleep on the same platform with their paired male ‘relatives’.”

The head of a neighbourhood committee in Yengisar also confirmed to RFA that male officials, “regularly sleep in the same beds or sleeping platforms with female members of the Uyghur households during their home stays.” Those Muslims who refuse these ‘home visits’ can be branded as potential extremists and face possible detention in China’s Gulags. Dolkun Isa, the president of the Munich-based World Uyghur Congress exile group described the “Pair Up and Become Family” campaign as representing the “total annihilation of the safety, security and well-being of family members” and that the programme has “turned Uyghurs’ homes into prisons from which there is no escape.” The RFA also stated that it spoke to a township and village secretary in Hotan prefecture earlier this year who said that those officials who stay with Uyghur families, bring alcohol and meat that includes pork and expect family members to consume them.

There is no limit to the sickening extent that the despicable Chinese state will go to humiliate our brothers and sisters in East Turkestan in their attempt to erase every trace of their Islamic identity. And there is no limit to the shameful scale of betrayal of the rulers and regimes of the Muslim world who continue to cozy up to this brutal anti-Muslim anti-Islam state, and who refuse to even condemn its criminal treatment of the Uyghur Muslims, for the sake of their self-serving economic and political interests. For any sincere Muslim, the blood boils and the heart aches to hear of such heinous violation of the honour of our sisters, and vile intrusion of their private lives, as well as the relentless repression they are subjected to under this communist tyrannical state.

However, for the leaders and governments of the Muslim lands, it is business as usual with Beijing. It is clear that no scale of horrendous persecution or suffering of this Ummah, nor attack on the Deen of Islam is enough to move them even one step towards protecting any oppressed Muslim. Imran Khan for example, Prime Minister of Pakistan, who presents himself as a champion for the rights of the oppressed Muslims of Kashmir (while in reality doing absolutely nothing to end their plight), continues to be utterly muted regarding China’s brutal treatment of the Uyghur Muslims.

In fact, his stance has been of strengthening his relationship with this Islam-hating communist dictatorship, having no shame in offering a warm embrace to a state that is waging a war against the Deen of Allah (swt). Earlier this month, at the ninth Joint Cooperation Committee meeting of the China-Pakistan Economic Corridor (CPEC), the two sides signed further agreements for cooperation in the field of trade and health. Pakistan also sought a 9 billion dollar loan from China to finance road and infrastructure projects. China’s National Development and Reform Commission Vice Chairman Ning Jizhe commented that both sides had reached important consensus over bilateral cooperation in all domains, stating, “The Chinese side will implement the consensus reached by the leaders of both sides and will enhance coordination, strengthen mutual trust so as to achieve more pragmatic results under CPEC and to forge a closer China-Pakistan community of shared future in the new era.”

Allah (swt) says, وَإِنِ اسْتَنصَرُوكُمْ فِي الدِّينِ فَعَلَيْكُمُ النَّصْرُ “But if they seek help from you in the matter of religion then it is your duty to help (them).” Fulfilling this Islamic obligation towards our oppressed brothers and sisters in East Turkestan, Palestine, Kashmir, Syria and elsewhere cannot be achieved through continued reliance on the UN or western governments or the current sell-out Muslim rulers and regimes, for they have repeatedly shown that they care only for the dollar in their pockets.

Having hopes in the international community to solve our problems as an Ummah only maintains the status quo and prolongs the terrible suffering of our brothers and sisters. Fulfilling the duty that our Rabb (swt) prescribes upon us in the verse above requires for us to take our affairs as Muslims back into our own hands and seek the solution to our problems from our own Deen: Islam.

This Deen defines the Khilafah (Caliphate) based upon the method of the Prophethood as the only means to truly protect the Muslims, our honour and our Islamic beliefs, for it is our shield and guardian – as described by our beloved Prophet ﷺ «وَإِنَّمَا الإِمَامُ جُنَّةٌ يُقَاتَلُ مِنْ وَرَائِهِ وَيُتَّقَى بِهِ» “Verily the Imam (the Khaleefah) is a shield from behind whom you fight and by whom you are protected”.

Therefore, if we truly want to bring an end to the unbearable plight facing the Uyghur Muslims and other Muslims globally, then we must focus our full attention and efforts upon the urgent establishment of this Islamic leadership.