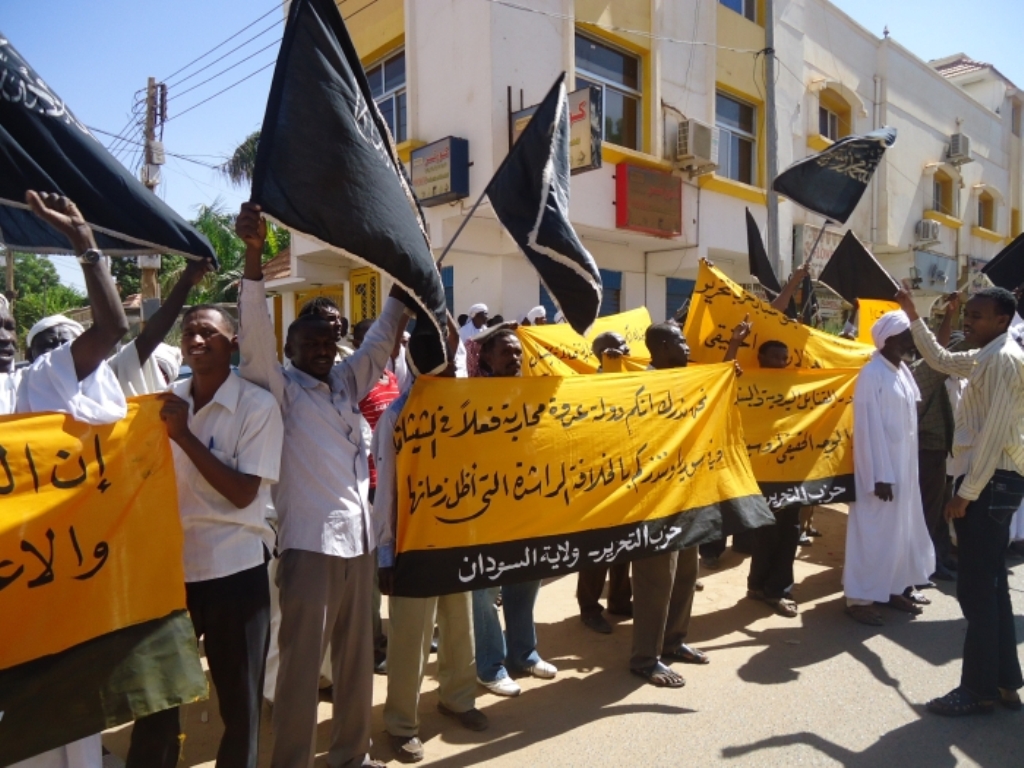 On Wednesday 6/11/2019 after Asr prayer, the youth of Hizb ut Tahrir / Wilayah of Sudan, conducted at Al-Abyad city in Northern Kordofan province, a peaceful demonstration that took off from Al-Jami Al-Kabeer Mosque till Siwar Athahab Mosque chanting that Islam is being attacked, and declaring the absolute refusal of all the conventions that are not in accordance to Islamic ruling for example the Convention on the Elimination of All Forms of Discrimination against Women (CEDAW), and the likes, from changing the rulings of the Lord of the worlds, equality between the two genders, a man and a woman, and the refusal of the deviated ideas e.g. secularism and the likes.

A massive gathering of people leaving the Jami Al-Kabeer Mosque joined the demonstration, in addition to the crowds that joined the demonstration from Al-Souk al-Kabeer (Great Bazaar), as well as the people praying in Siwar Al Dahab Mosque. The demonstration circumambulated the streets of Al-Souk al-Kabeer at Al-Abyad city, and they stopped at the courtyard of Siwar Al Dahab Mosque so people interacted strongly with the demonstrators, and in a great manner, that indicates the Ummah’s awareness of the surrounding deception against it, and this indicates its love for Islam, and its refusal of changing its rulings.

Ustath Alnatheer Muhammad Hussein, member of the Wilayah Committee of Hizb ut Tahrir / Wilayah of Sudan, gave a speech where he briefly defined CEDAW. He also clarified how it contradicts the Ummah’s creed and the Shariah of the Lord of the Worlds, and attacks the social system of Muslims. And that the state of Muslims is the Khilafah Rashidah (the rightly guided Caliphate) upon the method of Prophethood, is the impregnable fortress for the Islamic Ummah, and had the Khilafah been established the colonizing non-believers agents would have not dared to seek entrance in complete obedience to the non-believing West and its legislations.

They also interacted with the speech of the member of the Wilayah Committee Ustath Alnatheer Mohammed Hussein by saying Allah is great, and by chanting (Labbayk ya Rasuul Allah) and (La illaha illa Allah, Khilafah is the promise of Allah). The gathered masses also demanded to continue mobility as this shows that the Ummah adopts Islam and refuses all that contradicts it.