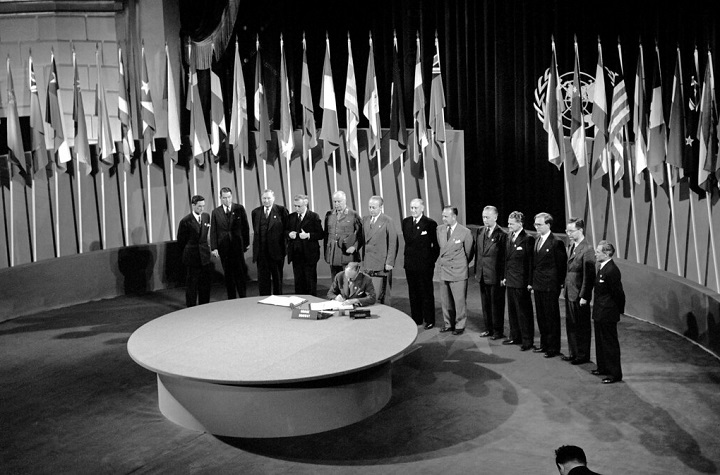 Those who follow the work of the United Nations in Yemen in recent times will clearly realize what it is aiming at through its sponsorship of any talks between the parties to the international conflict over Yemen, America and Britain; meanwhile, its envoy is sponsoring a dialogue between the delegation of the so-called legitimacy and the Houthi delegation in the Jordanian capital, Amman, for the purpose of opening roads in Taiz and others, which were closed seven years ago, as the people of Yemen suffer from the scourge of humiliation and extortion of travelers.

Any dialogue sponsored by the UN is not intended to alleviate the suffering of the people of Yemen, but rather to implement the plans of the colonialists. This is what the people of Yemen must realize, and this is its dark history. That organization that arose after the Second World War after the signing of its founding charter at the San Francisco Conference, at an American initiative in 1945, and an heir to what was called the League of Nations, which in turn inherited the international family that arose in Europe in the sixteenth century, to confront the threat of Islam, when the armies of the Khilafah (Caliphate) State hastened to conquer Europe, country after country, carrying the message of Islam to save and liberate its peoples from the tyranny of kings and the priesthood of the church and its men, until the walls reached Vienna, and panic and fear gripped the hearts of the Crusader kings and feudal lords over their authority. With its Security Council, this organization has today become an American tool to serve its colonial projects and schemes against Islam and Muslims in particular, and the world in general.

Also, the follower of the history of this organization since its establishment until the present time, can only see with clarity, that it was and still is an instrument of oppression and suppression against all vulnerable peoples, especially Muslim countries, for the benefit of the major powers and their projects in the world. It gave part of Palestine to the Jewish entity. In the year 1947 and by an international resolution, it recognized the usurped Jewish entity in the year 1948. America also invaded and destroyed Iraq under the umbrella of United Nations resolutions, and before that it wreaked havoc in Africa; in Congo Kinshasa under the umbrella of the United Nations in 1960, and this was repeated in Somalia, and in Rwanda in 1994, where more than 800,000 Tutsis were slaughtered within 100 days with the UN forces knowing in advance of these plans, and later in Srebrenica in 1995, where more than 20 thousand Muslims at the hands of the Serbs in the area that was under the protection of the UN forces, and what the UN has done as well in Syria, Yemen, Sudan and other countries. This is in the political aspect, while in the rest of the other aspects it has spread corruption, destruction, poverty and humiliation in all aspects of life as a whole.

Islam imposes on Muslims that their countries be united in one state, that all their peoples be united in one state under the banner of one caliph, and that they rule in all aspects of life by the rulings of Islam and nothing else. Islamic law forbids Muslims to be torn into multiple countries or to have multiple presidents. But the Kufr states feared the unity of the Muslims, so they tore them into small, weak, belligerent states in order to make it easier for them to colonize and humiliate them. Thus, Muslims nowadays have more than 46 countries that have entered into the body of the United Nations and enjoy the protection of international law. If a state is established that wants to unite the Islamic countries, a list of the colonial Kafir countries will be established, claiming that this is contrary to international law, and decisions are issued to prevent this unity by force.

Therefore, it is incumbent upon the people of Yemen in particular, parties, activists, journalists, every politician with reason and insight, and Muslims in general, to stand against the actions of the UN, and work to demolish it and undermine its structure. By exposing its falsehood, exposing its reality, and showing its organic and close connection with the interests of the Kafir West, and that it is a tool of oppression and injustice used to serve the Kafir and preserve its interests, and even humiliate and subjugate all other countries of the world to this rotten and inevitably fleeting capitalist system. The darkness must pass away, and the light of Islam represented by the second Khilafah Rashidah (rightly-guided caliphate) upon the method of the Prophethood will inevitably come soon, Allah willing, and will illuminate the whole earth with His justice and mercy.

“So endure with beautiful patience,they truly see this as impossible but We see it as inevitable.” [TMQ Al-Ma‘arij: 5-7].