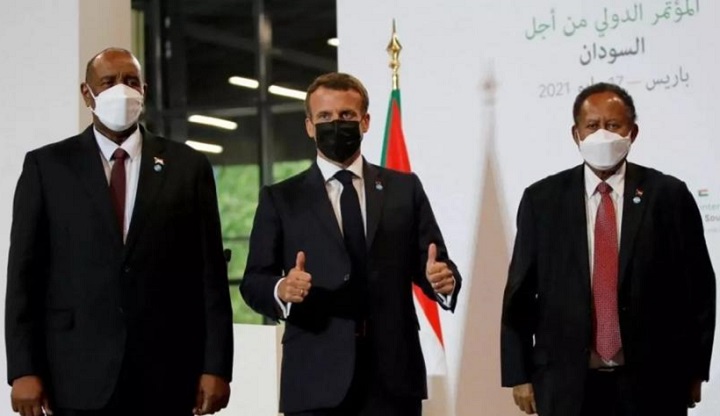 It was announced that Lieutenant General Abdel Fattah Al-Burhan, Chairman of the Transitional Sovereignty Council, and Abdullah Hamdok, Prime Minister, and their accompanying delegation had arrived in Paris to participate in the so-called Paris Conference in Support of Sudan. The Transitional Government revealed that dozens of projects have been prepared in various fields to be presented at this conference, including energy, infrastructure, communications, livestock and other sectors. Hamdok told Al-Hadath TV Channel: “We are going to Paris in order to provide foreign investors with investment opportunities in Sudan.”

We in Hizb ut Tahrir / Wilayah Sudan want to affirm the following facts:

First: Sudan does not need grants or loans. Rather, it needs a rightly guided political idea, and men who know how to explode the nation’s energies and extract its wealth for the benefit of the country and its people, and it has been practically proven that the current and former rulers have no concern but pleasing the Kaffir colonial West, who in turn is interested only in stealing the country’s wealth through alleged investment and deadly riba-based loans.

Second: During its two years of existence, the Transitional Government has been keen to implement the policies of the Kaffir colonial West, through the IMF and the World Bank, the result was creating poverty and killing of the poor by catastrophic IMF dictates, where the local currency fell to the bottom, until one dollar became equal to more than 400 pounds, and the government has raised the prices of bread, fuel, electricity, and other commodities exponentially, and despite that they are lacking. It is a tame policy in order to give these sectors to foreign investors, as the Prime Minister has promised, and even medicine has become a distant dream for the poor after the dramatic price increases, despite the government’s claim that it supports it.

Today, as the government is heading to Paris – the center of immorality and corruption – the health community was surprised by undeclared increases in drug prices, some of which reach 400%, and there is no power and no strength except in Allah.

Third: It is shameful and disgraceful for this government to present the country’s wealth and capabilities at the Paris auction, and the people of Sudan are killed by poverty despite the richness of Sudan with its apparent and underground wealth, which is now being exhibited in the alleged investment market, so the situation of the people of Sudan is represented in the poet’s saying:

“Like a camel in the desert dying of thirst…. while carrying water on its back.”

In conclusion: We in Sudan do not need the Paris Conference or anything else. Rather, we need men who will make their policy stem from the doctrine of this Ummah, so they apply the rulings of the Lord of the Worlds that relate to wealth and other things, so prosperity will be achieved with Allah’s approval, and His blessings come down to us, the Almighty said:

“And if only the people of the cities had believed and feared Allah, We would have opened upon them blessings from the heaven and the earth; but they denied [the messengers], so We seized them for what they were earning.” [Al-A’raf: 96].

O rulers of Sudan, the good is here, not in Paris; goodness is in our land, in the Book of our Lord, glory be to Him, and the Sunnah of our Prophet (saw). If you do not know then give the order to its people, rather, give it to Hizb ut Tahrir to establish with the Ummah the second Khilafah Rashidah (rightly guided Caliphate) on the method of the Prophethood, which cuts off the hand of the colonizer and his aides, and the wealth of the country is invested in the interest of the Ummah. Only this is what creates a decent and dignified life for all people.