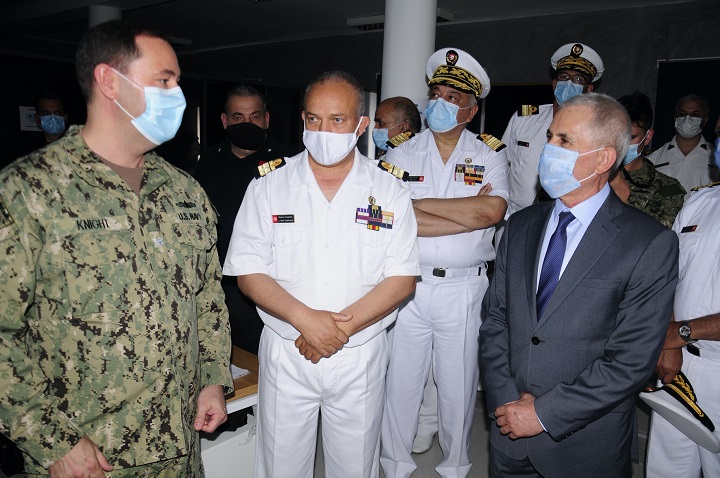 At a time when the criminal Jewish entity burns Palestine and rains rockets on its people, and at a time when Europe and America support the monstrous Jewish entity, the authority in Tunisia is allied with the aggressors and under the command of the Americans it conducts 12-day military exercise. On Sunday 16/05/2021, a military exercise under the name “Phoenix Express 21” was launched on the Tunisian North Coast Show, with the participation of 4 military ships belonging to the Tunisian Navy, 5 foreign military ships and 130 officers, from 12 countries which are America, Britain, Algeria, Egypt, Libya, Morocco, Mauritania, Italy, Spain, Belgium, Greece and Malta. The exercise, which will run until 28 May, is supervised by the U.S. Africa Command (AFRICOM), under the direction of U.S. Officer Harry Knight, who said: “Exercises such as Phoenix Express 2021 increase interoperability among participating nations in order to increase maritime security and sustain global commerce”, and added “Our maritime exercises allow us to develop our skills with our regional partners.”

1- Britain is the enemy of Muslims, as it brought down our state, tore apart our country, and planted the criminal Jewish entity, and America fights us everywhere and provides the Jewish entity with ways for survival. It supplies it with weapons and supports it internationally, as news agencies have announced these days the biggest arms deal between America and the Jewish entity. This America that the rulers of Tunisia introduced today and made our soldiers and officers under its command says that Muslims in Gaza are terrorists and murderers, it says that the children and women of Gaza are terrorists and deserve to be killed!

2- The stated goal of these exercises, according to the U.S. officer who directs them: “to increase interoperability among participating nations in order to increase maritime security” which means that America and Europe want to guarantee the western region of the Islamic countries by controlling its armies to protect their interests and protect the Jewish entity. Yes, America wants to control the Mediterranean and wants to have complete control by making the armies of the region (Algeria, Morocco, Mauritania, Libya, Egypt and Tunisia) under its sights to proceed according to its orders.

3- Instead of Muslim armies heading towards Palestine for the relief of Palestine and Al-Aqsa from slaughter and killing, the rulers of evil put them under the command of the enemy. And at a time when the Jews are slaughtering our brothers, children and women with the weapons of America and Europe, the rulers of the region use our soldiers and officers to protect the Jewish entity and protect Western interests! What will the Jewish entity fear of and the armies of Muslims are under the command of traitors?

The participation of the Tunisian, Algerian, Egyptian and Moroccan maritime forces in joint exercises with America and Europe that support the Jewish entity in its crimes is an alliance with the enemy in wartime, and the alliance with the enemies in wartime is a great betrayal, only committed by a traitor to his people, his religion, his nation and his country, for he has lost his honor, manhood and disgraced himself so he sold it cheaply, he sold it with the blood of his people.

Here you see these treacherous leaders how they made you through malevolent agreements under the command of your enemies and the enemies of your people. Yes, they made you under the leadership of the enemy during the wartime in the Blessed Land Palestine. They made you under the command of America that wants to protect the Jewish entity, do you accept to participate in the protection of a criminal entity that kills your people?! Do you accept this humiliation and shame?!

Isn’t it a time for war? Your brothers are being killed day and night with the weapons and of America and Europe and by their orders, while you watch?! Didn’t you hear the crying of orphans and the cries of the bereaved?! where are you?! do you not reason?! Is there not a man of reason among you?! Isn’t blood boiling in your veins while you watch and hear the brutal aggression of the Jews on the blessed land?! How do you incline toward traitorous semi-rulers?! Don’t you move?! Did you not read the Noble Qur’an and realize that relying on oppressors is a great issue, a great torment?!

There is no justification for treason, and there is no obedience to a traitor or a neglectful person. And it has become clear to you that these rulers are nothing but guards of the Jewish entity, and servants under the command of the enemies, so how do you obey them?! Rather, how do you guard and protect them when they made you watchmen for European and American interests?! Turn to your senses and reject these humiliating military agreements with America and Britain, reject this vicious alliance with the enemies, and be on the side of your people, your country and your Ummah, and respond to the call of your Lord (swt) Who says:

“O you who have believed, what is [the matter] with you that, when you are told to go forth in the cause of Allah, you adhere heavily to the earth? Are you satisfied with the life of this world rather than the Hereafter? But what is the enjoyment of worldly life compared to the Hereafter except a [very] little. If you do not go forth, He will punish you with a painful punishment and will replace you with another people, and you will not harm Him at all. And Allah is over all things competent.” [At-Tawba: 38 -39].