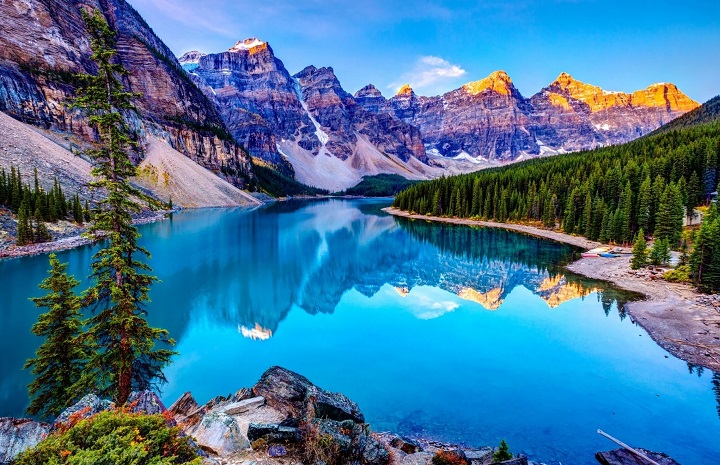 Allah (swt) has revealed many noble Ayaat directing the human beings to consider all that is around them, reflecting and considering their nature, as an act of Creation. Many such Ayaat were revealed within the first three years of Revelation. It was with these Ayaat that the Messenger of Allah (saw) cultured the great Companions (ra) within the Halaqaat (study circles) that took place in Dar ul Arqam. It is these Ayaat about the act of Creation that firmly established the deeply rooted Iman of the Companions (ra), such that they tower above all generations until the end of time, the best of all generations.

Since deep study of Revelation was the foundation of the education policy of the Khilafah (Caliphate), the Muslim population was aware of the Quranic commentary upon Creation. It is these Ayaat that were the basis for the consolidation of the conquests. They were used for culturing legions of people and convincing them to embrace Islam. It was to a level that the common citizens were able to convince the non-Muslims. As an example, Indonesia is Ushri lands as Islam entered through the Da’wah of the Muslims who traded with its population.

It is vital to scrutinize such Ayaat, benefitting of their abundant wisdom, at a time that there are many in the world that are being misguided by the atheists. Yet many are searching for the truthful and convincing answer regarding all that they see around them of Creation. It is opportunity for the Muslims in the West who live amongst the non-Muslims. It is also an opportunity for the Muslims in the Muslim World as the social media has made communication over long distances possible. All this is before the return of the Khilafah, where such good individual activity will be supported by the states Dawah to Islam.

“Behold! In the creation of the Heavens and the Earth, in the alteration of the Night and the Day, the ship which sails upon the sea with that which is of use to man, the water which Allah sends down from the sky, thereby reviving the earth after its death, and dispersing all kinds of beasts therein, and (in) the ordinance of the winds, and the clouds obedient between Heaven and Earth: are signs for people who have sense.” [TMQ Baqarah: 164].

The mother of the believers, Aisha (ra), said that the Messenger of Allah (saw) when he read this verse, said, «وَيْلٌ لِمَنْ قَرَأَهَا وَلَمْ يَتَفَكَّرْ فِيهَا»“Woe to those who read it and did not think about it.” [ad-Dar al-Manthur]. Thus, Allah (swt) and His Messenger (saw) ask humanity to reflect upon all that is around them. When the human beings consider the Creation, what do they find? They find a precise system (niZaam) which governs all the entities that we sense. All the entities that we sense around us, large and small, light and heavy, have precise limitations (Hudood) that govern them. There are laws that are imposed upon them that they do not transgress and a sunnah (way) that they consistently adhere to. Indeed, they are limited (meHdood) and that is clear in all of the entities and not some.

Consider the movements of the stars and planets. There are heavens and the earth, including the stars and planets that are each in an orbit in a precise system. In spite of their mass and motion, they do not deviate from their course. Is this not a precise system, of determined relationships and magnitudes? Consider the night and the day. There is the night and day, their succession and the differences in their lengths, conditions, darkness, light and illumination, their impact upon the sleep and activity of the living. Is there not a precise system governing the night and day? Consider the ships and the seas. Imam Qurtubi commentated in his Tafseer:والفلك التي تجري في البحر الفلك: السفن “Fulk’ (ships) are those that travel on seas: watercraft (generically).” He adds that, تجري على وجه الماء ووقوفها فوقه مع ثقلها“so that they move on the surface of the water and float in spite of their weight.” Indeed, there is a precise organization regarding the water and the ship, in which one form of watercraft whilst another object of the same mass will sink.

Then, there is the water that descends as rain from the heavens to the earth, reviving the earth is revived after being barren and becomes covered with lush greenery, after having become withered, yellow. Then there are animals that spread on the earth, which multiply, reproduce and live off that which the earth gives forth, through the water that falls upon it. Then there are winds that flow moving clouds, delivering rain here or there according to a certain system and arrangement that is not violated.  Imam Qurtubi stated that, فسأله ابن عباس: هل سمعت كعب الأحبار يقول في السحاب شيئا؟ قال: نعم، قال: السحاب غربال المطر، لولا السحاب حين ينزل الماء من السماء لأفسد ما يقع عليه من الأرض “Ibn ‘Abbās asked him (Tubay’), “Did you hear Ka‘b al-Aḥbar say anything about clouds?” “Yes,” he replied, “he said, ‘The clouds are like sieves for the rain. Were it not for the clouds, when water descended from heaven, it would ruin the earth on which it fell.’”

When we sense and perceive all the entities around us, it is evident that there is a system (niZaam). Within that system, there is no chaos or disruption, no breaking out from the orbit, no greenery without water, no sea in the wrong place nor wind at the wrong time. It is a consistent and determined system. Allah (swt) said,

“[And] who created seven heavens in layers. You do not see in the creation of the Most Merciful any inconsistency.” [Surah al-Mulk 67:3]. Ibn Kathir commentated, أي: بل هو مصطحب مستو، ليس فيه اختلاف، ولا تنافر، ولا مخالفة، ولا نقص، ولا عيب، ولا خلل“means, it is done in a flawless manner, and these are connected with each other so as to form a levelled form, having no disunion, conflict, inconsistency, deficiency, flaw or defect.”

So we see that all the entities around us adhere to a perfect, flawless system. Entities are subject to an intricate system in both formation (takayyuf) and proportioning (taqdeer). Regarding formation (takayyuf), each entity is dependent on one or many entities. So greenery is dependent (moHtaaj) on water and sunlight to grow. Greenery is weak in itself for it is needy for water and sunlight. The form of dependency (iHtiyaaj) is not of any measure, but of a specific proportion (qadar) and amount (nasbah). The proportioning (taqdeer) is evident in all cases that we sense. If the sunlight is of a certain amount, the plant will thrive. If it is less, it will wither. Moreover, if it were intensified through a lens or by other means, it can damage the plant, leading to crop burning and bush fires. Regarding water, we find that some crops will thrive with a lot of it and ripen, such that flash flooding suits them, whereas for other crops the same amount will be a damaging flood that ruins the entire harvest. In a single crop, at a certain time the rain will be beneficial, causing ripening, whilst at another time, the rain will cause the ripened crop to collapse. Regarding water, formation is such that its boiling is dependent on heat. However, the dependency is such that water boils only according a certain proportioning of heat. Thus the system has both a specific formation and proportioning.

It is clear that the entities are themselves are subject to the system imposed upon them and they are not the initiators and organizers of the system. Had they been, they would be able to change the system at will, which is never the case. Consider that water that boils at a certain pressure with an exact amount of heat. Neither the governing law nor the amount are in the control of the water or the heat. Water cannot initiate boiling itself without heat, or at any heat, and the exact amount of heat does not change, as it is organized in a specific manner. Indeed, contemplating all the entities we sense establishes with certainty that they do not initiate and organize the system that they are subject to. Thus, there is indeed One that is not sensed by us directly, Who organized and originated the system for the entities. Allah (swt) said,

“And of His signs is the creation of the heavens and the earth, and the difference of your languages and colours. Behold! Herein indeed are signs for men of knowledge.” [Ar-Rum: 22].

Indeed the entities and the system that govern them are all initiated and originated by other than that which can be sensed. So how do those who claim that material reasons in a dialectic materialism, say so?

“Were they created from nothing, or are they themselves the Creators?” [TMQ At-Tur 52: 35].

Ibn Kathir commentated, أي: أوجدوا من غير موجد؟ أم هم أوجدوا أنفسهم؟ أي: لا هذا ولا هذا، بل الله هو الذي خلقهم وأنشأهم بعد أن لم يكونوا شيئا مذكورا “that is, did they come into being from a state of not being (ghayr mawjood)? Or did they being themselves into existence. Neither is true. Indeed Allah is the One Who created them and brought them into existence after they were nothing.” So in the language, it is said, خَلَقَ اللهُ الإِنْسَانَ: أَوْجَدَهُ مِنَ العَدَمِ، أَنْشَأَهُ، صَوَّرَهُ “Allah (swt) created the human-beings: He (swt) brought them into being from nothing, made them existent and fashioned them.”

Allah (swt) created Creation and Creation is unlike Him. He (swt) is greater than the universe and not dependent upon anything to sustain Himself. Allah (swt) is Azzalee, the Uncreated. In the language, it is said of Azzalee, الأَزَلِيُّ ما لا أَوّل له“The uncreated is that which has no primordial for it.” Thus, there is no organizer or initiator for the Azzalee. It is also said of Azzalee,  الخَالِدُ الدَّائِمُ الوُجُودِ لاَ بَدْءَ لَهُ “The always being in existence, with no origination for it.” Whilst Allah (swt) is Azzalee, existing without having been created, all sensed entities are created, subject to a system. The action of creation (khalq) is that of bringing into being from nothing. Entities that exist in this world do not have the capability of creating or originating any entity from nothing (إبداع من عدم), whether individually or collectively. Any individual entity is incapable of creating or originating from nothing. Even when entities complement each other collectively, they all remain incapable of creating or originating from nothing. So how do those who claim that the universe itself is eternal, say so?

Indeed, evidence for the existence of Allah (swt) is exhibited in every entity that is sensed. All entities are dependent (moHtaaj) on other entities, other than themselves. Their dependencies are in a precise formation (takayyuf) that is imposed upon the entities. Their dependencies are also found to have specific proportion (taqdeer), with specific amounts and magnitudes. So creation of the entities that we sense is a certainty, because their being dependent means that they are created by some other, not by themselves. Thus, all of the multitudes of entities that we sense are clear signs of the existence of Allah (swt), without Whom they could not come into being, whilst He (swt) is unlike all that He (swt) created.