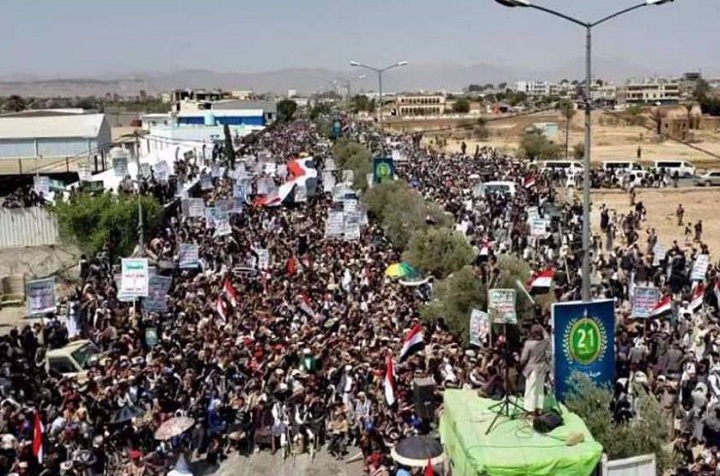 On Thursday night, demonstrations erupted in the governorate of Aden, which started from Crater and then moved to Khour Maksour, Mansoura and Sheikh Othman, accompanied by a number of governorates such as Hadramawt in Mukalla, Ghail Bawazeer, Shihr, Ad-Dis, Sayun, Al-Qatn, Tarim, and Al-Houta, the capital of Lahj governorate; to protest against the deterioration of electricity services that reach people only a few hours over the course of 24 hours, the water that barely reaches people, and the furious rise in the means of living as a result of the rise in the price of the dollar and hard currencies against the local currency, the riyal.

The President of the Transitional Council, who is seeking with all his power to thwart the Riyadh Agreement, and prevent the return of the ministers of the government of Mu’in Abdul Malik to carry out its work from the capital, Aden, after they were expelled from it by similar demonstrations, to make room for the appearance of the ministers of the Southern Transitional Council. And this is not surprising for the Transitional Council as it implements the role decreed for him by the Emirates and behind it the malice of the English. In return, the rulers of the Kingdom of Saud seek to implement the Riyadh Agreement in the service of their master America. And in the midst of this conflict, the two sides sacrifice the blood and suffering of the people of Yemen, may Allah destroy them, how they are deluded!

The remedies offered by Mu’in Abdul Malik and his government and the promises that Aidarous Al-Zubaidi and his Transitional Council are waving to the people of southern Yemen are unable to alleviate the suffering of the residents of the southern governorates. They are betting on the successive deposits coming from Riyadh, which have gone and will go down the drain like its alike without having a real effect, as it is more like instant local anaesthesia.

The demonstrators must be aware of the causes of their problems, and the nature of the international colonial conflict represented between America and Britain and their regional tools Saudi Arabia and the UAE, and in the hands of local tools, so that they demand radical and comprehensive solutions and not to be deceived for another 50 years.

The effective and radical solution to all the problems of the South, in particular, and Yemen in general, and the Islamic Ummah as a whole, is the application of Islam in all matters of political and economic life, internal policy, foreign policy and others by establishing the second Khilafah Rashidah (rightly guided Caliphate) on the method of Prophethood. This is what Hizb ut Tahrir works to establish, and has the adopted constitution emanating from the Islamic Shariah to treat crises, which is presented to the Ummah. And it calls on the people of Yemen to support it and work with it according to the Islamic methodology and on the method by which the Messenger of Allah (saw) established the Islamic state in Medina, since he worked to establish it while he was in Makkah Al-Mukarramah.

The Messenger of Allah (saw) said: «ثُمَّ تَكُونُ خِلَافَةٌ عَلَى مِنْهَاجِ النُّبُوَّةِ»“Then there will be Khilafah according to the method of Prophethood.” (Narrated by Ahmad on the authority of al-Nu’man ibn Bashir may Allah be pleased with him).