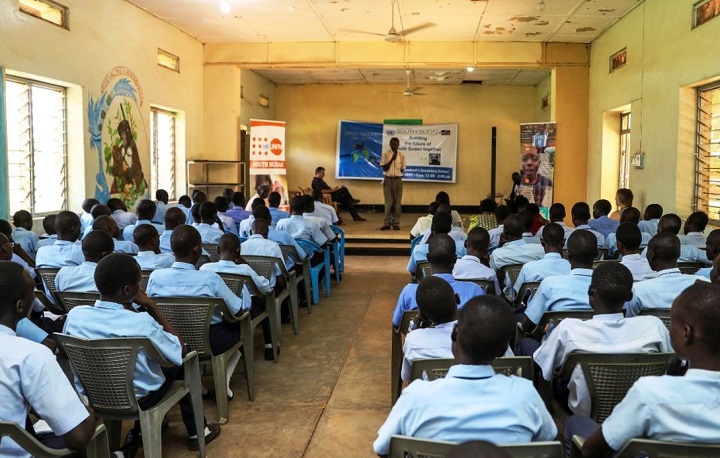 Today, the National Center for Curriculum and Educational Research in Al-Duwaim concluded, the procedural workshop to include children’s rights in educational curricula, which was organised by them in cooperation with the National Council for Child Welfare, the Association of Reporters for Children and UNESCO. Inaam Mohamed, Executive Director of the Reporters for Children Association, pointed at the great coordination that took place with the National Center for Curriculum and Educational Research in how the gradual doses of children’s rights are injected and included in the educational curricula. In addition to consultation in order to present an integrated plan for the goals and objectives that are included in the main document on children’s rights in the educational curricula. (SUNA, 9/18/2021)

Education is a great effort, that should be organized, programmed, and systematic in order to achieve absolutely defined goals. The government, since taking power, has been striving for a declared goal, which is to eliminate everything that is Islamic in education and to replace it with secularism and make it the supreme authority for the source of knowledge in the education system. The so-called al-Qarai did his best in his capacity as a director of curricula, and the secularization of knowledge plays the role of the hidden enemy against the people of the country, their values and beliefs, and works to undermine the Islamic faith and the nation’s identity and culture.

We, in the Women’s Section of the Media Office of Hizb ut Tahrir / Wilayah Sudan, explain to the people of Sudan the following facts:

The current Transitional Government did not show hypocrisy to you as the defunct Salvation Government did in its vision and purpose of the education system. It declared secularism and drafted a constitutional document that explicitly says to separate religion from life. As for subsidiary and technical issues, such as education policy, subjects taught, and teaching methods, they are the product of the government’s announced clear vision of the purpose of education. Therefore, it is not surprising that the rights of the child include those deceptive concepts that evade children from the restrictions of Islam in education and make them, as the Convention on the Rights of the Child, which the government has raised any reservation about its provisions, including the possibility of a child changing his religion, beside the child privacy clause, because of which parents will be implicated in prison if they order the child to pray or fast!

The government’s compliance with these schemes that corrupt the minds of our children, with the justifications of the conditions associated with receiving grants from international financial institutions, enables the West to implement its agenda to prevent the return of Islam as a system of life. It has harnessed UNESCO and UNICEF, which imposed a change in curricula and their inclusion in Western culture, not because of the development of education, but because of their own interests to maintain their hegemony over Muslim countries by secularizing their filthy civilization that is full of crises.

Since international organizations have supported education and supervised educational curricula, the educational process has become contaminated with liberal and secular values, and then as a result, intellectuals have become separated from their reality and their Ummah because they have lost the ideology and sincere Islamic political thought in solving problems and have adopted the secular thought that entrenches the separation of religion from political action that produces a metamorphosis of laws and regulations that do not address a crisis, but rather exacerbate the crisis.

O Muslims: Education was and still is the way to preserve the Islamic faith and culture in the hearts of the children of Muslims and the formation of Islamic personalities by building mentalities and dispositions based upon the ideology of Islam, because Islamic culture is the backbone of the Ummah’s existence and survival, so it builds a civilization and defines the goals and thus the Ummah makes its way in life distinct from the rest of the nations. However, if the Islamic culture is manipulated, the identity of the Ummah ends and its way of life vanishes, and it turns into a passive Ummah, instead of being an active Ummah in the international arena.

The success is in returning to Islam and its goal of education instead of filling the minds of children with the secularism of the Kafir West. Whoever seeks knowledge with the intention of worshiping Allah the Almighty and implementing His Law in a state that implements it and carries it to the world, the angels will spread their wings on him and protect him, and even the fish in the sea will seek forgiveness for him.