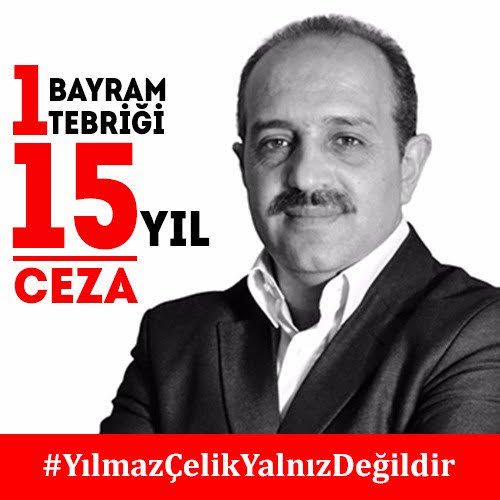 Yilmaz Celik member of Hizb ut Tahrir / Wilayah Turkey has been released. Yesterday we received the good news that our brother, Yilmaz Celik, a prominent member and former spokesman of Hizb ut Tahrir / Wilayah Turkey, has been released from jail. One year ago, he was arrested in the blessed month of Ramadan and was sentenced for 15 years of imprisonment by the Turkish judicial authorities. The Turkish Constitutional Court issued a verdict, a couple of weeks ago, that the previous court decisions taken against the members of the Party were incorrect and that Hizb ut Tahrir cannot be considered a terrorist organization after an appeal he has been released till the upcoming renewed court decision. We pray that he and all the members of the Party and the Muslims who are unjustly imprisoned are released as soon as possible.

Without going in too much details about the whereabouts of these particular court decisions, I would like to take this opportunity to highlight a vital issue which came into my mind when I heard the news and that’s the Tawakkul (trust and reliance) in Allah (swt).

A couple of times I had the honour to meet this particular brother. In one of our latest meetings a while ago, he spoke about the possibility of 2 times of 15 years of imprisonment. In other words, 30 years! I remember him saying “I’m in my late 40’s. How long does a man live? 60 or 65?” (referring to the hadith of the Prophet ﷺ concerning the average lifespan of a Muslim). In other words, they wanted to give him a sentence which exceeds his estimated lifetime. The future perspective for a man around his 50’s is captivity for the rest of his “young and healthy” live.

In prison, he met another member of the Party who was in the same prison facility who was sentenced for 7 and a half years. So, he made the logical remark that he will be years in prison after this other member is released. But he was not aware that he would be released much earlier than him, with the Help of Allah (swt).

This remarkable event which balances between a life behind bars and (high possibility of) a life as a free man is extraordinary and something to ponder about deeply. Things can unexpectedly turnaround for the good when everything on first sight indicates that it is covered in darkness, hopelessness without a way out. This is because Allah (swt) is able to do whatever He wants. He (swt) can change the situation of an individual or society whenever He (swt) wants even though it would go against all odds. The unexpected can come from an unexpected place. Allah (swt) is the Best Planner to Whom is the Best decision.

“And will provide for him from where he does not expect. And whoever places his trust in Allah, Sufficient is He for him, for Allah will surely accomplish His Purpose: For verily, Allah has appointed for all things a due proportion.” [65:2-3]

Tawakkul involves belief, trust and dependence on Allah (swt) in every action and beyond that He will take care of all our life affairs because without His permission nothing could happen or occur.

Tawakkul also means that we take the necessary measures and precaution in order to fulfil our obligation and responsibility towards our Creator and leave the outcome to Him.

This is even more important for the ones who carry the heavy responsibility and duty of working to convey and implement the Deen of Allah (swt) despite all hardship and difficulties which come along with it. Allah (swt) has promised that He will give His Help and Victory to the sincere believers.

This is easy for Allah (swt). The only requirement is that we uphold our duty and responsibility towards Allah (swt) with sincerity and continue with our work to establish al Khilafah ar Rashidah with Hizb ut Tahrir with the Help of Allah (swt).

“The Believers Are Only Those Who, When Allah Is Mentioned, Feel a Fear in Their Hearts and When His Verses Are Recited to Them, They Increase Their Faith; And They Put Their Trust In Their Lord.” [Surah Al-Anfal:2]