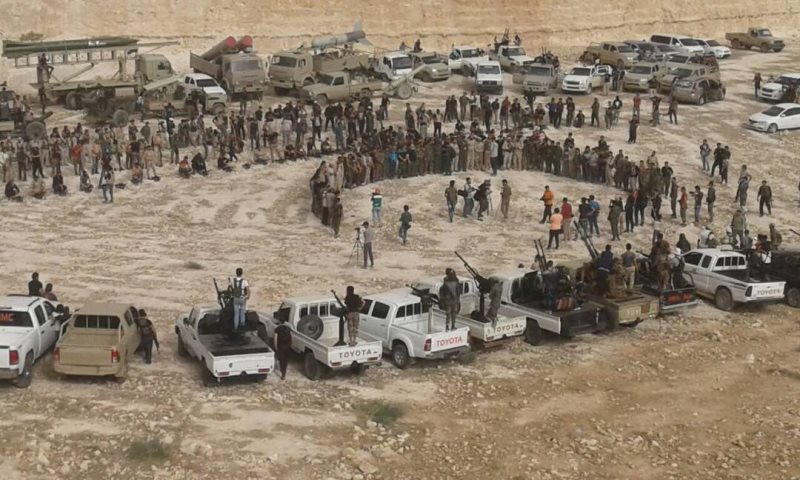 Barely a year passes without seeing new factional fighting; every time the forbidden blood is shed and cities and villages are violated without the factions bat an eyelid as if they went out for revolution to fight each other and not to overthrow the tyrant of Ash-Sham, whose areas became safe from the factions’ “revolution” more than ever, and overthrowing him is no longer a priority for those leaders who have chosen to be soldiers at their supporters.

We have warned before and we still warn of the consequences of this fighting; it serves only the tyrant of Ash-Sham and the international community behind him, that work to self-destroy the factions without a price from him, because the factions destroy themselves and the only loser is this orphan revolution whose wounds have increased. Allah Almighty says: وَلَا تَكُونُوا كَالَّتِي نَقَضَتْ غَزْلَهَا مِنْ بَعْدِ قُوَّةٍ أَنْكَاثًا… “And do not be like she who untwisted her spun thread after it was strong…” [An-Nahl: 92].

The abhorrent factional fighting is a clear indication of theirleaders’ disregard for the blood of our sons, and the lack of sense of responsibility towards a revolution that has sacrificed everything precious and valuable in order to get rid of this criminal regime. These leaders have become a burden on the revolution and its people and a poisonous dagger that stabs it instead of being a sword on the enemies. Also, the factional alignment and the victory of a faction over other factions became a priority for these leaders, whereas the Messenger of Allah ﷺ said. «…مَنْ قَاتَلَ تَحْتَ رَايَةٍ عِمِّيَّةٍ يَغْضَبُ لِعَصَبَةٍ، أَوْ يَدْعُو إِلَى عَصَبَةٍ، أَوْ يَنْصُرُ عَصَبَةً فَقُتِلَ: فَقِتْلَةٌ جَاهِلِيَّةٌ، وَمَنْ خَرَجَ عَلَى أُمَّتِي يَضْرِبُ بَرَّهَا وَفَاجِرَهَا وَلَا يَتَحَاشَى مِنْ مُؤْمِنِهَا وَلَا يَفِي لِذِي عَهْدٍ عَهْدَهُ فَلَيْسَ مِنِّي وَلَسْتُ مِنْهُ» “Whoever fights for a cause that is not clear, getting angry for the sake of tribalism, or advocating tribalism, and he is killed, then he has died a death of Jahiliyyah. And whosoever from my followers attacks my followers (indiscriminately) killing the righteous and the wicked of them, sparing not (even) those staunch in faith and fulfilling not his obligation towards them who have been given a pledge (of security), is not from me (i.e. is not my follower).” (Narrated by Muslim)

The sanctity of Muslim blood is known; Allah has promised whoever kills a believer deliberately of eternity in the Hellfire, anger, damnation and a great torment, the Almighty says: وَمَنْ يَقْتُلْ مُؤْمِنًا مُتَعَمِّدًا فَجَزَاؤُهُ جَهَنَّمُ خَالِدًا فِيهَا وَغَضِبَ اللَّهُ عَلَيْهِ وَلَعَنَهُ وَأَعَدَّ لَهُ عَذَابًا عَظِيمًا “But whoever kills a believer intentionally – his recompense is Hell, wherein he will abide eternally, and Allah has become angry with him and has cursed him and has prepared for him a great punishment” ]An-Nisa: 93[.

Abu Said Al-Khudri and Abu Huraira both reported from the Messenger of Allah ﷺ that he said: «لَوْ أَنَّ أَهْلَ السَّمَاءِ وَأَهْلَ الْأَرْضِ اشْتَرَكُوا فِي دَمِ مُؤْمِنٍ لَأَكَبَّهُمْ اللَّهُ فِي النَّارِ» “If the inhabitants of the heavens and the inhabitants of the earth all took part in shedding the blood of believer, then Allah would cast them (all) in the Fire.” (Narrated by At-Tirmidhi).

Thus, these absurd actions must be brought to an end before it is too late; all those involved in the fighting among Muslims must bear their responsibility, and the voice must be loud against all those who overturned the sacrifices of the people to change the tyrant. Also diligent and hard work must be done to correct the course of the revolution by adopting a clear political project that pleases Allah Almighty emanating from the doctrine of Islam and a conscious and sincere political leadership leading the ship towards safety.