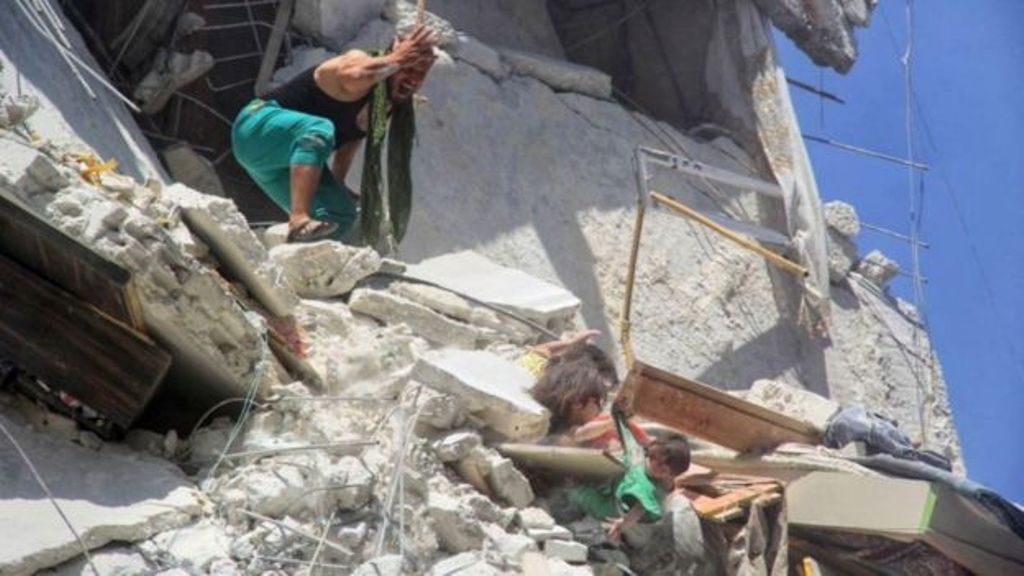 The photograph shows Amjad al-Abdullah in his bombed out building looking horrified at his two daughters below. Five-year-old Riham is holding her seven-month-old sister Tuqa by her t-shirt to prevent her from falling. Their mother was killed in the blast and Riham later died in hospital from her injuries. Innaa Lillahi wa innaa ilayhi rajioon!

The BBC website reported the story after the shocking photo spread widely on social media. It stated, “It has brought attention back to the war in Syria, where the Russian-backed government is trying to recapture Idlib from rebels and jihadists.

The UN said last week that more than 350 civilians had been killed and 330,000 forced to flee their homes since fighting in northern Syria escalated on 29 April.”

In an attempt to manage the Muslim anger at the sight of such photographs and divert any sympathy for the innocent victims, the BBC gives justification for the horrific atrocities of the al-Assad Syrian regime, still recognising their “right” to recapture Syria from the rebels whom they label jihadists and terrorists. Their reporting cares nothing for the suffering of the Syrian people at the hands of the tyrant Bashar and his family, before and after the people’s uprising. The mainstream media and Western government narrative has always been to legitimise the regime, while wringing their hands of their hands of the blood it spilled. Hence blaming the Russians and the rebels, diverting attention from the dictator and the colonial power that employed and supports him.

The Syrian regime is an American created and supported enterprise, loyally serving US interests and conspiracies against its own people from al-Assad the father until today, despite the pretence of the Americans otherwise.

Furthermore, it is the American government that instructed all of its agents in the region, and lured the Russian military in, to defend the nearly defeated al-Assad at all costs, including the annihilation of citizens, young and old.

When Haftar kills in Libya, the Houthi militia massacres in Yemen, or al-Burhan slaughters protesters in Sudan, blame is rightly directed at the leaders who ordered the killers. Except that in the case of Muslim leaders such as these, there are colonial powers ordering and supporting them to give these orders.

The world today is controlled by a greedy capitalist class who colonises the world for its own benefit, willing to destroy most of humanity for its selfish ends. The dictators and tyrants of today are mere temporary employees of the colonialist Western governments, so while they deserve the blame and anger of the people, the root of the weed must not be ignored.