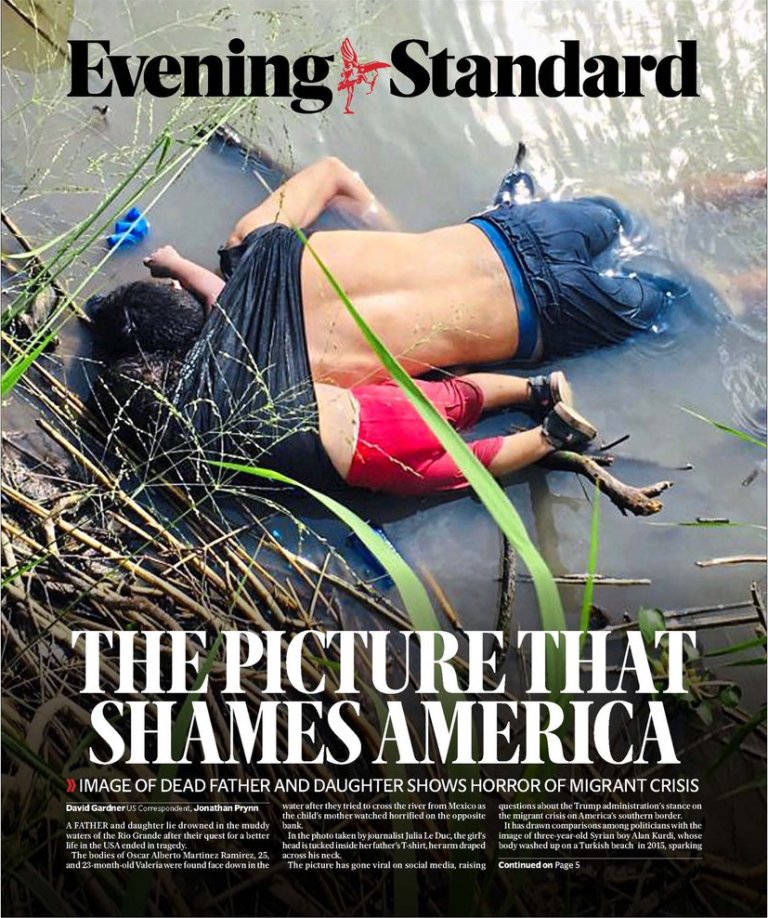 On 26th June, the London Evening Standard devoted its front page to a picture of a drowned father and his two year old daughter with the title “the picture that shames America.” The article wrote about how this young family was tragically destroyed attempting to enter the USA in search of the American dream, to escape their poverty stricken lives in El-Salvador.

As the American government is currently intent on preventing migrants from South America from entering the country, people are taking greater risks, such as swimming fast moving rivers and crossing hostile deserts, to get in before the wall goes up.

America is truly shamed by their inhuman nationalistic policies that divide humankind according to superficial nationalities and race. Equally shameful is the selfish ideology that ringfences America’s wealth, much of which is gained through aggressive foreign policies, theft and exploitation, for a privileged few who loathe the very idea of sharing it with the rest of the world.

America is the colonialist nation that keeps southern American nations like El-Salvador impoverished for its own benefit, such that people are desperate to leave and take enormous risks for the hope of a better life.

The whole world, especially the Muslims, should be publicly shaming the American government and its apologists who promote its colonialism and secular ideology overseas, for they are truly depraved, not worthy of consideration as a model for how to take care of the people’s affairs.

Islam, on the other hand, has a clear legislative basis with laws that do not serve only the wealthy elite, but bring wealth to the poor and provide genuine opportunities for everyone. Muslims have a rich history of taking wealth into the newly conquered lands, unlike the American colonialists who conquer only to exploit and pillage the land. Islam does not divide humanity into ethnic minorities and belittle the plight of foreign migrants. Muslims have an honourable history of welcoming migrants and asylum seekers, not preventing them from entering nor imprisoning them once they do get through.

Truly it is the sick secular ideology that America champions as the “leader of the free world” that is the cause of such shame and humiliation for the American people, and it is high time that they see it for the folly that it is and consider Islam as the genuine and true way of life to elevate all of humankind, as intended by the creator of humanity, Allah the Lord of the worlds.