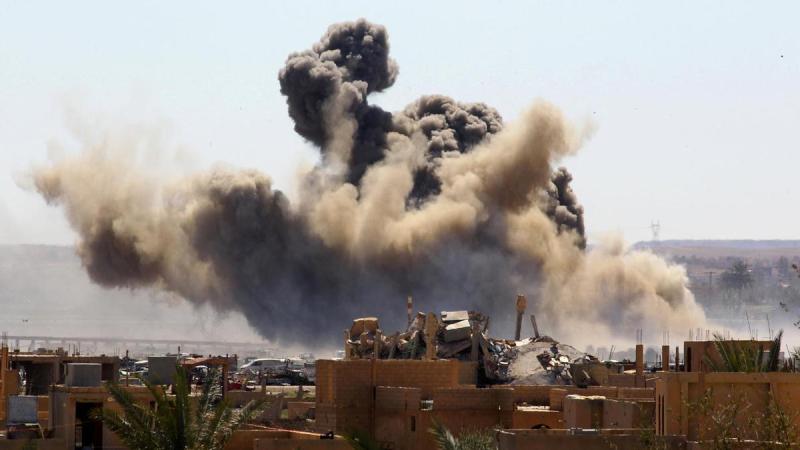 The international coalition forces with the Syrian Democratic Forces (SDF) committed a horrific massacre in Baghouz, the last remaining enclave of ISIS, before the SDF officially entered the Baghouz. The town of Baghouz is located in the north-west of the city of Al-Bukamal on the north-eastern bank of the Euphrates River, where the largest number of ISIS fighters who refused to or could not escape have been assembled. The plan was not only to exterminate the elements of the organization but to exterminate all unarmed civilians, women, children and the elderly, by warplane and burn them with phosphorus in a genocide and brutal massacres.

A new massacre is added to the record of massacres committed by the international coalition forces against Muslims in the world in general and in the land of Ash-Sham in particular, which resulted in thousands of civilian martyrs; Earlier, al-Jinah massacre was committed on 16/3/2017, which targeted Omar ibn al-Khattab Mosque after the Ish’aa prayer in the village of al-Jinah near Alotarb, killing more than 50 Muslim worshippers. In a report, the Syrian Network for Human Rights said that the international coalition against ISIS in Syria, since its intervention in the country, has killed more than 3,000 civilians, including over 900 children.

The planes of this crusader alliance launch from the Turkish territory, and the Turkish regime participates in it together with other ruling regimes in the Islamic countries. The fight against what they call terrorism is only a cover for the massacres committed by the alliance against the Muslims, in an attempt to justify the crime and silence anyone who thinks of merely denouncing this crime, which exceeded all limits and, in an attempt, to cover the nakedness of its crime and the fact of its hostility to Islam and Muslims.

These massacres which are committed against the Muslims will not be terminated except by the coming Khilafah (Caliphate) State, which in the past championed the scream of a Muslim woman shouting “O Mua’tasim” and it will again bring victory for all Muslims in this world, rather for all of its citizens, the Messenger of Allah ﷺ said:  «إِنَّمَا الْإِمَامُ جُنَّةٌ يُقَاتَلُ مِنْ وَرَائِهِ وَيُتَّقَى بِهِ»“A commander (of the Muslims) is a shield for them. They fight behind him and they are protected by him.” We have nothing but to hold firm to the strong rope of Allah and work hard with the sincere workers to establish the Khilafah Rashidah (righteous Caliphate), which the Messenger of Allah ﷺ gave us the glad tiding of its return, for it is by Allah, the glory of this world and the success of the Hereafter. Allah (swt) says:

“Whoever desires honor [through power] – then to Allah belongs all honor. To Him ascends good speech, and righteous work raises it. But they who plot evil deeds will have a severe punishment, and the plotting of those – it will perish.”