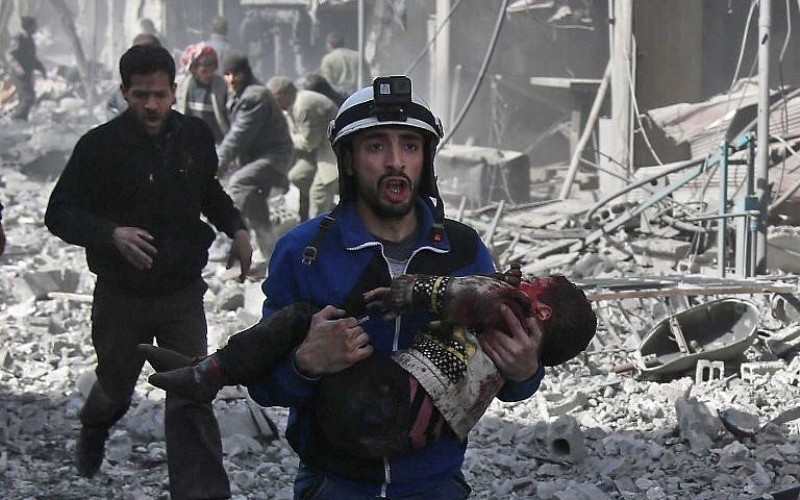 The brutal war in Syria against civilians entered its ninth year on March 15. More than half a million people have died, according to international reports, and the Syrian Observatory for Human Rights has documented the deaths of up to 19800 children since 2011. An estimated 8.6 million children are in dire need of assistance, and now more than 6 million children are displaced or living as refugees, and some 2.5 million of whom are out of school. More than 3 million children are at risk from landmines, with about 40% of those killed by mines being children.

And here is the United Nations and its other humanitarian organizations that continue to raise the alarm and warn of the dangers of this ongoing war, especially on children. On March 11, the United Nations International Emergency Fund (UNICEF) stated, “In 2018 alone, 1,106 children were killed in the fighting – the highest ever number of children killed in a single year since the start of the war”. A similar statement was issued at the beginning of 2018 by the UNICEF Representative in Syria entitled, “A bloody start to a new year in Syria; over 30 children killed in the first two weeks of 2018”. Earlier reports have also shown that children are increasingly bearing the brunt of the war in Syria, accounting for about 23% of civilian casualties in 2016. Between 2016 and 2018, the United Nations recorded the death of about 2,500 children. As the UNICEF Regional Director for the Middle East and North Africa said earlier, “It is a war on children, thousands of children have been killed and are still being killed.”

Increasing figures are not new or even strange in the face of this relentless and brutal war against all civilians, especially children, as some see it as inevitable as in other wars.

Eight years on, and the same reports and repeated warnings continue to be issued by these organizations, with changing figures every year at very alarming high levels as the number of child deaths continues to increase …

Figures used for financial bids, as the United Nations issued the following statement a few days before the Brussels Conference of Donors to support the future of Syria and the region, which was held on Thursday, 14th March, where contributions were lower than expected, according to the United Nations representative who said, “We requested $ 9 billion but the pledges amount only $6 billion”. The United Nations has set the financial needs for 2019 at 5.5 billion dollars to help more than 5.6 million Syrian refugees outside their country, while it estimated the need of 3.3 billion dollars for internally displaced people!!

Huge financial figures increase as death figures increase continuously, posing the question: Are they spent on needy people and refugees as planned?! Have they changed the situation of children who die from the international barbaric war machine?!

Colonial countries that plunder the wealth and aim to starve people, and they are far from the characters of humanity, which they brag about, provide huge amounts of money to organizations that are tools for these great colonial powers to implement their policies in the world!! They kill our children and then cry over them and shed crocodile tears to plunder and continue to consolidate their control, rather their hegemony over the Islamic countries, but over the world as a whole.

As Falsehood has power, the Truth has powers and conquests, safe and security will spread and the children of Muslims will enjoy ease and reassurance and will live their childhood under the justice of Islam. And that is not far, for it is the promise of the Lord of the Worlds that the best outcome is for the righteous.

O Muslims! Know that lifting the suffering of all humanity and not just children will only be by giving a legitimate allegiance (Bayah) to the Khaleefah to rule by what Allah has revealed and by the resumption of the Islamic way life through the second Khilafah Rashidah (righteous Caliphate) on the method of the Prophethood, for it will withhold the hands of the abusers in our security and safety and will stop our suffering and the suffering of our children, heal our hearts, restore joy to our hearts and bring back with it our honor and prestige among the nations, so we do not wait for their money, which will be for them a source of regret as Allah (swt) says: