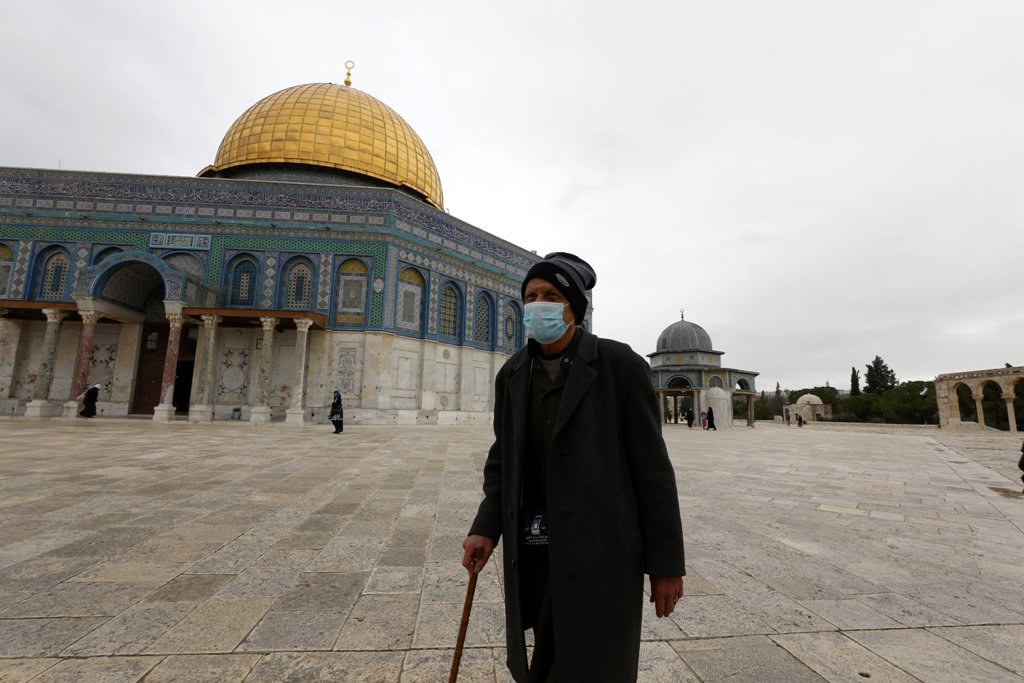 The Palestinian Authority Mobilised its Shabiha (Thugs) to Arrest and Suppress Worshipers, Close Down Masajid and Prevent Friday Prayers

in a Blatant War Against the Houses of Allah, His Supporters and His Rituals

In a open war against the people of Palestine and their Deen, the Palestinian Authority (PA) mobilized its forces and deployed its Shabiha (thugs) and security apparatus to prevent holding the Friday prayers. It launched a campaign of pre-emptive nighttime arrests of the Dawah carriers in Qalqilya, Tulkarm and Bethlehem, following calls to open the Masajid and hold Friday prayers. It arrested some preachers and teachers, and then in the morning, it began to close down Masajid and transform some of them into security barracks, and was not satisfied with that, but rather it barged into them with batons and fired teargas canisters at people who refused to submit to their injustice and tyranny and held Friday prayers in Masajid and squares, in an attempt to discourage them from their prayers or punish them for holding them. As it also arrested – until the time of preparing this statement – many worshipers after prayer.

The PA is committing these crimes in various areas of the West Bank from the north to the south, in a frenzied campaign to prevent the establishment of one of Allah’s rituals, which is the Friday prayer, in a clear war against Islam, the Houses of Allah and the people of Palestine. After it has exhausted many of its energies in destroying the economy, education, and making people go down on their knees and starving them under the pretext of confronting the Coronavirus pandemic, which remained confined according to the authority in schools and mosques after the opening of banks, markets and institutions!

The people of the Blessed Land have proven by their strong, blessed movement today, and their prayers in many Masajid and squares, their protectiveness over their Deen and their eagerness to defend their Masajid and rituals. And why wouldn’t they, when they are the people of Ribat (protection of Islam) who were praised by the Messenger of Allah ﷺ, they are the ones who stand up to the Jewish entity in Masjid Al-Aqsa and Al-Ibrahimi Masjid is in Al-Khalil (Hebron) at all times, And why wouldn’t they, when they are protective over their Deen and their sanctities, they erupt like a volcano against everyone who tries to desecreate them, as what took place in the Masjid and shrine of the Prophet Moses, peace be upon him, they went to purify it from the abomination of the Authority, its financiers, their malicious associations, and their obsene scum. They honored it with prayer and remembrance of Allah (swt), and headed to it today from all cities and regions and performed the Friday prayer there.

The movement of the people of Palestine is a strong one with blessed determination, and its impact angered the Palestinian Authority and those behind it, which prompted the frenzied reaction of the PA and its repressive apparatus. Its barbaric move and its great mobilization is evidence of the size and impact of that move; that PA whose role has become to fight Islam, the Masajid of Allah and the Dawah carriers.

This blessed move by the people of Palestine needs more strength and be a challenge to the criminal PA gang, to open the Masajid and hold group prayers against their will, so that their plans and masters’ plans fail to turn the Masajid into deserted places or a hotbed of immorality and vice.

With this arrogance, the PA has chosen a difficult position, and entered into a challenge that it is not worthy of, when it overlooked that prayer and the Masajid are a vital issue for the believers and the people of Palestine; and that it will not get by its blatant and rash measures except for shame in this world and great torment in the Hereafter. As for Friday and congregational prayers and the opening of Masajid, let the PA, its servants and those behind it know that we and all the sincere people of Palestine, with the help of Allah (swt), will strive to open them and restore them as they were, full of its people and the remembrance of Allah (swt) and the establishment of prayer and ordering good and forbidding evil and exposing traitors and agents, and a starting point for calling the Ummah to establish its state and rule by the Allah’s laws, whether people want it or not.

In conclusion, the Palestinian Authority has persisted in its oppression and tyranny, and this is a terrible and dire matter, these attacks and arrests of the worshipers of the people of Palestine are nothing but persistance in injustice and tyranny, which will be the fuel that ignites the Ummah’s move against the oppressors. The day will come when the PA will not find anyone to defend it or be merciful with it, and if it finds now someone who will protect it from the Ummah’s anger, it will not find someone to protect it from the anger and wrath of Allah (swt) sooner or later. Members of the PA who carry out its orders to fight the Deen of Allah and attack His Houses will not find anyone who defends them before the Mighty Avenger (swt), and the Palestinian Authority will dissociate from them as Allah (swt) says: إِذْ تَبَرَّأَ الَّذِينَ اتُّبِعُوا مِنَ الَّذِينَ اتَّبَعُوا وَرَأَوُا الْعَذَابَ وَتَقَطَّعَتْ بِهِمُ الْأَسْبَابُ * وَقَالَ الَّذِينَ اتَّبَعُوا لَوْ أَنَّ لَنَا كَرَّةً فَنَتَبَرَّأَ مِنْهُمْ كَمَا تَبَرَّءُوا مِنَّا كَذَٰلِكَ يُرِيهِمُ اللَّهُ أَعْمَالَهُمْ حَسَرَاتٍ عَلَيْهِمْ وَمَا هُمْ بِخَارِجِينَ مِنَ النَّارِ “[And they should consider that] when those who have been followed disassociate themselves from those who followed [them], and they [all] see the punishment, and cut off from them are the ties [of relationship] * Those who followed will say, “If only we had another turn [at worldly life] so we could disassociate ourselves from them as they have disassociated themselves from us.” Thus will Allah show them their deeds as regrets upon them. And they are never to emerge from the Fire” [166-167].

And if they do not repent to Allah (swt) in their war against His rituals and houses, their fate is from the fate of the Palestinian Authority; shame in this world and torment in the Hereafter, which is more severe and lasting.

“And who are more unjust than those who prevent the name of Allah from being mentioned in His mosques and strive toward their destruction. It is not for them to enter them except in fear. For them in this world is disgrace, and they will have in the Hereafter a great punishment” [Al-Baqara: 114].