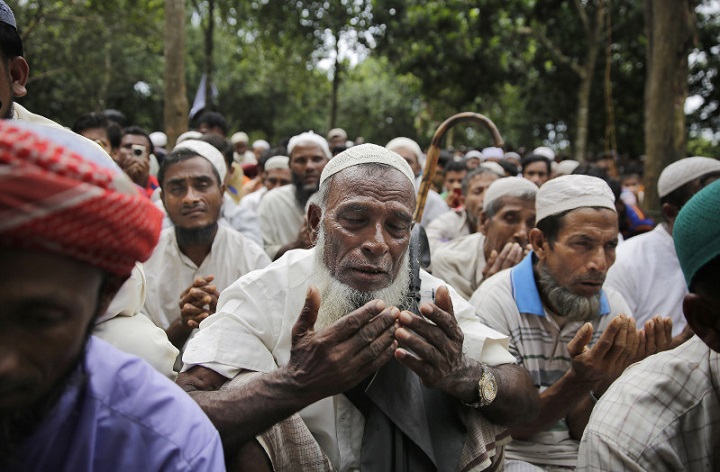 Tuesday the 23rd of August 2022 marks the anniversary of the persecution of the Myanmar Muslims that began in 2017. For the last 5 years a mass exodus of Muslim families have fled former Burma, many of them children. The Myanmar Muslims are recognised as being the largest “stateless” group of people on the planet.

Since the start of the genocidal campaign under the leadership of so called “human rights champion” Aung San Suu Kyi thousands of Myanmar Muslims have lived in fear of their lives. The murder and expulsion of some of the world’s most vulnerable and poor people was conducted under the partial Democracy System that was the governmental structure at that time.

The 2021 military coup that removed the female leader and replaced her with the current military Junta has not changed the suffering of the Muslim population. This political example allows us to question the repeated assumption that having a female leader is better for human rights circumstances. The credibility of this false idea is given further support when we look at the horrific treatment given to the refugees who sought help from the female leader of neighbouring Bangladesh, Sheikh Hasina.

The UNHCR have recorded over 700.000 displaced Myanmar citizens. Many of them inhabit the world’s largest concentration camp in Bangladesh known as Cox Bazar. In the most squalid and dangerous conditions, the desperate Muslim men women and children are 100% reliant upon external aid for survival. However there is insufficient resources arriving into the camps that grow in number every week.

While international support has is crucial in delivering lifesaving protection and assistance services for Rohingya refugees, funding is well short of needs.

The latest UNHCR 2022 response plan, which seeks over $881 million for more than 1.4 million people, including Rohingya refugees and more than half a million most affected host communities, is only 49 per cent funded, with $426.2 million received, according to UNHCR.

“The international community must do more to ensure that the Rohingya do not continue to languish in displacement,” stressed Ms. Mantoo, asking that efforts be “redoubled” for increased political dialogue and diplomatic engagement to create conditions for a voluntary, safe, dignified and return sustainable return.

What Ms Mantoo fails to understand and address is that voluntary return has no meaning when the lives and futures of the Muslims have no stability and everything they have known has been completely destroyed.

The UNHCR spokesperson Shabia Mantoo told journalists at a regular press briefing in Geneva on Tuesday that “The latest exodus from Myanmar is now officially defined as being a protracted situation, with decreased funding, they face many challenges in their daily lives,” Ms. Mantoo, cited multiple humanitarian assessment surveys that found proper nutrition, shelter materials, sanitation facilities and livelihood opportunities to be among the most commonly unmet needs. Some have resorted to dangerous boat journeys to seek a better future”.

From these comments we can see how the Muslims of Myanmar have jumps out of the flames of their burning homes and into the fire of inhumane liberal democratic negligence.

The Bangladesh government has been pushing for Rohingya Muslims to return to Myanmar. Thousands of refugees have been moved to a remote island called Bhasan Char, which refugees describe as an “island prison”. Neighbouring India had promised the refugees housing and assistance and then the government refused to honour their words and denied any assistance.

The terrifying instability of having zero citizenship and living with the threat of being thrown out of Bangladesh at any moment means that thousands of this Ummah exist in a state of static limbo. It is not possible for anyone to get a job and worse still, no child is allowed to enter the schooling system. Makeshift lessons take place for some of the youth, but without trained teachers, equipment and no formal curriculum to follow, the education is substandard and does not meet the development needs the children.

On the 24th of August 2022 the BBC reported on the story of 4-year-old Yasmin who was born in Cox Bazaar refugee camp, so it has been the only life she has ever known. Her parents say they would rather be killed than return to Bangladesh.

The number of refugees in camps in Bangladesh has grown to close to one million. Half of them are children.

The result of this gross human rights abuse is that an entire generation of children have lost their educational opportunities. The impact on their lives is irreversible.

The punishment of destroying the future of an entire people is executed when you fail to educate the young people of that nation. This is a deliberate organised plan of action to disable Muslims from knowing their power and history. The Khilafah and the laws of Islam forbid the subjugation of Muslims and hold their lives in the highest state of importance.

The victim status of Muslims is kept alive using these poverty measures so the Ummah never revive out of their mindset of despair. The mentality of survival and not thriving is perpetuated.

In March 2022 Bangladesh authorities actually threatened the Rohingya refugees for setting up schooling structures. There was an active ban in place for schools in the camps.

These are clear signs that the governments of the Muslims are in collusion with the enemies of Islam to endure harmful measures exist to punish Muslims for allegiance to their Deen!

The Bangladesh government’s alignment with the sick forbidden principles of nationalism have separated this Ummah so we no longer have any structures in place to provide real solutions and help to the needy and abused.

Allah (swt) will surely account the collaborators with the Haram ideas;

Abdullah bin Abi, a leader of the Medinan hypocrites was a loyal nationalist, and constantly instigated the people of Medina, in favour of nationalism, saying: “A few beggars have come to our country from other lands and have become bullies. They are like dogs which are fattened to assault us.”

He told the Medinans: “It is wrong of you to have made those foreigners partners in your wealth and country. If you stop helping them today, they will flee.”

In answer to these futile words, the following verse was revealed:

“They it is who say: Do not spend upon those who are with the Apostle of God until they break up. And God’s are the treasures of the heavens and the earth, but the hypocrites do not understand. They say: If we return to Medina, the mighty will surely drive out the meaner there from; and to God belongs the might and to His apostate and to the believers but the hypocrites do not know.” [63:7-8]

The Khilafah (Caliphate) would actively implement a policy of citizenship for all.

There has never been the notion if animalistic refugee camps in the entire history of the Islamic state, that is why any oppressed people of the world would seek help from the Muslim system.

We must rescue these lost children of the world by one true means only. The re-establishment of the Khilafah is the most urgent need of our time. There must be an accelerated effort of all Muslims to take action to resume this obligation, least Allah (swt) account us for all of those who are at loss due to its absence.