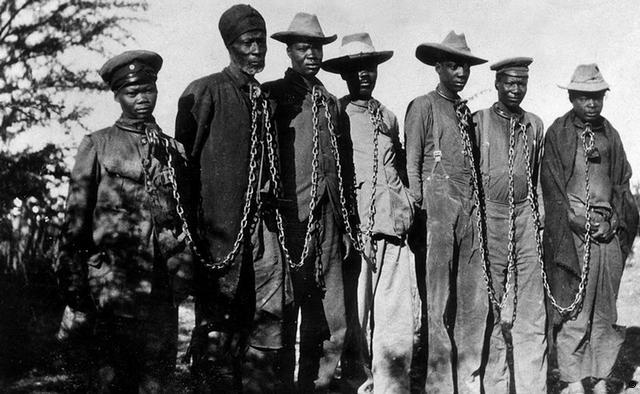 Germany was slow to become a colonial nation, and despite finally acquiring many colonies in Africa, these failed to make a net profit over the few decades that it was able to hold onto them. Nevertheless, Germany managed, like those who came to Africa before it, to soak it hands in the blood of Africa’s people.

Namibia in South-West Africa was the only colony that Germany considered of real value, and that is where the first of many genocides of the 20th century was committed. Two of the biggest tribes, the Herero and the Nama, rebelled against German colonial rule after having their lands and cattle stolen, and General Lothar von Trotha was sent to crush them. He defeated the Herero in the Battle of Waterberg in August 1904, and then drove the whole tribe into the Desert of Omaheke where he poisoned the water wells so that the whole tribe would die. About 65,000 of the Herero tribe were exterminated from an initial population of 80,000, and 10,000 of the Nama tribe were exterminated from an initial population of 20,000.

The survivors were placed into concentration camps to die slowly of hunger and maltreatment. German scientists performed experiments on them in the concentrations camps: Dr. Bofinger worked on Herero suffering from the disease scurvy, but he didn’t try to cure them; rather, he injected them with arsenic and opium and then cut-up their bodies to research the effects of these substances. Eugene Fischer, a German anthropologist, conducted experiments on race to support the idea that Germans were a master race, and this laid the foundations for Hitler’s racial philosophy. Even the dead were not spared, and 300 skulls were sent to Germany for experimentation.

Germany did this without shame, and General Lothar von Trotha wrote proudly about his policies of extermination. He explained how gross terrorism should be used: “African tribes … will only succumb to violent force. It has been and remains my policy to exercise this violence with gross terrorism and even with cruelty. I annihilate the African tribes by floods of money and floods of blood. It is only by such sowings that something new will arise that will be there to stay.” After crushing the Herero, von Trotha issued a proclamation of death for the survivors: “The Herero nation must leave the country. If it will not do so I shall compel it by force. Inside German territory every Herero tribesman, armed or unarmed, with or without cattle, will be shot. No women and children will be allowed in the territory: they will be driven back to their people or fired on. These are the last words to the Herero nation from me, the great General of the mighty German Emperor.”

General Lothar von Trotha’s wickedness was supported by his superiors and implemented without mercy by his troops on the ground. Major Stuhlmann described a scene from the battle of Ohamakari where he wrote of a wounded child lying next to his cannon: ” … the little worm had flung his arm around the wheel of the cannon, which had possibly destroyed his other family members … we had been explicitly told beforehand, that this dealt with the extermination of a whole tribe, nothing living was to be spared.” Hugo Fraser described the cruelty of a concentration camp in Swakopmund state: “I personally saw six women murdered by German soldiers. They were ripped open with bayonets. I saw the bodies. I was there for six months, and the Hereros died daily in large numbers as a result of exhaustion, ill-treatment and exposure.”

The killing in these camps continued without any mercy for three years, and the same tactics were employed throughout Africa. In German East Africa, extermination of innocents was the response to the Maji Maji rebellion, where famine was used deliberately to get rid of 100,000 to 300,000 people. In 1905 one of the leaders of German troops in that colony, Captain Wangenheim, wrote: “Only hunger and want can bring about a final submission. Military actions alone will remain more or less a drop in the ocean.”

The Germans were as ruthless as the French in using the ‘Enlightenment’ philosophy of ‘total war’ to crush whole populations, and they each took delight in chopping the heads off their victims. However, the Germans took this to a horrible new level by using the heads for flawed scientific experiments to support the view that they were superior to the people they murdered. This wicked philosophy and the use of concentration camps to collect whole tribes for destruction, would be of service to the Germans 40 years later in Hitler’s Nazi concentration camps.