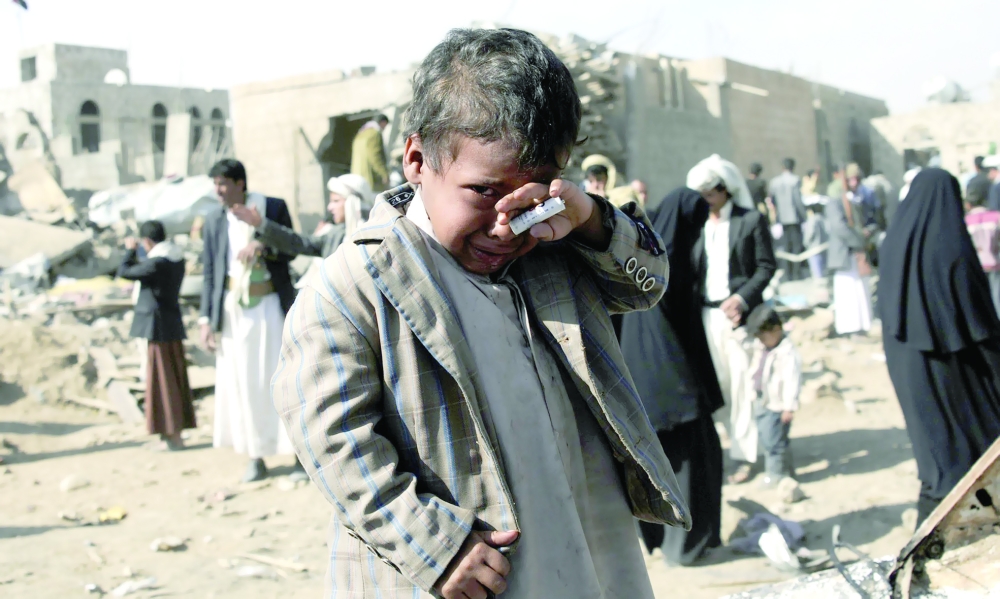 On the 7th of August, UNICEF resident representative in Yemen, Meritxell Relano stated that 201 children have been killed in the ongoing war in Yemen since the beginning of 2017. She also reported that 347 children had been maimed and 377 boys recruited in the ongoing fighting in the country this year. Her statements came a few days after an airstrike hit a family’s home in the Yemeni northern province of Saada, killing 12 civilians, including 4 girls and 2 boys aged between 2 and 14 years, and which was blamed on the Saudi-led coalition. Around 4500 children have been killed or injured in this brutal senseless 3 year conflict in Yemen between a coalition of Arab states led by Saudi Arabia supporting the government of President Abd-Rabbu Mansour Hadi and the Iranian-backed Houthi rebels. Alongside this, starvation and disease, to which the young are most susceptible is ravaging the country, also leading to thousands of deaths. This has been caused by the collapse of the country’s healthcare, water and sanitation systems and the bombing and blockade of Yemen’s ports and airspace by the Saudi-led coalition which has prevented food, medicines, and other humanitarian aid reaching its people. Of the 425,000 suspected cases of cholera across Yemen, around half are suspected to be children, and of the 2000 who have died from this preventable disease, a quarter have been children, and according to UNICEF, every 10 minutes a child under 5 in Yemen dies from preventable causes. On the 1st of August, the charity Save the Children stated that more than 1 million malnourished children under 5 in Yemen are at risk of being infected by cholera, in what has been described as the worst cholera epidemic in history, occurring in a country where less than half of its medical facilities are functioning due to the war.

Comment:
War, starvation and disease are annihilating the children of Yemen. However, despite these staggering statistics of human suffering, the world watches on doing nothing to end this humanitarian catastrophe, while the bombing of children and babies, and the blockade of life-saving humanitarian aid continues. Earlier this month, Auke Lootsma, the country director of the UN Development Programme stated that the coalition was obstructing deliveries of fuel for UN planes engaged in humanitarian work in the country. He said that the situation in Yemen is like a bus, “racing towards the edge of a cliff” and instead of hitting the brakes, “the one controlling the direction of the bus keeps going and pushes the accelerator.” In July, the UN also said that up to 1 million doses of cholera vaccine may have to be diverted elsewhere due to logistical difficulties caused by the Saudi-led siege on the country. Regardless of all of this, the UN lacks the backbone to even place Saudi Arabia on its blacklist of states that violate the rights of children, having initially taken it off the list due to threats from the regime to withdraw funding from several UN programmes. What moral worth can such UN initiatives ever have when they are being financed in exchange for silence over the most grievous crimes against children?

There is no state today or international body that has the moral conscience, or the political will to bring this bloody conflict to an end. Rather the international players of today are profiteering from the bloodshed and misery of Yemen’s children in typical capitalist form. In May, the Trump administration signed a $110 billion arms deal with Saudi Arabia, and throughout this 3 year war, the UK government has authorized hundreds of millions of pounds of military exports to the regime, including £263 million worth of combat aircraft components and £4 million of bombs and missiles just in the 6 months following the deadly airstrike that killed 140 mourners attending a funeral in Yemen (according to figures compiled by the Campaign Against Arms Trade).

What is happening in Yemen today is a stain on the conscience of humanity. Moreover, it is a hideous crime against our Ummah in Yemen and their children, and a hideous crime in our Deen of Islam, for Allah (swt) said,

“And whosoever kills a believer intentionally, his recompense is Hell, to abide therein forever, and the Wrath of Allah is upon him, and His curse; prepared for him is a grievous torment.”
[Al-Nisa: 93]

And the Messenger of Allah (saw) said:

“Verily the destruction of the Ka’bah, rock by rock, is lighter to Allah than the spilling of the blood of a Muslim”.

Surely it is only emphasizes further, the urgent need to re-establish the Khilafah Rashidah (Righteous Caliphate) based upon the method of the Prophethood which will use its armies to protect and save the children of this Ummah from their oppressors rather than to slaughter them in the service of the enemies of Islam!