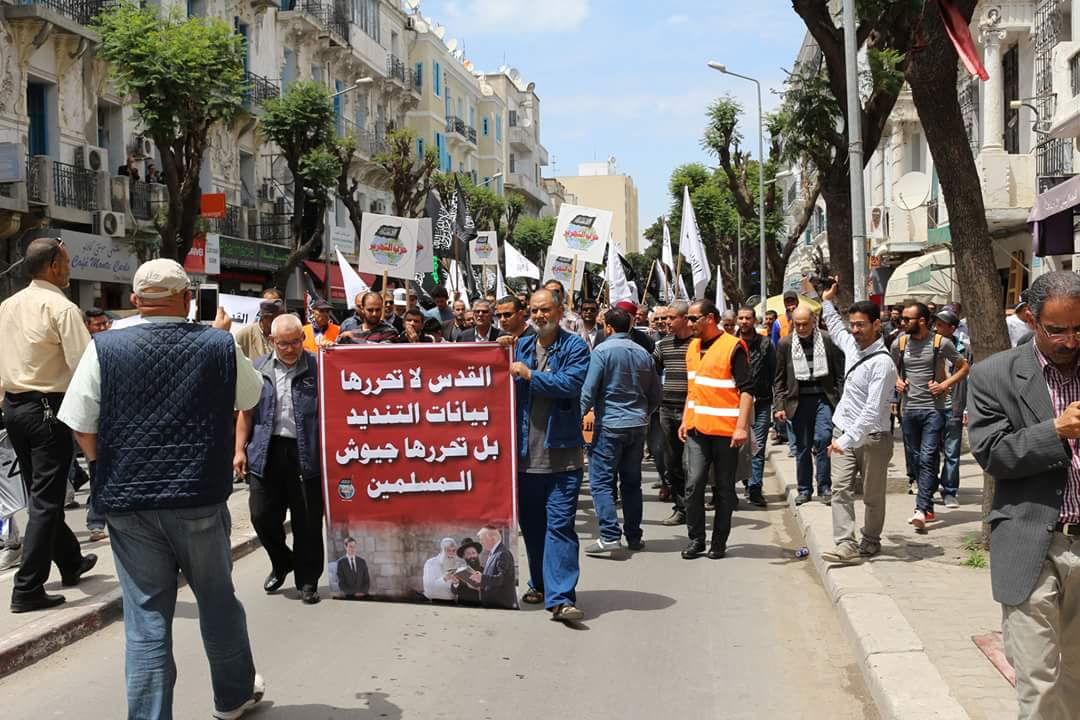 On Friday, 18/5/2018, Hizb ut Tahrir in Tunisia organized a march in support of Al-Aqsa and the Blessed Land of Palestine. Mr. Ahmed Al-Mayi, a member of the locality of Tunisia, delivered a speech in the crowds after Friday prayers in front of Al Fath Mosque where he emphasized the status of the Blessed Land of Palestine and Al-Aqsa to the sons of the Ummah in general and the people of Tunisia in particular, rejecting the rulers’ shameful, humiliating supporting positions for the Jewish entity.
The participants raised the banners (Rayat) and the flags (Al-Liwaa) and slogans that called for the victory of Al-Aqsa and the rejection of the humiliating West deals.
When the crowds went to the center of the capital as scheduled, they were confronted with large numbers of security forces, which led to the abandonment of the march to avoid any clash between the people of the one Ummah.
Yes, the solution for the issue of the Blessed Land of Palestine is a single solution, which is not a proposal of the Western countries or Trump, nor the Security Council or the UN, but must be derived from the Ummah’s Deen and its civilization. The Blessed Land of Palestine will not be liberated except by armies that are led by a single Amir to permanently get rid of the occupation and grant victory for the captive Al-Aqsa. Neither negotiations nor peace, agreements or others can liberate an inch from the Blessed Land of Palestine. Any solution away from this genuine solution is a waste and squander of the issue of the Blessed Land of Palestine.
Media Office of Hizb ut Tahrir in Wilayah Tunisia
3 Ramadan 1439 – Saturday, 19 May 2018
Press News
No: 22/1439
(Translated)