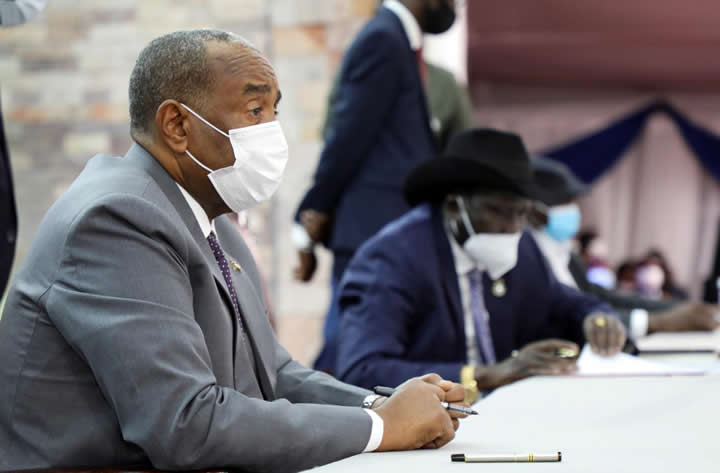 The President of the Sovereignty Council, Lieutenant General Al-Burhan, and Lieutenant General Al-Hilu – Chairman of the Sudan People’s Liberation Movement – North signed the so-called Declaration of Principles between the Transitional Government and the SPLM, and the most prominent matter in this declaration was the separation of religion from the state, and the establishment of a civil democratic state in Sudan Federation, Article 2-2 states: [As we affirm the right of the people of Sudan in the various regions to manage their affairs through decentralization or federalism] and in Article 2-3: [Establishing a civil, democratic, federal state in Sudan that guarantees freedom of religion, religious practices and worship for all Sudanese people by separating cultural, ethnic, religious and regional identities from the state. No religion shall be imposed on anyone and the State shall not adopt any official religion. The State shall be impartial with regard to religious affairs and matters of faith and conscience. The State shall guarantee and protect freedom of religion and religious practices. These principles shall be enshrined in the constitution].

We in Hizb ut Tahrir / Wilayah of Sudan confirm the following facts:

First: Religion is practically separated from the state since the abolition of the Khilafah (Caliphate) on 28 Rajab 1342, corresponding to 03/03/1924, and that the alleged independence was nothing but a continuation of the secular life (separation of religion from state and society) that was founded by the English colonialist Kafir.

Second: The salvation system was not Islamic except in its slogans. The system of government was republican, the economic system was capitalist and controlled by global usurious institutions (the International Monetary Fund and the World Bank), and foreign policy was dependent on the international law, which is a charter of blasphemy.

Third: The current system (the transitional period) is a blatant secular system. Rather, it tracks every article in a law that has a connection to Islam, so it cancels it in an effort to satisfy the Kafir colonialist.

Fourth: The Declaration of Principles signed by Al-Burhan is the same agreement of principles that Hamdok signed with Al-Hilu half a year ago, and it was rejected by America’s agents, then they returned to sign it, which means that America wants to dominate the so-called peace file in which it has gone a long way, and has not very little remains to ensure complete victory over Europe’s agents, and that peace can only be achieved through Juba, and at the hands of the military themselves.

Fifthly: Standing against the projects of the Kafir West that make our country implement blatant secularism, and tearing it apart through the so-called federalism, and autonomy can only be done with serious work with Hizb ut Tahrir. To liberate the Ummah from the systems of unbelief, the colonists’ conspiracies and their offspring at home, by establishing Khilafah Rashida (the rightly-guided Caliphate) upon the method of the Prophethood, which cuts off the hands of those who tamper with the identity of the Ummah, but invades them into their own home, carrying goodness to them, and bringing them out of the darkness and greed of Capitalism, to the light and justice of Islam.

“O you who believe! Answer Allah (by obeying Him) and (His) Messenger (saw) when he calls you to that which will give you life, and know that Allah comes in between a person and his heart (i.e. He prevents an evil person to decide anything). And verily to Him you shall (all) be gathered.” [Al-Anfal: 24]