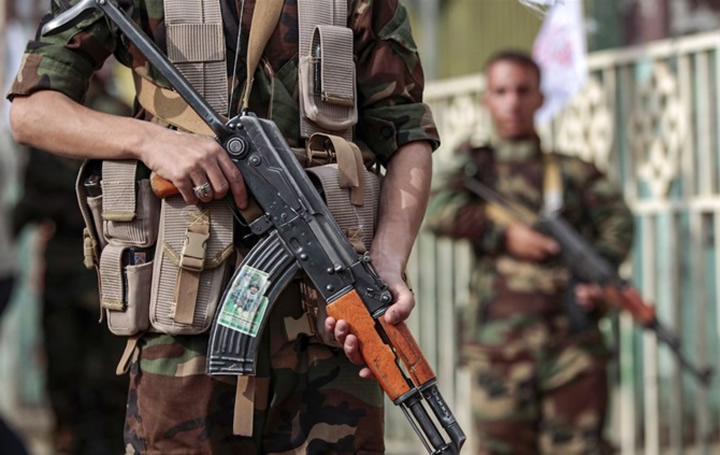 In northern Yemen, the Houthi oppressors in Sana’a, who claim to be the advocates of the Qur’anic march, arrested the Dawah carrier Ustadh Shaif Al-Shradi, 48 years old, and his two sons; Ayoub, age 22, and Muhammad, age 18, on Tuesday night, 23/02/2021, at 11:00 p.m. Even the disbelievers of Quraysh did not dare to do such actions, so they did not raid the house of the Master of Creation Muhammad (saw), the night of his Hijrah (emigration) and waited for him outside the house, fearing that the Arabs would not blame them and bring to them shame and insult. So, what is the case of those who say that they are advocates of the Qur’anic march, intimidating the Shabab of Hizb ut Tahrir who are working to establish the Khilafah (Caliphate) and cherish Muslims with Islam after the Kafir and his followers dominated Islam and Muslims, they stormed homes and frightened women and children, even the neighbors who stood in front of the security forces and said the word of truth were not spared, so two of them were arrested and are still in detention!

What is the crime of Ustadh Shaif, his two sons, and his neighbors for you to throw them in prison as if they were criminals?! Ustadh Shaif is known among the educational circles for his religion, knowledge, humility, and the love of teachers, students, and communities in which he lives with gentleness and good manners. Is this the care the Houthis provide for a teacher who has spent his life teaching students and suffers from a malignant tumor?! Instead of providing him with medicine and care, they threw him in prison, and on top of this and that he is the carrier of the call of good for Muslims to restore the state of Islam again, and his children are working with him and his neighbors have said the word of truth.

Hizb ut Tahrir is a leading light, it is known and not unknown. It has been working in the Islamic Ummah for nearly 70 years, but the oppressive regimes in Muslim countries and the world obscure its activities and fight its Shabab, and the arrests that occurred during this campaign in Turkey, Tunisia, Yemen and elsewhere are evidence of the regimes ’criminality.

This arrest at the hands of the oppressive Houthi coincides with the global campaign upon the centenary of the destruction of the Khilafah, where the Shabab of the party in several countries, including Yemen, carried out numerous actions, including placing posters in public places mobilizing the Muslims to restore the Khilafah, under the slogan “O Muslims, Establish it.” This is what angered them, so they carried out the unjust arrest.

This global campaign carried out by Hizb ut Tahrir under the direction of its Ameer, Eminent Scholar Ata Bin Khalil Abu al-Rashtah, may Allah protect him, calls on Muslims to establish the Khilafah after its 100-year absence, although the time limit for Muslims to establish a caliph to rule them by what Allah has revealed is not permissible to exceed three days; as the companions of the Messenger of Allah (saw) unanimously agreed on that. The Prophet (saw) said: «مَنْ مَاتَ وَلَيْسَ فِي عُنُقِهِ بَيْعَةٌ مَاتَ مِيتَةً جَاهِلِيَّةً»“And who ever dies while there were no Bai’ah on his neck, his death would be as that of the days of Jahiliyyah (ignorance).”