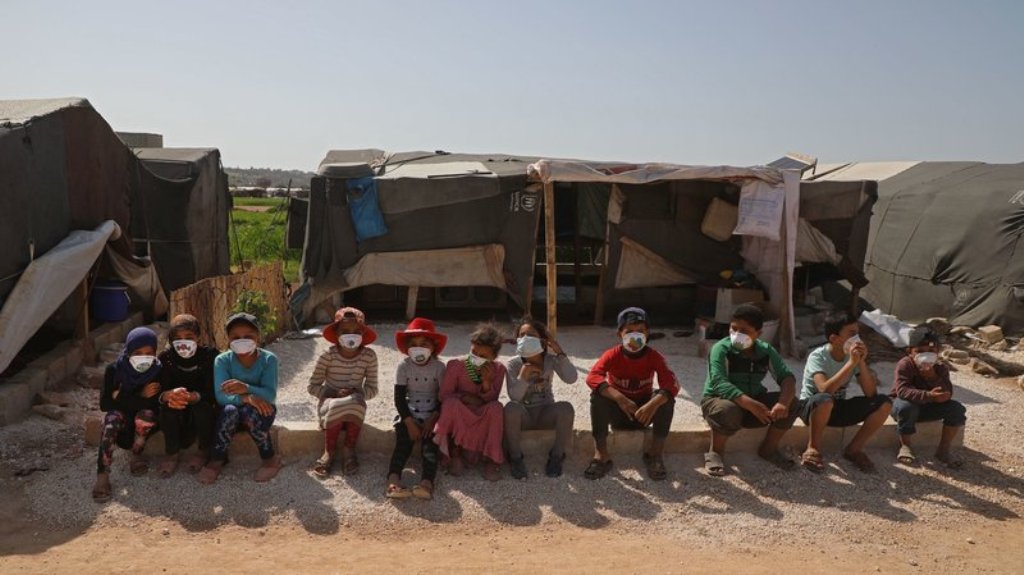 Caused by Coronavirus and War Affects Women and Children

According to the United Nations High Commissioner for Refugees, the war in Syria has killed more than half a million people, and has displaced and deported more than half of the country’s population internally and outside the country. Infrastructure has also been destroyed, the economy has been depleted and various sectors, including the health sector, have been exhausted, as more than half of the public hospitals and health centers in Syria became out of service, according to the World Health Organization.

In addition to all this suffering, Syria today faces an unprecedented hunger crisis with the outbreak of coronavirus and the rise in basic food prices to levels unseen even at the height of the nine-year conflict, where the rise in food prices reached 200 percent in under a year as the Syrian pound reached a record low against the US dollar. The United Nations program said on its Twitter account that “Record high food prices & now COVID-19 have pushed families in Syria beyond their limits”.

The United Nations has indicated that the spread of the Covid-19 epidemic complicated the situation and contributed to the high numbers of people suffering from malnutrition or lack of nutrition, with 9.3 million Syrians now suffering from food insecurity, compared to 7.9 million six months ago due to the humanitarian and economic impact of the Coronavirus outbreak, according to the World Food Program.

These appalling figures and other statistics show the deplorable and miserable situation that our people in Syria have reached, and also are indications of a real catastrophe in the humanitarian situation, especially with the irresponsible handling of the Coronavirus pandemic carried out by the brutal regime institutions in light of the deteriorating economic situation and the sanctions imposed on it, which will not afflict the ruling clique but rather the general public, which has increased them poverty, hunger and unemployment, as they must now stand in long lines to buy bread and other daily necessities. More than 90 percent of the population of Syria lives below the poverty line of two dollars a day while the humanitarian needs increase.

This is the tragic reality of our people in Syria, under this brutal regime that directed its weapons towards them and brought down on them its barbaric repression machine, so that people are eating waste remains, queuing in front of bakeries, eating foliage, sleeping on the streets and other misfortunes of the miserable life that has been imposed on them for many years.

The bitter reality that the people of Syria live in is not very different from what happens in the various Muslim countries on all political, economic and security levels, but rather every day that comes is worse than the one before it. We in Hizb ut Tahrir, the frontrunner that does not lie to its people, we reiterate and repeat when we hear the cries, the successive crises and the issued statistics, and we show that the reason for all of this is rulers who subject their people to the corrupt capitalist system that has proved its failure to find solutions and remedies for their problems. This is in addition to being the reason for the impoverishment of the people and starving them in the first place. It is the system that neglects people who desperately need immediate help. The Messenger of Allah ﷺ says: «فَالْإِمَامُ رَاعٍ وَهُوَ مَسْئُولٌ عَنْ رَعِيَّتِهِ» “The (Imam) leader of people is a guardian and is responsible for his subjects.” [Narrated by Bukhari].

The crises that the Islamic Ummah is going through today, rather the whole world, are not only an economic crisis, for money and wealth are in the land, but they are in the grip of hired rulers, the Almighty said: وَهُوَ الَّذِي أَنزَلَ مِنَ السَّمَاءِ مَاءً فَأَخْرَجْنَا بِهِ نَبَاتَ كُلِّ شَيْءٍ فَأَخْرَجْنَا مِنْهُ خَضِراً نُّخْرِجُ مِنْهُ حَبّاً مُّتَرَاكِباً وَمِنَ النَّخْلِ مِن طَلْعِهَا قِنْوَانٌ دَانِيَةٌ وَجَنَّاتٍ مِّنْ أَعْنَابٍ وَالزَّيْتُونَ وَالرُّمَّانَ مُشْتَبِهاً وَغَيْرَ مُتَشَابِهٍ انظُرُوا إِلَىٰ ثَمَرِهِ إِذَا أَثْمَرَ وَيَنْعِهِ إِنَّ فِي ذَٰلِكُمْ لَآيَاتٍ لِّقَوْمٍ يُؤْمِنُونَ “And it is He who sends down rain from the sky, and We produce thereby the growth of all things. We produce from it greenery from which We produce grains arranged in layers. And from the palm trees – of its emerging fruit are clusters hanging low. And [We produce] gardens of grapevines and olives and pomegranates, similar yet varied. Look at [each of] its fruit when it yields and [at] its ripening. Indeed in that are signs for a people who believe.” [Al-An’am: 99].

Money is Allah’s wealth and it is abundant and plenteous, but the crisis is that of the absence of Allah’s law on earth and the rule of human law and whims.

So, come to the support of Islam and the arbitration of Allah’s law, in which the minds and souls come to life, and the earth and those in it revive, and the best outcome is contentment in this world and the Hereafter. Ibn Majah and al-Bayhaqi narrated on the authority of Abdullah bin Omar, may Allah be pleased with him, who said: The Messenger of Allah ﷺ turned to us and said: «يَا مَعْشَرَ الْمُهَاجِرِينَ، خَمْسٌ إِذَا ابْتُلِيتُمْ بِهِنَّ وَأَعُوذُ بِاللَّهِ أَنْ تُدْرِكُوهُنَّ؛ لَمْ تَظْهَرْ الْفَاحِشَةُ فِي قَوْمٍ قَطُّ حَتَّى يُعْلِنُوا بِهَا إِلَّا فَشَا فِيهِمْ الطَّاعُونُ وَالْأَوْجَاعُ الَّتِي لَمْ تَكُنْ مَضَتْ فِي أَسْلَافِهِمْ الَّذِينَ مَضَوْا، وَلَمْ يَنْقُصُوا الْمِكْيَالَ وَالْمِيزَانَ إِلَّا أُخِذُوا بِالسِّنِينَ وَشِدَّةِ الْمَئُونَةِ وَجَوْرِ السُّلْطَانِ عَلَيْهِمْ، وَلَمْ يَمْنَعُوا زَكَاةَ أَمْوَالِهِمْ إِلَّا مُنِعُوا الْقَطْرَ مِنْ السَّمَاءِ وَلَوْلَا الْبَهَائِمُ لَمْ يُمْطَرُوا، وَلَمْ يَنْقُضُوا عَهْدَ اللَّهِ وَعَهْدَ رَسُولِهِ إِلَّا سَلَّطَ اللَّهُ عَلَيْهِمْ عَدُوّاً مِنْ غَيْرِهِمْ فَأَخَذُوا بَعْضَ مَا فِي أَيْدِيهِمْ، وَمَا لَمْ تَحْكُمْ أَئِمَّتُهُمْ بِكِتَابِ اللَّهِ وَيَتَخَيَّرُوا مِمَّا أَنْزَلَ اللَّهُ إِلَّا جَعَلَ اللَّهُ بَأْسَهُمْ بَيْنَهُمْ». “O Muhajirun, there are five things with which you will be tested, and I seek refuge with Allah lest you live to see them: Immorality never appears among a people to such an extent that they commit it openly, but plagues and diseases that were never known among the predecessors will spread among them. They do not cheat in weights and measures but they will be stricken with famine, severe calamity and the oppression of their rulers. They do not withhold the Zakah of their wealth, but rain will be withheld from the sky, and were it not for the animals, no rain would fall on them. They do not break their covenant with Allah and His Messenger, but Allah will enable their enemies to overpower them and take some of what is in their hands. Unless their leaders rule according to the Book of Allah and seek all good from that which Allah has revealed, Allah will cause them to fight one another.”

This is our situation today, O Muslims, but the duty that Muslims should work for today is to restore the glory and honor to Islam and Muslims by establishing the state of Muslims by the covenant with Allah (swt) and work with His Shariah and restore this Islam to life, and this can only be by applying Islam fully by establishing its state in one country and then seeking to annex other countries to that pivotal country, as the Messenger of the Ummah, prayers and peace of our Lord upon him, did.